Every Vote Really Does Count

Ken Blackwell
|
Posted: Dec 25, 2017 12:01 AM
Share   Tweet
The opinions expressed by columnists are their own and do not necessarily represent the views of Townhall.com. 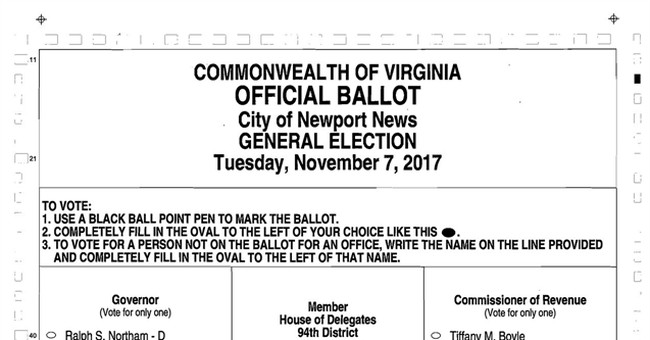 November’s election was not good for Virginia Republicans. Their 66-seat majority in the 100-member House of Delegates fell dramatically. To 50 or 51, depending on whether the equivalent of a coin flip comes up heads or tails. Really.

If anyone believes that their vote does not count, they should move to Newport News.

After the polls closed on November 7, the GOP was left with 51 House seats, but four races were especially close. Only ten votes separated incumbent David Yancey and challenger Shelly Simonds. Although three contests stayed Republican, a recount transferred the victory to Simonds. By one vote. Then a state court awarded a disputed ballot—one ballot—to Yancey, tying the race.

Which under state law now must be decided by lot. But the result does not just determine who represents the 94th House district. The victor in turn decides who controls the House. At 51, the GOP would retain a wafer-thin majority. At 50-50 the two parties would have to forge an unprecedented power-sharing agreement.

Such is the power of one vote in Newport News, Virginia.

Of course, this race is not the only one ever decided by one vote. In 1971 another Virginia delegate race was tied and in 1991 a Virginia delegate won by one vote. Last year a Mississippi House contest also ended up tied. In 1974 a U.S. Senate race yielded a victory margin of two votes. But none of them determined control of a legislative body.

Moreover, we don’t vote in isolation.

The 1960 presidential race was extremely close. If just one or two more Republicans turned out in every precinct across the land. Richard Nixon would have defeated John F. Kennedy in the popular vote.

Even more dramatic was the 2000 presidential race. George W. Bush was certified victor in Florida by 537 votes. Winning the Sunshine state gave him a 271-267 victory in the Electoral College.

Contrary to Democratic claims, the election was not stolen by Bush. The U.S. Supreme Court actually stopped the state supreme court from changing the rules after the election to favor the Democrats. Moreover, a consortium of media organizations reviewed the ballots and found that had Al Gore prevailed in court he still would have lost to Bush.

Those 537 votes constituted barely .009 percent of the nearly six million ballots cast. They were about ten votes in each of Florida’s 67 counties. They were less than one per precinct in Dade County, home to Miami. And they constituted just one vote in every 11 precincts across the state.

If only one more Democrat had shown up in every 11th precinct on November 7, 2000, Vice President Gore would have followed up his record of dubious fund-raising, shameless issue-flipping, environmental scare-mongering, and celebrated internet-creating with the presidency. (Wouldn’t that have been a fun time!)

Of course, most races are decided by larger margins. But we don’t know which races we can safely skip. Imagine if you were a loyal Republican who just didn’t feel like going to the trouble of voting in Newport News? You were tired. You wanted to sleep in. Work was a pain and you needed a drink afterward. Whatever.

Because you didn’t vote, your party lost not only the seat but control of the House of Delegates.

Close races also make election security especially important. The Daley and Johnson machines in Illinois and Texas convinced the dead to vote for Kennedy in 1960. In Virginia’s 94th just one improper—whether accidental or fraudulent—vote would shift the result. Thus, election security is for everyone.

The special U.S. Senate election in Alabama proved that ensuring only those who are eligible vote does not depress voting: the turnout of African-Americans was higher than expected. Election security measures previously approved by the Republican legislature protected minority voters like everyone else. A Gallup poll last year showed that nearly as many non-whites as whites, roughly eight of ten, supported election security.

While elections matter at any time, they are especially important now. President Donald Trump capped a busy first year as president by signing the Republican tax cut.

That’s obviously good news for Americans—working people usually don’t demonstrate against their taxes going down. But President Trump’s success has enraged the Left. (Of course, what doesn’t enrage the Left?)

Democrats will be gunning for every Republican on the ballot next year. It’s going to be a hard-fought election in which every vote counts.

No one should make the same mistake next November.