Free Trade Must Be Fair To American Workers

Ken Blackwell
|
Posted: May 31, 2017 12:01 AM
Share   Tweet
The opinions expressed by columnists are their own and do not necessarily represent the views of Townhall.com. 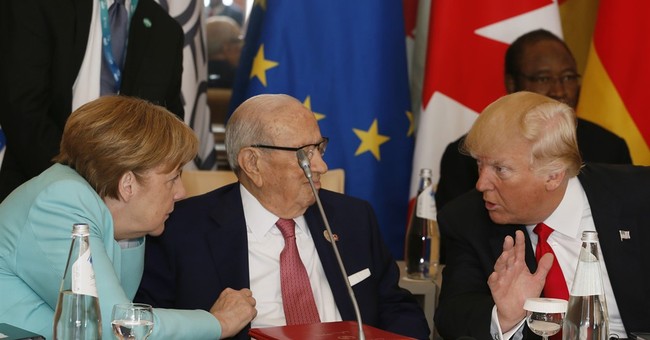 Trade with other nations is indispensable to America’s sustained economic vitality – and vital to maintaining our nation’s position of prominence within the global economy.   Over the last two-and-a-half centuries, American workers have consistently defined (and redefined) industry and innovation - giving rise to unprecedented opportunity and prosperity for generations of our citizens.

Last year alone our nation’s economy exported more than $1.45 trillion worth of goods to various points all across the world – accounting for nearly eight percent of our gross domestic product.   That’s $4,500 for every man, woman and child in our country.

Through countless economic reinventions, our workers have proven they can compete with anyone, anywhere – in any market.

They’ve even battled back in the aftermath of the Great Recession – raising annual exports by 37.6 percent even as elected officials and appointed bureaucrats in Washington, D.C. have been rigging the rules of the game against them.

During his 2016 presidential campaign, president Donald Trump exposed the extent to which America’s economy has been under attack from within – hamstrung by a political class that views “free trade” as an excuse to subsidize the offshoring of American jobs. Trump specifically singled out failures associated with the North American Free Trade Agreement (NAFTA) – which has governed macroeconomic exchange on our continent for the past quarter century.

“The U.S. has a $60 billion trade deficit with Mexico,” he noted earlier this year.  “It has been a one-sided deal from the beginning of NAFTA.”

In addition to this fundamental inequity, another problem with NAFTA is our government’s failure to enforce its rules.   What was supposed to be a two-way street has instead become a maze of shortcuts taken by Mexican businesses eager to capitalize on Washington’s lack of resolve on behalf of its workers.

Two years ago, the U.S. International Trade Commission found Mexico guilty of illegally dumping subsidized sugar into the American market over a period of four years – crippling the ability of U.S. sugar farmers to compete.  Specifically, investigators with the U.S. Department of Commerce determined that these subsidies enabled Mexican companies to sell their sugar in our country at just sixty percent of fair market value.

“If other countries want to sell in the U.S. market, they need to play by the rules,” U.S. Rep. Charles W. Boustany Jr. of Louisiana said at the time, adding that “Mexico’s sugar industry has been cheating on our agreements for some time.”

It’s not just sugar, either.  Mexico has followed the same subsidized dumping pattern on everything from tomatoes to clothes washers to steel pipe.

Trump’s administration has given Mexico until June 5 to come into compliance with the law on sugar trade – but so far its government has balked, blaming “excessive demands from U.S. producers and refiners.”  Never mind that these so-called “demands” were part of the deal to which both nations affixed their signatures in the first place.  Mexico has even gone so far as to threaten a blockade against lawful exports of U.S. corn unless it is permitted to continue illegally dumping its subsidized sugar and other products on the American market.

Such crude attempts at economic blackmail give “free trade” a bad name.  But the costs in this case are far from rhetorical.  Unlawful Mexican sugar dumping has cost our economy more than $4 billion in revenue – and has resulted in the loss of thousands of U.S. jobs.  Last year in Hawaii, for example, the sugar cane industry was forced to shutter completely after nearly two centuries of continuous operation – sending hundreds of Hawaiians to the unemployment lines.

“If you told somebody in 1950 when sugar was the absolute foundation of the entire economy in the Hawaiian islands that the day was going to come when sugar was going to end they would not have believed you, it would be impossible to comprehend,” one local historian said.

What is truly impossible to comprehend?  A government that has allowed this to happen.

Earlier this year, U.S. Commerce secretary Wilbur Ross signaled a change in tone coming out of Washington.  In responding to a similar case of subsidized dumping involving rebar from Japan and Turkey, Ross had some encouraging words for American workers.

“The United States can no longer sit back and watch as its essential industries like steel are destroyed by foreign companies unfairly selling their products in the U.S. markets,” Ross said. “We will continue to take action on behalf of U.S. industry to defend American businesses, their workers, and our communities adversely impacted by unfair imports.”

Let’s hope he is as good as his word in dealing with Mexico’s ongoing dumping of subsidized sugar and other products.  American workers can compete with anyone - but they can't compete if our own government is rigging the game against them.