History Shows that Iran Nuclear Deal is a Bad Deal 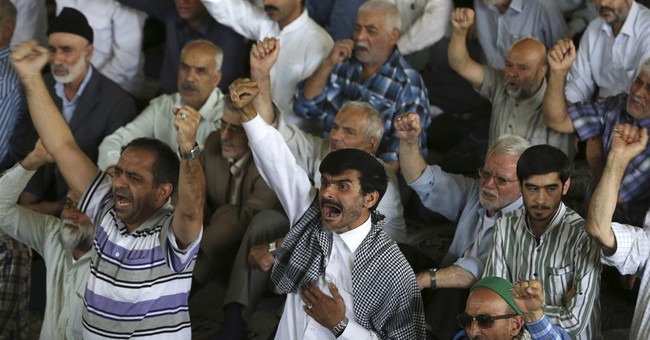 Edmund Burke famously said, “Those who don't know history are destined to repeat it.”

This could not be more relevant to the debate raging over the Iran nuclear deal.

On Oct. 21, 1994, President Bill Clinton announced a deal with North Korea aimed at ending its pursuit of a nuclear weapon. “This is a good deal for the United States,” Clinton said. “North Korea will freeze and then dismantle its nuclear program. South Korea and our other allies will be better protected. The entire world will be safer as we slow the spread of nuclear weapons.”

Before addressing questions by journalists, Clinton concluded his remarks by saying, “The United States and international inspectors will carefully monitor North Korea to make sure it keeps its commitments. Only as it does so will North Korea fully join the community of nations.”

Twenty one years later, from the exact spot in the White House, President Obama said, “Iran is permanently prohibited from pursuing a nuclear weapon under the Nuclear Non-Proliferation Treaty, which provided the basis for the international community’s efforts to apply pressure on Iran.”

“Inspectors will have access to Iran’s entire nuclear supply chain — its uranium mines and mills, its conversion facility, and its centrifuge manufacturing and storage facilities,” Obama assured the world. “This ensures that Iran will not be able to divert materials from known facilities to covert ones. Some of these transparency measures will be in place for 25 years.”

The result of the North Korean agreement became clear on Oct. 9, 2006, when North Korea took the world by surprise and conducted its first successful test of a nuclear weapon.

The verdict is yet to be determined on the Iran agreement. But the North Korea experience is a good reason for concern.

The 1994 agreement was a blunder. But if North Korea was an honest mistake, there is no excuse for a bad Iran deal.

Due to efforts and huge risks by the National Council of Resistance of Iran (and its major constituent, the MEK and other intelligence sources) a lot has been exposed about Iran’s clandestine nuclear program. Even what is already known leads us to the conclusion that trust is totally misplaced. The ayatollahs have been masters of deception and deceit over the past decade regarding concealment of their nuclear program from the IAEA.

Even if one accepts the administration’s arguments at face value, the issue is very simple: All the administration has done is kick the can down the road, and the world faces the same predicament a decade from now. It has not solved any issue. While it could have squashed the Iranian nuclear threat once and for all, instead it squandered the opportunity by repeatedly providing unwarranted concessions.

For any possible deal with such a regime, the key is verification. And “anytime, anywhere” access to all suspicions sites, military, or non-military is part and parcel of any reliable verification regime. But the agreement provides room for 24-day notice to the regime and expects the IAEA to explain its suspicions and intelligence to Tehran. But former senior IAEA officials have acknowledged that Iran has successfully erased evidence of its nuclear work in the past when given advance warning. There is every reason to assume that it will attempt to do so again.

The reality is that Tehran came to the negotiating table from a position of utter weakness and not due to a change of heart by Tehran’s leadership. It had its back against the wall. Over-stretched by three regional wars, with a restive population, particularly among the young and the women, and an economy on the verge of collapse, it was not in any position to seek concessions.

A better deal could have been had. We know this because of the power imbalance of those at the table; we also know it because of the effectiveness of the sanctions regime put in place after years of hard work.

But the most important flaw in the Obama administration’s argument is the narrative that this agreement was the only alternative to war.

Isn’t this what Tehran wants the world to believe? Why not go for a tougher deal? And more importantly, why not reach out to moderate Iranians in the interest of changing the regime? If the US wanted to exert pressure on the ayatollahs, this would have been the most effective way.

The Iranians showed that they loath the regime in 2009. They came out in their millions crying for freedom. They have an organized resistance in the National Council of Resistance of Iran. They have an identifiable leader, Mrs. Maryam Rajavi with a solid base of support at home and abroad, and a program for a democratic future.

Maryam Rajavi leads the same movement that has acted as the eyes and ears of the world in exposing some of the most sensitive aspects of Iran’s clandestine nuclear program. Support for that movement would have undoubtedly made the regime feel as though it needed to compromise for its own survival. All politics is always local, even for the ayatollahs.

The regime is so fragile that despite unwarranted concessions by the Obama administration, Iranian Supreme Leader Ali Khamenei eventually compromised on a number of his “red lines.”

The moment should be seized. Tehran is weaker than ever before. So they will try to compensate for it by stepping up repression at home, intensifying financial and logistical support for terrorist groups, and so on.

Let’s be clear. The issue before us is not a partisan issue. It is a matter of grave national security concern for all Americans. What is at the stake is the future of our nation, the Iranians and the region.

The ball is now squarely in the court of the US Congress, the true representative of the American people, which must make a decision by mid-September on this bad deal. It is time for the American people to tell their elected officials that it is a bad deal. This is the American and democratic way of doing politics. Congress should keep the pressure on the Ayatollahs on all fronts including their human rights abuses in Iran, their egregious conduct in the region, their support for terrorism, and their ballistic missile program. One lesson from this whole process is that if we keep real pressure on the Ayatollahs, they will cave in.

President Obama does not appear to know the history of nuclear proliferation. But that is no reason why the country as a whole should be destined to repeat it.