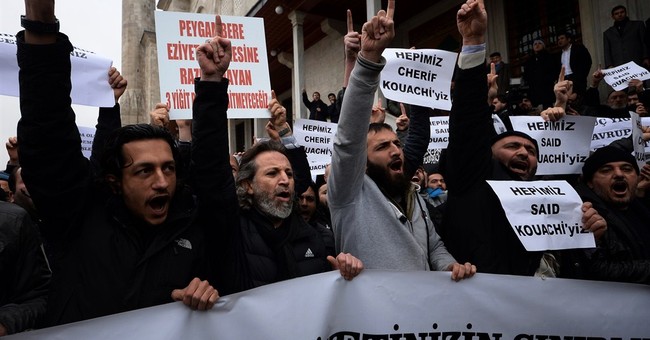 The world stopped recently as journalists in Paris were coldly, coolly gunned down by Islamists bent on crushing everyone else’s freedoms. Millions in France turned out to march to defend freedom of speech. And they should.

But in the same week, we learned that upwards of two thousand Christians had been butchered in Nigeria by Boko Haram, the jihadist terror group bent on destroying freedom in Africa’s largest nation.

In the Mideast, Christians are routinely murdered, we see even children beheaded by ISIS and Al Qaeda. Pakistan, Afghanistan, Iraq, countries on whom American taxpayers have lavished billions in foreign aid, provide no protections for their Christian minorities.

We live in an era of unprecedented violence against Christians and Jews. Israeli homes and schools have come under rocket attack daily from Hamas in Gaza. Hamas is the Muslim Brotherhood’s Palestinian branch. Jews are being driven from France. Even before these latest terrorist attacks, including four killed in a kosher deli in Paris, France was the country of origin for 7,000 Jews who emigrated last year to Israel.

Here in the U.S., our first freedom is under assault. The Obama administration has issued HHS Mandates that force us to subsidize the killing of unborn children. It’s not enough that this is the most pro-abortion administration in history, that it spreads its lethal pro-abortion message with U.S. foreign aid dollars to Africa and throughout the world. President Obama now wants to overturn the protections of the Hyde Amendment and force us all to violate our consciences as he “fundamentally transforms this country” by paying for the killing of 3,000 unborn children a day.

We saw the firing of Atlanta's Fire Chief Kelvin Cochran. Chief Cochran’s record of achievement was without reproach. He had risked his life for his fellow Atlantans throughout a distinguished career. But because he wrote a book about his Christian faith, because he expressed his personal view that sex between men was wrong, Chief Cochran was fired. Chief Cochran based his belief on Scripture’s clear teaching.

In launching the Montgomery bus boycott that sparked the modern Civil Rights movement, Dr. King said this: “I want it to be known throughout Montgomery and throughout the nation that we are a---Christian people…And we are determined here in Montgomery to work and fight, until justice runs down like water and righteousness as a mighty stream.”

Dr. King cited Scripture as his inspiration. Today, in his home town, Chief Kelvin Cochran is threatened with loss of his job, loss of his stature in the community, loss of his human right to think and speak freely.

We must recognize that the pink panzers of political correctness threaten all of us. There are even Americans who have a same-sex attraction who nonetheless oppose marriage for men and men. Even these Americans will find their freedom of speech and press under attack.

James Madison celebrated the passage of the Virginia Statute for Religious Freedom in 1786 by writing to Thomas Jefferson in Paris. Madison said we had “extinguished forever the ambitious hope of writing laws for the human mind.”

But that’s what the pink panzers of political correctness does. It seeks to crush all public expression of opposing views. It’s why we will see a White House summit on “violent extremism” that dares not mention jihad or Islamist violence because such realities are not politically correct. Controlling public speech is the first step to controlling private thought.

Madison was clear on the link between civil and religious freedom. The guarantees for civil freedom in the Constitution, he wrote in Federalist 51, are the same as those for religious freedom—in the “multiplicity of sects.” For us, that translates as diversity. Our diversity is not simply of colors, races, or sexes, but an American diversity of ideas and expression.

Think of Christians as the canary in the coal mine. When the canary dies, you know it’s unsafe for the miners, too. Free exercise of religion is the First Freedom mentioned in the First Amendment. That’s because the Founders recognized that all civil freedom is based on that firm foundation of religious freedom. When religious speech is suppressed, all civil freedom is threatened. And it has never been as threatened in America as it is today.