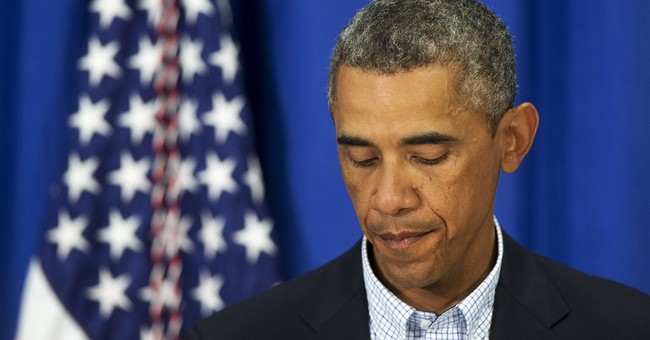 Editor's Note: This column was column authored by Bob Morrison.

Israeli Prime Minister Benjamin Netanyahu is too strong. PLO boss Mahmoud Abbas is too weak. That’s why we can’t get a peaceful settlement of the Arab-Israeli conflict, says President Obama in an interview with the ever-serious Tom Friedman of the New York Times. The president seems to be confusing Mideast politics with Goldilocks. The peace porridge is too hot (Netanyahu). It’s too cold (Mahmoud Abbas). But with Mr. Obama’s Goldilocks policy, it’s just right. Actually, his Mideast isn’t just right. It’s mostly wrong. Mr. Obama’s thinking about the Mideast is fully on display in this disturbing interview. If we wonder why the Mideast has also been described as a Bloody Crescent, we have only to consider how Barack Obama views the world. The president thinks that the strength of Netanyahu stems from his tough stance against Hamas and its bedfellows, the so-called Palestinian Authority (PA). The PA is a creation of Western diplomacy, eager to tamp down the violence and terrorism of the Palestine Liberation Organization (PLO), or Fatah. The PLO, in turn, was the creation of the late Yasser Arafat, the man who invented airline hijacking for terror purposes. The PLO promised to eschew terrorism, recognize Israel’s right to exist, and start trading land-for-peace. That was in 1988. In the quarter century since then, the PLO has merely subcontracted terrorism. Mahmoud Abbas, who became PLO/Fatah chief following the death in 2004 of Yasser Arafat, submitted himself to “election” just once, in 2005. Since then, he has canceled scheduled elections and rules by decree, or, more accurately, by consent of the European Union, the U.S. State Department, and the UN. The PLO has never formally agreed to the existence of Israel as a Jewish state. Arabs may already have twenty-two states but the Jews may not have even one, according to Abbas, according to the Arab League, and according to all too many anti-Semitic mobs in Europe today. When the PLO spokesmen tell reporters they agree to the existence of Israel, it is a classic example of taqiyya, that is, the doctrine that one may legitimately deceive an infidel if that is necessary for the eventual triumph of the true religion. In this case, that would be Islam. The “Israel,” these PLO spokesmen say they accept is a state in which millions of Arabs claiming descent from the pre-1948 residents of the British Mandatory territory of Palestine can exercise a right of return and flood into present day Israel. President Obama wants Abbas and the PLO to be stronger. So does Abbas. He wants Netanyahu to be weaker, so that he can take on the Israeli settler movement. What this means is that Netanyahu should be forced—by pressure from the Obama administration, the EU, and the UN—to give away territory in Judea and Samaria to the PLO. Mr. Obama wants Netanyahu to take “risks” for peace. And he cites Egypt’s President Anwar Sadat and Israel’s Prime Minister Yitzhak Rabin as examples of those leaders who took such risks. Like President Obama, both of these men were recipients of the Nobel Prize for Peace. Unlike President Obama (and for this we thank God) both men were assassinated! Giving away territory in Judea and Samaria on the West Bank of the Jordan River has never advanced peace on inch. Jews have lived in Judea and Samaria since Bible times. This is the historic heartland of the Jewish people. If Jews cannot live in Judea and Samaria, why should they be entitled to live in Tel Aviv and Haifa? Those coastal cities are relatively modern creations. Judea and Samaria are not only historically Jewish, they aretopographically indispensable. If they are ceded, then the coastal plain becomes ever more indefensible. As Americans, we should understand this. Pickett’s Charge, the climactic moment in the Battle of Gettysburg, was staged against the Union stronghold on Cemetery Ridge on July 3, 1863. There are many modern examples of losing wars by losing the highlands. The French defeat at Dien bien phu comes readily to mind. Mahmoud Abbas—in a vain bid to become stronger among his own militant coalition partners—publicly pledges to remove all Jews from Judea and Samaria. This is what ISIS is doing in Syria and Northwest Iraq—as well as crucifying Christians. Since when has the U.S. been willing to financially and diplomatically support creation of a Jew-free territory? In World War II, this goal of Hitler’s Nazis—marking out a Judenrein in Poland and Ukraine—was accomplished only with mass murder. Does President Obama really intend to support a new Judenrein in Judea and Samaria? If so, he should say so. But he won’t. So, let us thank God that Netanyahu is too strong and Abbas is too weak. We should also be grateful to the American people. In his Times interview, President Obama noted, with becoming modesty, that Netanyahu’s public approval numbers “are higher than mine.” Presumably, the president meant the Prime Minister’s standing among Israelis is higher than his own standing among Americans. It would be interesting to see a poll of Netanyahu’s approval numbers among American voters. Happily, President Obama senses he lacks public support to vigorously pursue his Mideast Goldilocks Policy. To which we say, in a happy Hebrew word: Amen!