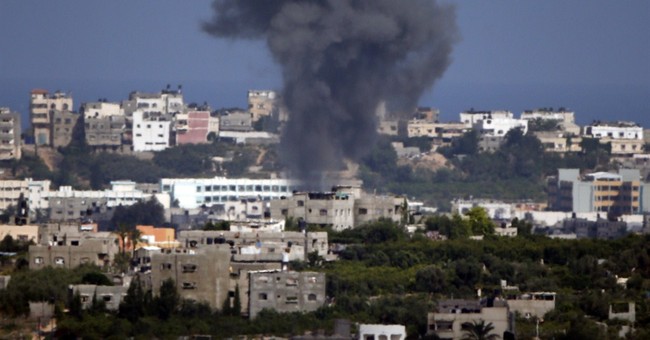 “Israel hits Gaza Homes.” The sub-head said: “Children and women killed.” This headline will be defended by all good journalists as no more than describing what happened in the seemingly endless clash between Arabs and Israelis. They will argue that when Israel its homes in Gaza, it is news. When Hamas rockets rain down on Israeli cities and towns—and homes, schools, and hospitals, it is not news. It happens ever day, so it becomes like a weather report. Thousands of Hamas rockets have been fired at Israeli homes. Thousands. This coverage brings to mind the old French saying: This animal is very wicked; when you attack it, it defends itself.

The late Ambassador Jeane Kirkpatrick saw all this coming. Her seminal article in the pages of Commentary Magazine in 1989—now twenty-five years old—was prophetic. “How the PLO was Legitimized” showed how Yasser Arafat’s PLO ((Palestine Liberation Organization) used the tools of international diplomacy to “dumb down” international law on the targeting of civilians and the deliberate use of terrorism as a tactic for pushing one’s way to power.

Amb. Kirkpatrick’s article begins: “Some leaders win power through inheritance, some through elections, some through civil war or coup d’état. Yasir Arafat and the PLO are trying something different. They are attempting to come to power through international diplomacy—reinforced by murder. And they have nearly succeeded.”

Reading Kirkpatrick’s article, which shows the long march of the PLO through the institutions of the UN in the 1980s, is like reading that other tortured rationale for homicide, Roe v. Wade (1973). In fact, these might be called parallel paths to the acceptance of mass killing of innocents.

Domestically, the U.S. Supreme Court removed the protections afforded to unborn human beings by classing the child in the womb as a non-person under the law. In international law, the conventions against piracy and terrorism were amended, in effect, to say that if you were engaged in a struggle of “national liberation,” you could legitimately target civilians in airliners, pizza parlors, hotels, beaches, schools, kindergartens. Or hospitals.

The PLO had done all of that for twenty-five years prior to its admission to international forums. The PLO’s asymmetric warfare continued unabated after it changed its public face to the PA. What the PLO did, quite simply, was to subcontractterrorism.

Today, the PLO is headed by Mahmoud Abbas, the loyal lieutenant of Arafat, who died in 2004. For a quarter of a century since 1989, the PLO/PA has gotten diplomatic recognition as a legitimate voice of the Arabs living in Gaza and Judea and Samaria, on the West bank of the River Jordan. Promising to give up terrorism, the PLO has been showered with foreign aid, from the United States, from the European Union, and from the UN. America alone has provided billions in assistance to the PLO/PA.

For what? The PLO continues to teach a genocidal ideology in the schools it controls. It continues to lionize as “martyrs” suicide bombers. Abbas attends ribbon cuttings for public squares and schools named for these mass murderers. In PA-controlled regions, the flaming Twin Towers of the World Trade Center were jubilantly celebrated on 9/11. People fired their AK-47s in the air, danced in the streets, and gave candy to their children when thousands of Americans were murdered in Manhattan and in the Pentagon.

Still, administrations of both parties have treated the PLO and Mahmoud Abbas as if he were a true “peace partner.” Most recently, the PLO has bedded down with Hamas. Hamas won the “elections” in Gaza in 2006. Hamas is the Gaza branch of the Muslim Brotherhood. It is openly and unapologetically committed to the eradication of Israel.

The PLO, meanwhile, simply soft-pedals its own genocidal objectives. It has yet to remove from its charter and its seal the words and symbols that show its ultimate goal: They want a Palestinian state stretching from the Jordan to the Mediterranean Sea, a contiguous territory with no Israel and no Jews. The Nazi goal of World War II—creating a Judenrein—a region with no Jews—in Europe would thus be achieved in the Mideast. And we Americans would be helping to pay for it.

Policy “experts” from our State Department pretend not to see this PLO/PA eliminationist objective. They pretend that Jerusalem in not the undivided capital of Israel. Israel is thus the only state in the world that is denied the right to name its own capital. When Germany reunited in 1990 and named Berlin—Berlin!—as its new capital, our State Department quietly packed up its bags and moved the U.S. Embassy from Bonn to Berlin.

The Obama administration should have used the PLO’s forming a coalition government with Hamas as the necessary pretext for cutting off all U.S. aid to the PLO/PA. After all, we have listed Hamas as a terrorist organization.

But no. The State Department’s weaselly circumlocution tells us that because Hamas has only contributed “technocrats” to the running of the coalition, we can continue the charade. And we can continue to pay for this game of charades.

Secretary Kerry should read Hannah Arendt’s classic work: Eichmann in Jerusalem: A Report on the Banality of Evil. There, he will learn that Adolf Eichmann was really just a technocrat, too. He was concerned mostly with transportation and housing and railroad schedules. The mere fact that he sent millions to their death at Auschwitz is almost incidental to his life story—as he saw it.

Liberals used to understand all this. Hannah Arendt’s reports from Jerusalem originally ran in The New Yorker. From those reports, literate liberals understood that eliminationist anti-Semitism is a real force in the world and must be confronted and not cosseted.

The continued bias of our media, the continued treatment of the PLO as a legitimate party to Mideast negotiations, is a source of wonder. When we look back to the 1930s, we ask ourselves: “How could they be so blind?” When we look to our own media and State Department mumblers and bumblers, we have our answer: That’s how!