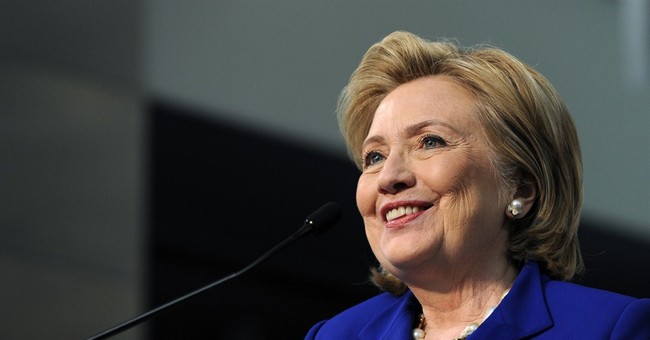 “I’m ready for Hillary,” read the bumper stickers in fashionable Georgetown, the swankiest part of Washington, D.C. These messages are juxtaposed with many a tattered “2012” bumper sticker with the fading Obama logo. Are these plugged-in liberals telling us their dream has faded, too? The never-quite-retiring Barbara Walters spoke to their disillusion when she wistfully sighed: “We thought he was going to be the new Messiah.”

So, buoyed by public opinion polls showing her the most popular politician in America, Hillary Clinton launched her latest “listening tour” with a new book. It was supposed to be a non-campaign rollout. But it turned out not so promisingly.

Liberal journalists have panned her performance on the stage. Her first stumble was in announcing to Diane Sawyer that she and Bill had left the White House in 2001 “dead broke.” She tried to gain sympathy and show empathy through poor-mouthing. Not since Mitt Romney announced he “likes firing people” in the midst of 10% unemployment has a supposedly serious politician so badly gauged the popular mood. Hillary was hit with unfavorable stories recalling the fact that she left the Executive Mansion with a paltry $8 million book advance. And Poor Boy Bill would soon snag another $15 million for his book. Then, of course, there were the speeches, lots of speeches, at $200,000 a pop.

Determined not to let her role in the Benghazi affair dominate her “rollout,” the former Secretary of State went to what she presumed would be friendly interviewers. But she had to “walk back” her poor little rich girl comments to Diane Sawyer. That’s never a good thing when you are supposed to show mastery and competence. That stumble prompted a spate of stories about how rusty she was on the hustings.

Then, rather unexpectedly, she ran into a buzz saw on NPR, of all places. Terry Gross of “Fresh Air” put Hillary on the spot. First, she pressed her on her vote as a U.S. Senator in 2003 to authorize President Bush’s use of force in Iraq. In time, she said, she became disillusioned by Bush’s actions in Iraq. She explained:

I did not believe that it was in the best interest of our country, and it was not something that I any longer wanted to be associated with.

How does that work? You are one of a hundred Senators tasked with deciding whether the United States goes to war or not. You vote to go to war. And when the war does not go well, you no longer want to be associated with it? Isn’t that the definition of irresponsibility? Isn’t it the adult thing to take responsibility for your actions, especially actions that were debated seriously and heavily documented before, during, and after the decision was made?

Then, Hillary was hit by a question out of left field: “You made LGBT rights a priority,” reporter Gross began. You included “transgendered people in your advocacy.”

“LGBT includes the T,” Clinton answered. Many foreign leaders, she said, did not want to include these people in their human rights laws.

“You made it easier for Americans to change their sex on their passports,” reporter Gross asked, “but you did it quietly.”

“It was not a big secret,” Clinton answered. “I had responsibility for the 70,000 employees of the [State Department] around the world.”

“I did not support gay marriage when I was in the Senate and when I ran for president in 2008, as you know,” Hillary Clinton added.

But when Terry Gross ventured to suggest that she failed to support marriage for homosexual couples out of political calculation, Hillary pushed back. “I think you are reading it wrong,” she rejoined.

“The [Defense of Marriage Act] was signed by your husband,” Terry Gross probed. “My husband was first to say [he was wrong about DOMA], she answered.

“The vast majority of Americans were just waking up to this [marriage] issue. It has been an extraordinarily fast legal and social transformation,” Hillary exulted. “Marriage equality is solidly established, except for Texas.”

“Your opinion changed,” Terry Gross tried to get Hillary to say. “You changed your mind.”

Hillary: You are playing with my words. I repudiate it. It is not true that I privately supported marriage but publicly opposed it.

Then, from her public record of opposition to couples of the same sex marrying, and her “repudiation” of Terry Gross’ question that she may have privately favored it, we can only conclude that as recently as 2008, Hillary Clinton was against this proposition.

So she now vigorously maintains she was wrong on Iraq and wrong on marriage. And this is a qualification?

Would-be challengers to “Hillary the Inevitable” can only be inspired by her troubled launch of her book tour. Long-time observers already recall the stumbling debut of Sen. Ted Kennedy in 1979. Every poll that year showed Kennedy would blow away the beleaguered Jimmy Carter.

Every poll, that is, except the poll of primary voters of 1980. Kennedy’s inability to answer the simplest questions from friendly interviewers had him tripping over his own tongue at the starting gate. He never fully recovered.