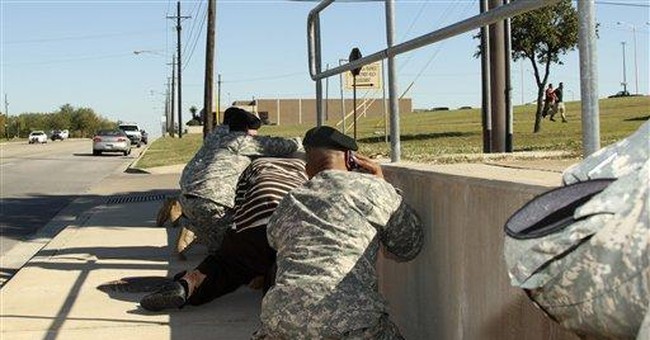 Conservatives in Congress need to move quickly to staunch the flow of blood, literally, in our military. The Fort Hood shootings proved convincingly that political correctness is lethal. Army Chief of Staff Gen. George Casey ran to the Sunday talk shows to say it would be a “tragedy” if our diversity were a casualty of this incident. No, General, it was your misguided approach to diversity that led scores of officers to look the other way as Nidal Hasan breathed mutiny and sedition daily—for years.

All service members take an oath—before God—to defend the Constitution “from all enemies, foreign and domestic.” That oath must be enforced. Up and down the chain of command, our all-volunteer military personnel must know that we will have their backs. It does not matter if the service member is a Christian, a Jew, a Muslim, a Hindu, or a Buddhist. There can be only zero tolerance for terror and for terror sympathizers.

Nidal Hasan presented power point lectures on why jihad was right! He had a business card printed with “Soldier of Allah!” He yelled “Allahu Akbar” as he murdered 14 Americans on his shooting rampage. And yet, under this bewildered administration, the official Department of Defense investigation of the incident never mentioned Islamist violence or jihad. This must end.

Conservatives in Congress should investigate the missed signals, the warnings unheeded in this worst case of domestic terrorism since 9/11.

Second, conservatives in Congress should not allow rogue federal judges to rule on the status of avowed homosexuality in the ranks of our military. To have a low-level federal judge presume to rule on the military is a serious breach of the Constitution. Article I, Section 8, Clause 14 states: “The Congress shall have Power to…make rules for the Government of the land and naval Forces…” Clearly, unambiguously, the Constitution gives to Congress the power to regulate the military.

It would be equally inappropriate for the courts to rule that homosexuals may not serve in our all-volunteer force. The power to decide such questions is given to Congress and to no one else. Many candidates are on the hustings proclaiming themselves “constitutional conservatives.” Good for them. I hope they will reassert Congress’ constitutional power over the military.

Third, we must stop giving in to the worldwide campaign of propaganda put out by the Palestine Liberation Organization (PLO). Conservatives in Congress should move quickly to cut off the $900 million this administration promised to give to the notoriously corrupt and brutal PLO. This is an outfit that invented airline hijacking for terror purposes. They promised twenty years ago to recognize Israel’s right to exist. They have never kept that promise. Even now, Prime Minister Benjamin Netanyahu is offering to halt or slow Jewish settlement on the West Bank of the Jordan River if the Palestinians will only keep the commitment they made in 1989. They won’t. He shouldn’t.

This administration found one program it could cut: the D.C. Opportunity Scholarships for poor children in Washington, D.C. That was a mere $13 million. But it says it can find $900 million for “humanitarian aid” to the PLO. Most of those millions will be stolen. The rest will go to schools named for suicide bombers and to hospitals used to store rockets. Cut off aid to the PLO.

Third, stop construction of the Ground Zero Mosque. Americans have been told endlessly that “of course they have a right to build it there; it’s just not appropriate.” This is not a matter of etiquette, of playing well with others, of making nice in all our diversity. This is a matter of national security.

Imam Rauf has been seeking funding for this mosque throughout the Middle East. He’s in league with some of the most repressive and brutal regimes on earth. It makes no sense to fight a war on terrorism abroad while allowing Islamists to do a victory dance at Ground Zero. Just because Imam Rauf is soft-spoken doesn’t mean he’s “moderate.” What he says in his soft-spoken voice is that the U.S. had it coming. He threatens us in our own country, saying it would not be good for America’s national security to deny him permission to build on that site. We’ve seen this act before. Marlon Brando did it better as the Godfather. “It could be very unhealthy for you not to give us what we want,” said that “capo di tutti capi.” Let’s say NO to threats, NO to Islamists, and NO to building any more sedition centers.

Finally, let’s overhaul the entire immigration and naturalization process. We need to secure the borders, to be sure. President Obama made a big show of sending just 1,200 troops to the U.S.-Mexican border.

By way of comparison, Gen. Grant sent 50,000 battle-tested troops to the Mexican border in 1865. That was to show the French who had invaded Mexico we meant business. We sent those 50,000 after the bloodiest war in our history. Our country may have been exhausted, war-weary, and deeply concerned about binding up the nation’s wounds. But we were serious about maintaining secure borders.

Americans should welcome immigrants, but only those who are legal and loyal. I don’t know how a Feisal Shazad—the Times Square bomber—becomes a naturalized citizen. I don’t know how an Imam Rauf becomes a U.S. citizen. But we need to make sure that those whom we allow to live among us will obey our laws and respect America’s traditions. We need to have no more Islamists admitted.

Religious diversity is not a new problem for our country. Catholics and Jews were included in the protections of our Constitution from the start. “No religious test” meant men like John Carroll, a Catholic landowner from Maryland, could serve in our first U.S. Senate. It meant that Uriah Philips Levy could rise to the rank of Commodore in our Navy, the first Jew to attain that rank.

We don’t have to apologize for our record. Mormons were told in no uncertain terms in the nineteenth century that we would not accept their practice of polygamy. They had fifty years in the desert, in Utah Territory, to reconsider. When the Mormons decided to enter the Union, they were welcomed—by giving up polygamy. Today, Mormons are among the strongest defenders of marriage as the union of one man and one woman.

Similarly, German-Americans, many of them Lutherans, were torn in their loyalties before World War I. They were unwilling to support the U.S. entering the Great War on the side of British imperialism and French colonialism. But when the Zimmermann Telegram proved without a doubt that Kaiser Germany was plotting to carve up the U.S. and give Texas, New Mexico, and Arizona back to Mexico, thousands of German-American pastors loyally joined the demand for war with Germany. And tens of thousands of their parishioners served faithfully in our army and navy.

These are the models we should hold up for immigrants of today. America is not a hotel. Still less is it a staging ground for jihad. If immigrants are loyal and legal, they should be welcomed. If they are here to plot against us, they should be expelled.

These are some of the no-nonsense reforms that I hope conservatives in the new Congress will pursue. Americans have sent a strong message with their votes this fall. Polls show that a majority would like to see a viable third party. This could be the Republicans’ last chance to prove they are capable of delivering on the bold promises they made on the campaign trail.