Hail to the Chief Justice 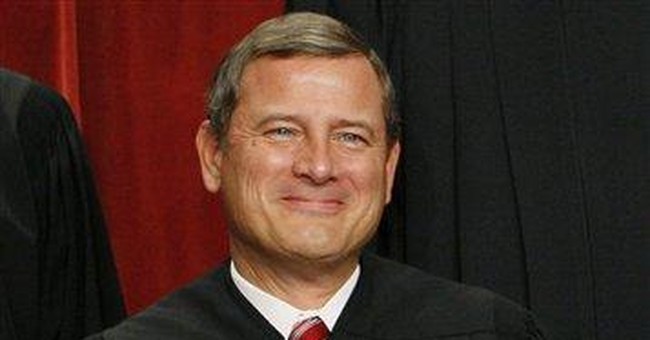 When the young John Roberts was confirmed as Chief Justice of the United States in 2005, he declined to put those gold stripes on his robes. They’re the ones that the late William Rehnquist had devised to indicate his status as first among equals on the nation’s high court. “I’ll have to earn them,” Roberts said modestly. He just did. He gave a powerful rejoinder this week to President Obama’s unprecedented foray into demagoguery.

It’s more than a tempest in a teapot. Last January, President Obama took the unheard of step of criticizing a U.S. Supreme Court ruling during his State of the Union Address. With most of the black-robed Justices seated in front of him, Mr. Obama went out of his way to knock the Court’s 5-4 ruling in the case of Citizens United v. Federal Elections Commission. The high court ruled, narrowly, that major parts of the McCain-Feingold campaign finance law are unconstitutional. Mr. Obama stated, and liberal media outlets echoed his charge, that this would allow corporations and unions to give directly to campaigns.

The high court majority essentially found that you don’t lose your First Amendment rights because you are a business, or a union. You can still praise or criticize a candidate for public office. The McCain-Feingold Act was one of the worst infringements of free speech since the infamous Alien and Sedition Acts of 1798. In very practical terms, that law gave the New York Times, CBS News, and the increasingly rabid MSNBC free rein, while putting a muzzle on non-profits like Family Research Council, National Right to Life Committee, and the Sierra Club.

In criticizing the Court’s ruling, the President got it wrong. He mischaracterized what the Court had done. That’s why—in one of the most memorable gestures in the history of the Supreme Court and of State of the Union Addresses—Justice Samuel Alito silently mouthed the words: SIMPLY NOT TRUE. Alito’s silent protest resounded throughout the nation. The Court did not say that corporations and unions may now give directly to candidates. It did not say that it’s okay for candidates to accept donations from foreign corporations. These activities are still against the law.

But, he went on, “[the] image of having the members of one branch of government standing up, literally surrounding the Supreme Court, cheering and hollering while the court—according to the requirements of protocol—has to sit their expressionless, I think is very troubling.”

It is troubling indeed. The members of the Supreme Court are not potted plants. They are not supposed to sit there like wax figures while Barack Obama waxes indignant about their rulings.

Most of us can think of Supreme Court rulings that are outrageous. Dred Scott v. Sandford helped to drive this country into civil war. I would include Roe v. Wade and Planned Parenthood v. Casy in that list. The Kelo ruling that allows local governments to condemn your home and give it to private developers is another gross injustice. Liberals surely cannot abide Bush v. Gore, the Court’s 2000 ruling that ended Florida’s endless election recount.

In criticizing the Supreme Court, however, we need to respect the rule of law and think about the time and the place. President Lincoln, in his First Inaugural, disputed the idea that the Supreme Court had the final word on all political issues, but he took care to refer to the Court as “that eminent tribunal.” President Reagan used his State of the Union Addresses to call for constitutional amendments to restore the right to life of the unborn, but he did not directly criticize the Court. FDR, following his landslide re-election in 1936, famously tried to “pack the Court” with six new members. Congress—even a Congress with overwhelming Democratic majorities—defeated him on that one.

I thank and commend Chief Justice Roberts for his brave statements. He represents an equal coordinate branch of our government. I hope that next year, the Chief Justice will join Justices Scalia and Thomas in staying away from the increasingly partisan, increasingly raucous display. Instead of watching the State of the Union Address from a front row seat, the Justices might watch American Idol, instead. Let Mr. Obama’s backers sit in those reserved seats and cheer their own American idol all they want.