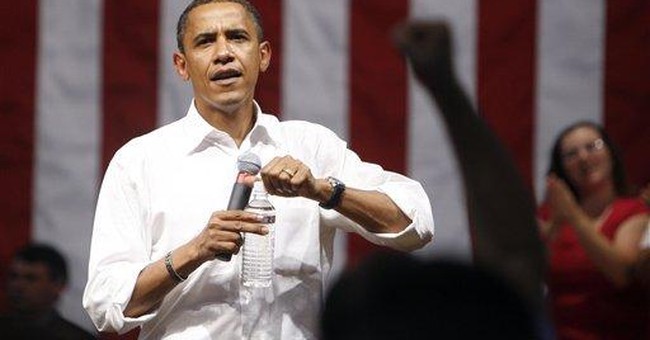 On Monday, Senator Obama uttered one sentence that could haunt him until Election Day. He said of Senator McCain and Governor Palin telling voters they would bring change, “they must think you’re stupid.” Given his stances on the surge, social issues, and his past, Mr. Obama will regret those words.

When a 1996 questionnaire surfaced that had asked if Mr. Obama supported banning all handguns, his one-word written answer was “yes.” He said an unnamed staffer must have filled it out without his knowledge. Then another copy surfaced — this one with his handwriting on it. He says he must not have read that particular question. Sure.

On the hot-button issue of abortion, last month saw a growing concern over Mr. Obama’s opposition to the Born-Alive Infants Protection Act, which states if an abortion is botched and a live birth results, the baby is entitled to medical care. The federal version of this law unanimously passed the U.S. Senate.

And there are Mr. Obama’s associations. Let’s start with the infamous Reverend Jeremiah Wright. Mr. Obama expressed shock that Rev. Wright would say things like “God damn America” and say the American government created AIDS to commit genocide against black people. Yet he belonged to that church for 20 years. He was married by Rev. Wright, had his children baptized by him, and even took his book title from one of the good reverend’s sermons.

Bill Ayers is another stunner. Mr. Ayers bombed a police station and the Pentagon, and recently said he wished he had done more. He is an unrepentant terrorist, but is popular among the ultra-left in Chicago. When Mr. Obama was asked about Mr. Ayers, he implied that he barely knew him.

But once again facts have surfaced. We now know that Mr. Ayers hosted a fundraiser for Mr. Obama. They served for years together on a board with only a few people, and they worked closely on financial matters during those years. Does that sound like someone he barely knows?

And then we have the Iraq war. Congress authorized war against Iraq in 2002. The vote in the Democrat-controlled U.S. Senate was an overwhelming bipartisan majority of 77-23. The intelligence provided to Congress was profoundly flawed, but based on the intelligence presented, Congress voted for war. That is why those voting for the war included John Kerry, John Edwards, Hillary Clinton,and — yes — Joe Biden.

And finally we have the surge. Mr. Obama opposed it, saying it was doomed to fail. Yet the troop surge has succeeded brilliantly, and all but the most dedicated diehards admit it. Now Mr. Obama acknowledges that it succeeded, but does not admit his predictions of failure were wrong. How were they not wrong?

These actions have made a pattern. Mr. Obama has changed his position on numerous occasions, cannot explain why he has done so, and yet his campaign expects us to believe that he never changed his mind on any of those issues.

He must think we’re stupid.

'End of the Era'? What Is CNN's Don Lemon Going to Do Now?
Townhall
Randi Weingarten welcomes 'new infusion of federal education money' as key to fully reopening schools
Twitchy
Report: Biden Snapping and Losing It in Profanity-Laced Tirades at Staff
Redstate
Legacy Media Finally Calls Out the 'Experts' for Their COVID-19 Misrepresentations
PJ Media