No Time Outs in the War on Terror 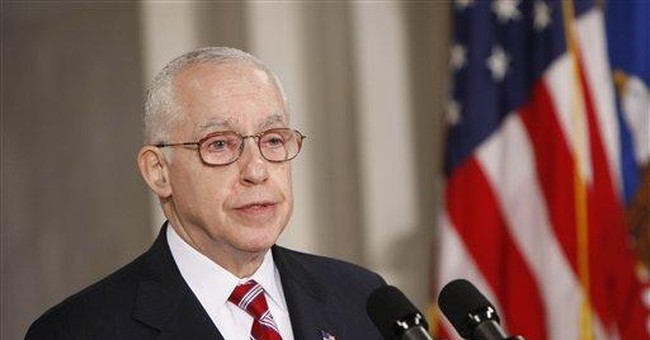 “We must not turn the Bill of Rights into a suicide pact.”
— U.S. Supreme Court Justice Robert H. Jackson

In his State of the Union address next week, it is imperative that President Bush push for the reauthorization of the Foreign Intelligence Surveillance Act of 1978. Setting aside foolish partisan politics and ad hominem arguments, FISA is necessary for the national security of America and the safety of Americans.

FISA is the law that governs gathering foreign intelligence information. Last year, when the CIA and intelligence community announced there were gaping holes in our ability to track overseas terrorists, Congress acceded to the president’s call for immediate action to fix and update the law.

Over 90% of global Internet traffic, and countless phone calls from one foreign country, say, Iran, to another foreign country, say, Afghanistan, pass through America. The question becomes whether our government can monitor such calls that involve suspected terrorists without first filling out the paperwork for a warrant. The fix did that.

But Congress only gave the fix a shelf life of several months, so it would have more time to debate the issue and revisit it later. That statutory fix is about to expire, and Congress must do something about it. The president should call for FISA reauthorization in his State of the Union, and demand that Congress swiftly comply with it.

The bill accounts for new technologies such as cell phones and the Internet that were not around in 1978. Technology changes rapidly, and this law permits our Intelligence Community to respond rapidly when our agents are trying to track movements and communications of suspected terrorists.

The fundamental divide here is war versus law enforcement. Some refuse to acknowledge there is a divide, while others understand that they are two different government functions.

Some look at the idea of a war against a global network of terrorists as merely law enforcement. This view consists of catching the “bad guys” after they do something bad, giving them a court trial with due process, and an American lawyer paid with taxpayer dollars, and American prison care when convicted. Others understand that a war is a conflict between two powers with different beliefs and ideologies, and that lives are lost — and sometimes nations are destroyed — by not devoting the necessary resources to defeating a wartime enemy.

This distinction is critical because law enforcement is unavoidably backward-looking. Courts are designed to punish people only after they do something wrong. Wartime national security is about preventing terrible things — like devastating attacks that kill thousands of people — from happening in the first place.

We are at war. Destroying two skyscrapers and part of our military headquarters are not just criminal acts. Killing 2,973 people in a planned attack is not just a criminal act. These are acts of war perpetrated by foreign enemy combatants. While law enforcement is to maintain harmony within our culture, war is to protect our culture from being eradicated.

Those who favor the government having this power believe that America is something special, and that our Bill of Rights is designed to protect Americans’ rights in a special way. Thus, those who seek to destroy our form of government through military action must be deterred with military action.

Americans must treat all human beings with respect. Our traditions and our laws recognize the dignity of the human person and the universality of basic human rights. But as a general matter, our civil and political rights apply differently in a foreign context. And some of those rights are conferred as a matter of policy and of statute, not because of a command of the Constitution. However, the separation of powers is in the Constitution for a reason, and all necessary safeguards must be in place to protect the Constitutional rights of American citizens.

Government power over us is limited because “We the People” are sovereign over our government. But that is not true for every person on the planet. The Constitution is written by “We the People of the United States,” not the people of the whole world.

Therefore the Constitution secures various rights to our citizens as a check over our own government so that we can live free and safe in America. Some of those rights are applied differently to foreigners overseas.

The foremost job of the president of America is to protect Americans. His most important responsibility is as commander-in-chief, vested with executive authority to use our military and other resources to defend the American homeland, protect our national security interests, and safeguard the lives of all Americans.

Justice Jackson once famously said years ago that the Bill of Rights is not a suicide pact. Denying our government the wartime power needed to track our terrorist enemies because of the Fourth Amendment would make it just that. America deserves better.