Katie Yoder
|
Posted: Dec 25, 2019 12:01 AM
Share   Tweet
The opinions expressed by columnists are their own and do not necessarily represent the views of Townhall.com. 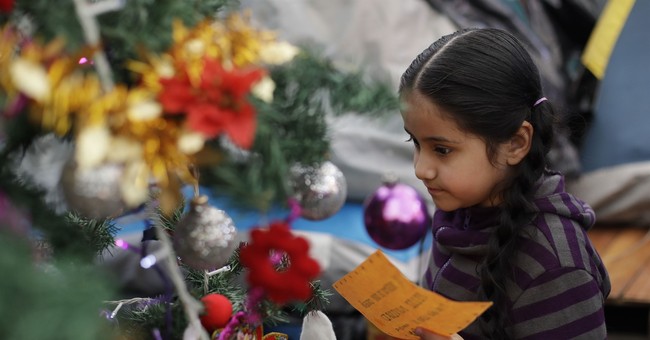 In anticipation of the upcoming election year, negative stories abound in the media. But, this Christmas season, outlets are also sharing stories of hope and good news – from holiday cards encouraging the elderly that their lives are worth living to a Santa Claus who signs “Merry Christmas” for children who can’t hear.

They exist – and they’re well worth paying attention to. Here are five heartwarming stories to share this Christmas that exemplify the goodness of humanity:

An elderly grandmother in the U.K. suffers from dementia and physical disabilities – but that doesn’t stop her from influencing passersby.

According to a tweet from her granddaughter, Melly, she “sits in her chair by the window all day, every day - just looking outside & normally feeling lonely.” She does something else too: she makes a point of sharing a smile with people who walk past.

One of those people, named “Leigh,” sent the grandmother a thank-you note and store voucher this Christmas, the Evening Standard reported on December 23.

“To the lady who waves and smiles, with Christmas wishes,” the letter read. “It’s nice to see you smile and wave when I walk past your house. Please accept my small token gift to give you another reason to smile.”

"Two days ago she said she wished she was dead,” Melly said of her grandmother, “and today she’s so happy and keeps asking us to read the message out loud.”

2. Santa’s ‘Elves’ Respond to Children’s Letters from around the World

When children send letters to Santa, there’s a good chance they’ll land in Santa Claus, Indiana, reported the Indianapolis Star on December 17. Every year, a group of “volunteer” elves there respond to tens of thousands of letters.

“We never refer to what they want, bringing a gift — we can't do that," Pat Koch, Santa Claus Museum & Village founder and "Chief Elf," told the outlet. "But we always try to lift them up.”

Another child wrote, "All I want for Christmas is for my mommy and my daddy to be happy."

These are the letters that “elves” like Ann Wahl, a retired schoolteacher, responds to.

"It’s amazing that the children see other children and they’re hurt for their friends," Wahl said. "Kids are good. They're innately good.”

"We’re all kiddos at heart when it comes to the Christmas spirit," she added. "And that’s one thing I think that we all share, no matter what’s going on in the world."

When 24-year-old oncology nurse Alex Collazo discovered one of her patients was struggling with chemotherapy, she presented him with a guitar, the Tennessean reported on December 17.

That’s because her patient, 67-year-old Penn Pennington, is a long-time musician in Nashville, having performed at country bars for 30 years and even at the Grand Ole Opry. Most recently, his daughter, Brandi Leath, captured him on camera singing Christmas duets with Collazo at the Tristar Centennial's Sarah Cannon Cancer Center.

"He's going through something so rough and so terrifying,” Collazo said, “and this was something I could do for just a moment in time to help him forget he was in the hospital and what was going on."

It was a gesture that meant the world to Pennington.

"Any time you go in the hospital for cancer, it's automatically a downer. This was an escape, for a while. It was a good thing," he said.

4. NICU Staff Dress Up Babies in Holiday Garb for Cheer

In Atlanta, one NICU center decided to spread the Christmas spirit by dressing up their little patients in holiday garb.

The photos show preemies dressed up as Santa, elves, and even stocking stuffers.

One parent wrote in response, "Thank you guys for taking care of my Níla she's doing great!!!! I can't wait to take her home!!!!”

One Santa Claus in Kentucky decided that, this year, the Christmas message should be shared with all children – even those who can’t hear it.

"Hello! I am so excited to see you," Jarod Mills verbally says and physically signs in a video, while dressed up as Santa Claus. “I have heard that you have been amazing this year.”

“I will see you Christmas,” he concludes. “Merry Christmas!”

Mills is the father of a child who is deaf, a local CBS affiliate reported.

“I wanted to make a video for any deaf/HOH (hard of hearing) kids who may not have been able to make it to a Santa who can sign. Enjoy!” Mills wrote in his post. He later added, “I just want to make sure Santa is accessible to everyone!”