Katie Yoder
|
Posted: Dec 02, 2019 12:01 AM
Share   Tweet
The opinions expressed by columnists are their own and do not necessarily represent the views of Townhall.com. 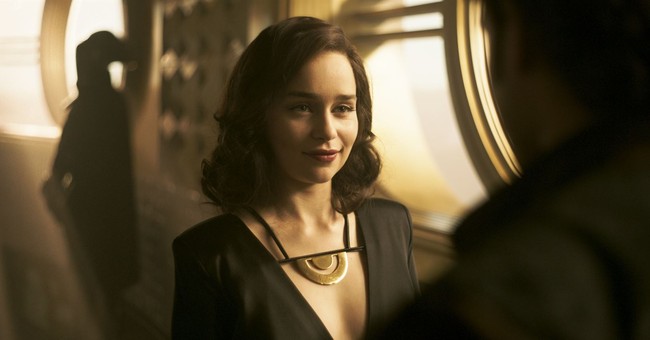 Actress Emilia Clarke, who rose to fame after starring in HBO’s Game of Thrones, recently revealed that she was pressured to film scenes naked for the show. She’s not alone – actresses from Evangeline Lilly to Jennifer Lawrence have admitted to either crying or drinking in response to filming scenes with little to no clothing.

Speaking on Dax Shepard's Armchair Expert podcast, the 33-year-old expressed her disbelief when she first landed the role of Daenerys Targaryen in Game of Thrones, which premiered in 2011.

“Obviously, I took the job,” she said in the podcast released late November. “They sent me the scripts and I was reading them and I was, it was like, ‘Oh, there’s the catch.’”

But finding out about the show’s nudity didn’t stop her.

Right out of drama school, she decided to “approach this as a job” and believed that “if it’s in this script, then it’s clearly needed.” But when she actually began filming the first season, which had a “f–- ton of nudity,” she felt a bit differently.

She would dismiss her feelings, have a cry in the bathroom, and then return to filming. That’s when a co-star, Jason Momoa, stepped in. Momoa plays Khal Drogo, who rapes Daenerys after she’s sold into marriage with him. Later in the show, she develops feelings for him.

“The scenes, when I got to do them with Jason, were wonderful because he was like, ‘No, sweetie, this isn’t okay,’ and I’m like, ‘Oh,’” Clarke said.

She acknowledged that filming nude “is terrifying” and that, during rape scenes, Momoa was even “crying more than I was.”

A more experienced actor, Momoa knew more about what should and shouldn’t happen on set, she said.

Today, she says, she’s a “lot more savvy about what I’m comfortable with.”

Later on in the show, when she filmed nude for the last time, she said she agreed: “This is mine, they’ve asked me to do it, and you know what, I’m f--king game.”

But even then, she said, “it brings into question, the thing of like, what it is like being under the gaze of people you’ll never meet.”

Sadly, Clarke joins a long list of actresses who have felt similarly. In 2018, actress Evangeline Lilly likewise revealed during a podcast that she was pressured to film nude during Lost.

“I’d had a bad experience on set with being basically cornered into doing a scene partially naked, and I felt I had no choice in the matter,” she recalled. “And I was mortified and I was trembling. When it finished, I was crying my eyes out.”

She added, during a UK interview that same year, that she drank to survive the role in general.

“Good god it was terrifying!” she exclaimed. “It really f***ed me up. Am I allowed to say that? I drank a lot to get through it. I didn’t sleep a lot. All alone, in a totally different culture, in a different country.”

According to a 2016 Maxim piece, other celebrities have admitted to drinking while filming sex scenes, including Jennifer Lawrence, Lizzy Caplan, and Keira Knightley.

Others respond in different ways. While filming a scene in Easy A, Emma Stone said she experienced an asthma attack while Reese Witherspoon, in Wild, had a panic attack.

In 2017, Salma Hayek wrote in the New York Times about being forced into a sex scene with another actress – by the infamous Harvey Weinstein.

Going as far back as 2000, one New York Times Magazine piece explored “The Pressure To Take It Off” and reported on actresses discussing their mixed feelings on nudity.

Actress Rosie Perez remembered her first time getting naked on camera came while filming Do the Right Thing.

“It wasn't really about taking off my clothes. But I also didn't feel good about it because the atmosphere wasn't correct,” she said. “And when Spike Lee puts ice cubes on my nipples, the reason you don't see my head is because I'm crying.”

Every actress, in the end, makes choices regarding what she will or will not film. At the same time, Americans should remain aware of how young women can be pressured or manipulated by Hollywood – and support films that value actresses not as mere sexual objects but as human persons.