Katie Yoder
|
Posted: Aug 30, 2019 8:19 AM
Share   Tweet
The opinions expressed by columnists are their own and do not necessarily represent the views of Townhall.com. 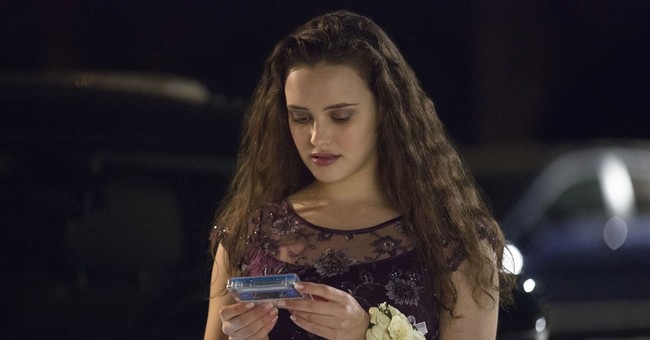 The media are praising the new abortion plot in "13 Reasons Why" as “realistic.” But it’s the definition of unrealistic: not only does the show demonize the pro-life movement as a whole, but it also reduces abortion to the mere removal of “uterine content.”

It shows one side – and it’s not the pro-life one.

Netflix released the third season of its high-school drama on August 23, after facing condemnation from health-care professionals and groups like The Parents Television Council and the American Family Association for the suicide show’s influence on teen viewers. Now, it seems, the streaming service wants to influence teens on the topic of abortion as well.

The second episode, “If You’re Breathing, You’re a Liar,” follows one of the main characters, Chloe, as she seeks out an abortion. The plot decision was met with applause by many in the media. Bustle praised the show for a “realistic look at a woman’s right to choose.” Refinery29 called the scene “heartbreaking,” while Seventeen deemed it “intense.”

They had a hunch it was in the works. Last year, the actress who plays Chloe, Anne Winters, and the actor who plays her boyfriend, Justin Prentice, predicted an abortion in the new season. And Netflix, which has worked with groups like Planned Parenthood, isn’t new to producing abortion scenes.

Once the popular cheerleader, Chloe reveals to some of her classmates that she’s pregnant. The father of her baby is Bryce (Justin Prentice), a jock and a rapist who has sexually assaulted both her and other young women.

Chloe reasons at one point, “I really felt like I loved him.” But instead of telling Bryce that she’s pregnant, she confides in her friend Zach (Ross Butler).

She soon realizes that she is actually at a pregnancy center posing as an abortion clinic, after a “counselor” uses words like “mother” and “baby.” The show frames the woman as manipulative while she tells Chloe that the “ultrasound looks good” and makes a point of showing the sonogram.

But that’s only the beginning of the episode’s attempt to paint the pro-life movement as deceptive.

When Chloe brings Zach with her to an actual abortion clinic, they encounter a sidewalk counselor posing as an abortion-clinic escort. As Chloe begins to walk from the car to the clinic, other sidewalk counselors start shouting at her while the “escort” takes Chloe by the arm to “walk [her] past the crazies.”

But as they near the door, the “escort” reveals she’s one of the “crazies.”

“Killing is a sin,” she pressures Chloe. “But it’s not too late. This is the moment where you decide the fate of two souls. Choose wisely, or you’ll regret this day until you die.”

Before she departs, she shocks Chloe by handing her a model of a fetus with red blood drawn on it.

In response to the scenes, Sidewalk Advocates for Life, which trains thousands of volunteers to offer women alternatives to abortion at clinics, criticized the episode as “abortion propaganda.” It condemned the “counselor” who “uses not-so-subtle psychological tactics to foment anxiety” and the activist employing a “deceitful, last-ditch effort to intimidate women using guilt and gore.”

“These situations and characters are propagandistic caricatures that in no way represent what takes place on the sidewalk as American women in need of support meet Sidewalk Advocates and prayer volunteers before they make a final decision – or inside the many pregnancy resource centers we are proud to refer to,” its August 28 press release read.

This isn’t new: many in the media regularly attempt to demonize pregnancy centers, which provide pregnant women and new moms with free housing, medical supplies, clothing, and educational classes, among other support.

Netflix later showed Chloe having her abortion while eight weeks pregnant. Before she goes through with it, the clinician describes how a “suction device will dislodge and remove the uterine content.”

During the abortion scene itself, the camera focuses on Chloe, as she bites her lip, breathes heavily, and grasps her hands. The clinicians encourage her before the abortionist turns on the “uterine content” vacuum.

The viewers don’t see what the abortionist sees as she performs the abortion. They don’t catch a glimpse of the “content” sucked out.

Scenes like this aren’t surprising coming from Netflix. Not only did it recently promise to “rethink” its investment in Georgia after the state passed new abortion restrictions, but Netflix has also worked with Planned Parenthood to create abortion scenes, such as in "Big Mouth."

Additionally, Planned Parenthood has served as an advisor to Netflix show creators for abortion scenes, like the one in "GLOW" in 2017. Other Netflix shows have addressed abortion, too, from "Sex Education" in 2019 to "BoJack Horseman" in 2016.

Some Netflix productions have claimed to be neutral on abortion, while proving otherwise. Last September, the streaming platform released "Reversing Roe," a documentary about Roe v. Wade, the 1973 Supreme Court case that legalized abortion nationwide. While Netflix praised the film for “interviews with key figures from both sides,” only one pro-life woman made an appearance –  alongside 13 women who supported abortion. Several pro-life women later confirmed they had been interviewed for the project, but didn’t make the cut.

Netflix also boasts a financial relationship with Planned Parenthood, the nation’s largest abortion provider. Outside spending data compiled by the Center for Responsive Politics ranks Netflix, Inc. as 34th in top donors to Planned Parenthood in 2018. Individuals affiliated with Netflix gave $19,500 that year, and the organization itself gave $10,000.