Katie Yoder
|
Posted: Aug 27, 2019 12:01 AM
Share   Tweet
The opinions expressed by columnists are their own and do not necessarily represent the views of Townhall.com. 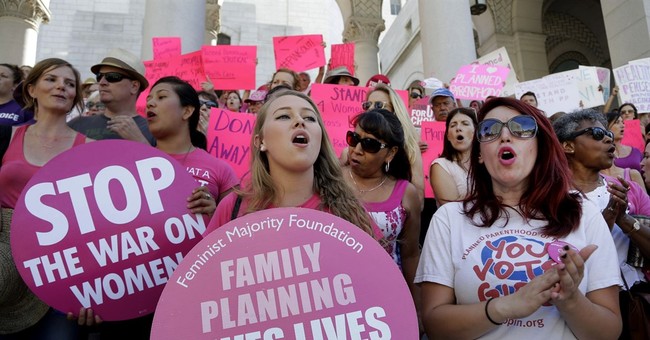 Planned Parenthood is harnessing star power in a new effort to advertise abortion. But with its straw-man messaging, Planned Parenthood and its celebrity PR team are only preaching to their choir. They’re not converting anyone.

On August 26, Planned Parenthood announced that it had collected the signatures of nearly 140 musicians as part of its latest campaign for abortion called “Bans Off My Body.” To boast about its supporters, the nation’s largest abortion provider purchased an ad listing the artists – from Lady Gaga to Ariana Grande – in Billboard magazine.

As Planned Parenthood’s current, acting president, Alexis McGill Johnson told Billboard in August that, in particular, "Artists can highlight how out-of-touch some of our politicians are in this space.”

Or, perhaps, they can highlight how out of touch both they and Planned Parenthood are with the rest of America. Poll after poll reveals that the majority of Americans want abortion restrictions, including, more recently, a June NPR/PBS NewsHour/Marist poll.

That’s because, as the pro-life movement stresses, every pregnancy involves two bodies: a mother and her unborn baby. In other words, abortion restrictions don’t place bans on bodies. They save them.

“Bans Off My Body” uses dozens of celebrities – 136 musicians, to be exact – to promote abortion. And many of them, like Miley Cyrus, have backed Planned Parenthood before.

Not only did the musicians sign a petition against abortion restrictions, but also some will invite Planned Parenthood to “call fans to action at music festivals like Jay-Z's Made in America in Philadelphia and Music Midtown in Atlanta,” Billboard reported. “The nonprofit will also have a presence on a number of artists' national tours this year.”

With its celebrity endorsements, Planned Parenthood hopes to attract half a million signatures for its petition by Jan. 22, 2020 – a date that marks the anniversary of Roe v. Wade, the 1973 Supreme Court decision that legalized abortion in the United States.

“Musicians across the country are standing in solidarity,” Planned Parenthood declared on its webpage. “They’re saying access to sexual and reproductive health care is about the same type of freedom that allows them to create music and speak their truth — because no one is free unless they control their own body.”

And an unborn baby’s body, it would seem.

Some of them, like Dua Lipa, took to social media to urge their followers to join them in signing Planned Parenthood’s petition.

“25 MILLION. That’s how many women live in a state where abortion could be outlawed if Roe is overturned,” the artist tweeted August 24. “Join me & Planned Parenthood and tell politicians: get your #BansOffMyBody.”

That same day, Tove Lo tweeted, “Our bodies are our own. If they are not, we can not be truly free. Or equal.”

And, in a statement released by Planned Parenthood, Eilish similarly added that "Every person deserves the right to control their body, their life, and their future."

Pro-lifers would agree. Except for that, they would urge, a person’s body, life, and future begin in the womb.

The remaining stars in support of Planned Parenthood are:

The Bird and The Bee

Queens of the Stone Age

Walk Off the Earth