Katie Yoder
|
Posted: Feb 19, 2019 7:12 AM
Share   Tweet
The opinions expressed by columnists are their own and do not necessarily represent the views of Townhall.com. 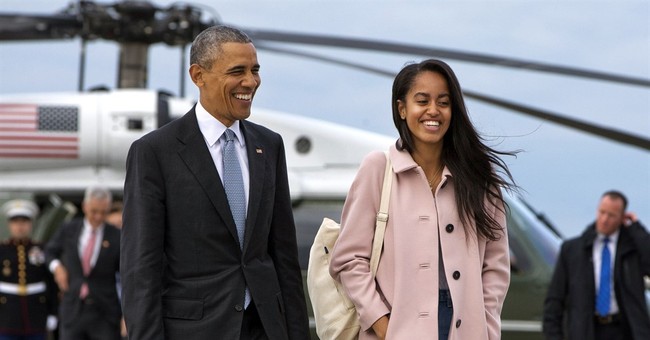 Stalking or attacking the children of politicians isn’t about being right or left – it’s about right and wrong. That’s why, when the Daily Mail published an “exposé” of sorts on Malia Obama, conservatives were some of the first to come to her defense, from Ben Shapiro to Matt Walsh.

On February 18, the Daily Mail zeroed in on the oldest daughter of former President Barack Obama. For its latest story, reporter Jennifer Smith focused on a secret Facebook account appearing to belong to Malia during high school and her gap year that contained photos of Post-it notes with handwritten anti-Trump messages.

The story came a day after the same outlet published yet another piece about Malia, accusing the 20-year-old Harvard student of sipping rosé with friends in Miami.

Whether it’s Barron Trump or Malia Obama, children of the presidents should be off limits as they grow up and enter into adulthood. It’s not a political rule; It’s human decency. And so, liberal media figures and commentators rushed to condemn who they saw as the culprit: conservatives.

“Conservatives are frothing at the mouth over Malia Obama drinking rosé at a party just shy of her 21st birthday,” Imani Gandy, the senior legal analyst for Rewire.News, tweeted on Feb. 18. “These are the same people who had no problem giving Justice Brett Kegstand a lifetime appointment to SCOTUS.”

That same day, a comedian and writer employed by entertainment like Saturday Night Live and Netflix, Zack Bornstein, argued similarly. “The same people mad at Malia Obama for drinking wine and wearing a bathing suit at age 20 are the same people who excuse Brett Kavanaugh for drinking beer and assaulting a woman at age 17,” he said.

Writer and comedian Sarah Cooper typed on Feb. 18 that “Rightwingers are obsessed with Malia Obama today” and concluded “It's almost as if they wish Barack Obama was still president as much as I do.”

Adam Best, a filmmaker and co-founder of “The Left” podcast, added Feb. 18 that, “Trolling Malia Obama for having fun with her friends and sipping some rosé is even dumber than arugula-gate. Conservatives never get sick of embarrassing themselves trying to smear this family.”

None of them cited any conservatives as evidence. That might be because, in reality, conservatives were some of the first to race to Malia Obama’s defense on Monday.

Daily Wire writer Matt Walsh tweeted, “Everyone on my Twitter feed seems to agree that this Malia Obama thing is not news and doesn't matter and we should just leave her alone. Seems like this another fake ‘conservatives are outraged about a dumb thing’ story that the media has cooked up.”

Conservative comedian Tim Young chimed in, “Malia Obama isn't responsible for her father's policies... and she definitely wasn't elected to the White House...  Sorry, not giving that article the clicks and you shouldn't either.  All first kids (who aren't members of white house staff) should be off limits.”

Robby Starbuck, a producer and director, wrote he wouldn’t “spread the garbage being run” about Malia. “She is a 20 year old young adult who’s figuring out who she is, making 20 year old mistakes. We all did at her age. I think it’s dumb to criticize kids of politicians who obviously support their parents. This is not news,” he said.

He ended with a message about the “leftists blaming the Malia Obama trend on Conservatives”:  “You’re hard pressed to find one who cares but you’ll find a ton defending her right to be a young adult, living a young adult life.”

Christian conservative writer Carmine Sabia continued, “Attacking Malia Obama for drinking at 20 and for having a Facebook page where she does not like the man who took over for her dad and is undoing everything he did is not journalism. It is stalking and shameful. As a conservative and President Donald Trump supporter I disapprove.”

Writer and digital media manager for the R Street Institute, Shoshana Weissmann, also chimed in. “Imagine being the douche who leaks Malia's info to reporters to feel powerful. That person's definitely on the path to having a fulfilling life,” she wrote with irony. “There's def a type in politics who likes to feel like they are insider-y and will do stuff like this to boost their sense of importance when really nobody cares.”

In other words, conservatives didn’t care about what Malia did – but they did care about how the Daily Mail treated her. And so, instead of placing blame where it doesn’t belong, liberals should join conservative voices in support of journalistic ethics.