Katie Kieffer
|
Posted: May 09, 2016 12:01 AM
Share   Tweet
The opinions expressed by columnists are their own and do not necessarily represent the views of Townhall.com. 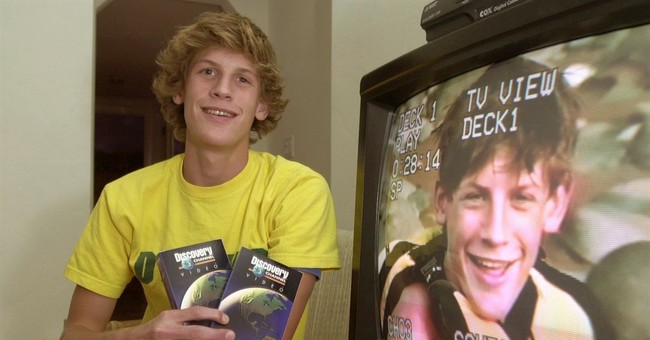 Navy SEAL Charlie Keating IV was a real-life Batman—a self-made superhero. On behalf of our troops and veterans, it is important to properly honor this 31-year-old Millennial—who gave the ultimate sacrifice at the hands of ISIL thugs in Iraq last Tuesday—but was painted as the progeny of a pilferer.

The Bronze Star Medal with Combat “V” recipient courageously took on some 125 ISIS fighters and 20 assault vehicles to rescue a handful of U.S. military advisors. All of the advisors escaped—but their rescuer, Keating IV, was fatally hit. For this sacrifice, outlets like CNN honored Keating IV by telling the world he was the grandson of a man who “served time for fraud, racketeering and conspiracy.”

“U.S. Navy SEAL Dies at Hands of ISIL ID’d as Grandson of S&L Financier Charles Keating” declared the front page of USA Today. The newspaper devoted the same amount of space (four paragraphs) to the late SEAL as to his grandfather’s involvement in the 1980s savings-and-loan crisis.

NBC and many others were also quick to turn a heroic tragedy into blood money. In truth, Keating IV was a celebrated athlete who was so moved by the 9/11 attacks that he gave up a promising track career to enlist.

What’s new? You might ask. Hasn’t the media always favored self-serving dynasties over selfless troops? Yep. What’s new is that—since 2011—the media has taken unprecedented steps to bash our special operations forces, particularly the elite Navy SEALS. More concerning, the media has recklessly revealed secrets about where and how the SEALS operate.

“I feel it’s despicable how everything I read in the media keeps including his grandfather,” former Navy SEAL Nick Kraushaar told me. Instead, Kraushaar said, we should be “honoring [Keating IV] and his sacrifice!”

The media takes cues from political leadership. And, since 2011, the Obama administration has signaled to the media that it is acceptable to endanger, misrepresent, or denigrate the SEALS.

It behooves you and me to demand that our special operations forces receive more respect—and anonymity—for their sakes and that of our national security. As Kraushaar puts it, “Many guys are beside themselves that Iraq is going into the hands of ISIS. We lost a lot of friends over there. …Long story short, we do it [become SEALS] because we want to help out. There’s almost 300 days of training per year. About 80 hours a week with your hands on your equipment—be it a radio or a gun. We want to be the protector. People don’t understand. Some call us robot killers. Most SEALS that I hang out with are very humble. And, we don’t operate very well in the light of day.”

SEALs may be the fittest; most adventurous; and most competitive guys in America. But they’re not braggers or drones. They are highly intelligent men who willingly give up life’s comforts to take on the world’s most dangerous criminals.

Five years ago this month—on May 1, 2011—SEAL Team 6 took out Osama bin Laden. Two days later, the White House (via Vice President Joe Biden) named the SEALs as responsible for killing bin Laden. This was not an off-the-cuff, jolly jerk remark. It was a prepared speech. That night, then-Secretary of Defense Leon Panetta jumped for a slice of the attention, telling PBS it was “the SEALS.” What a bunch of schoolgirls.

The SEAL Team 6 member who actually shot bin Laden in the forehead and killed him told Esquire that this announcement led the media to invade the neighborhood where TEAM 6 members live and publicize their addresses and favorite local restaurants and bars to the world. Their backs—and those of their families—were marked with an X.

Who knows why Obama’s administration named SEAL Team 6, other than that Obama was up for reelection and needed an exciting story to distract Americans from the anemic economy.

The more dramatic and dangerous the feat sounded, the better. After all, Obama’s own contribution was making the “tough call” from the comfort of the Situation Room to utilize SEAL Team 6—an elite unit of an already elite military force. It’s nearly impossible to become a SEAL and the fact that Team 6 members, superhumans among superhumans, were used for this mission made it sound much riskier, impressive, and, frankly, more cool.

Al-Qaeda only took three months to retaliate against the SEALs by downing their Chinook helicopter—killing 30 Americans assigned to the SEALs, including 22 SEALS. And ever since 2011, the media has been on a mission to profit from SEAL stories—regardless of the consequences for our country.

Slandering SEALS means cash money, baby! Journalists with zero comprehension of the war cast judgment on our special operations forces as if they are no more human than animated shooters in the video game Call of Duty.

In truth, SEALS are humans who—like Batman—train themselves to be superhuman. SEALs will repeatedly embark on three-week and two-week missions that take them away from their families.

“Operating radios and all the GPS equipment. Operating in the middle of the night. It takes a lot of repetition to be efficient and to be elite. You can’t do it part-time,” Kraushaar says.

SEALs share a deep loyalty to their SEAL brothers. “It’s like being part of a biker club,” explains Kraushaar. “We are not going to roll over on each other. We are not going to talk behind each other’s back. We are all going to come back. You have to make sure you always have good shots.”

Kraushaar adds that in SEAL training, “they apply as much stress as they can. You either say, ‘I can’ or ‘I can’t deal with this.’ SEALs don’t quit.”

Charlie Keating IV never quit. Those he went to save came out alive. We must be as loyal to him as he was to us. We must remember his life—and the life-saving skills he toiled to master—with prayer; with gratitude; and with a dedication to be all we can be.