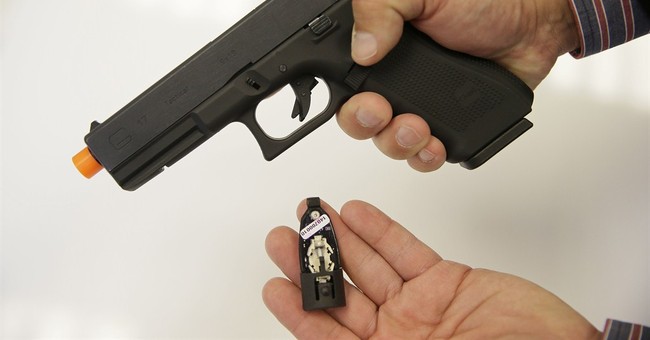 Fear of sunlight and guns is leading Democrats to turn nocturnal.

Social by nature, it is abnormal for humans to skulk in the shadows. Rational by nature, it is also unhealthy for men and women to metaphorically work in the dark by deceiving each other because fraud is counterproductive to efficient trade and commerce.

Today, I’ll let you in on a clandestine but fast-moving effort on the part of Democrats to implement universal background checks under the cover of darkness. The danger of losing your 2nd Amendment rights has never been more palpable.

On November 4, Washington State passed expanded background checks through a ballot initiative that garnered 60% of the vote. As USA Today puts it: “Largely overshadowed by the GOP’s capture of the Senate, the Washington vote is being touted by gun control advocates as a potential template for establishing universal background checks as a condition of all gun sales throughout the country.”

While jubilant Republicans and independents celebrated midterm election results, Democrats quietly celebrated their own victory in controlling gun-owners. Gun grabbers tiptoed through the twilight while journalists covered hard stories like Chelsea Clinton’s new baby. (Because, in Katie Couric’s world, an heiress with world-famous anti-gun parents and mother of one like Chelsea Clinton is a far better role model for women than a self-made mother of five like Sarah Palin who believes every woman has a natural right to self defense.)

Universal background checks failed by a vote of 54-46 in the Senate last spring. Americans were too smart to let Congress pass a federal background check measure (take that, Jonathan Gruber!). Experts like Dr. John Lott have shown that burdensome checks will not improve public safety. In fact, Dr. Lott has shown that extended background checks can backfire by delaying law-abiding women from obtaining firearms for personal protection against violent stalkers.

A November Gallup poll found that 63% of Americans believe that guns make their homes safer. The majority of Americans are intelligent enough to find great comfort in knowing that their loved ones are within close proximity of a firearm.

As the sun rose on November 5, the Pistol Prying Party celebrated that it had moved one step forward in accomplishing piecemeal what it could not accomplish under the scrutiny of a national spotlight.

Implementing onerous background checks state-by-state is only one example of the upward trend in surreptitious gun grabbing. In late September, California Gov. Jerry Brown quietly signed a measure that encourages law enforcement officers and California residents to turn in strangers, colleagues, friends and even family members who they deem to be a “threat” to society or themselves.

As a little girl, I attended a summer day camp. My friends and I spent several days building a miniaturize neighborhood out of grass and twigs. One afternoon, a jealous camper sauntered over and kicked our stick village to smithereens. Outraged by this injustice, I informed our teenage counselor who snipped: “Don’t be a tattletale.”

Ironically, the same slothful attitude that motivates a teenage camp counselor to tell children to cower in the face of playground bullies is evident in adult politicians like Jerry Brown. Too lazy to do his real job which is to defend (not control) Californians and their private property, Brown encourages Californians to cave to bullies (i.e. sexual predators and thieves) and tattle on law-abiding gun owners.

Gun owners and law-abiding citizens: you must be diligent. Despite big wins for freedom on Election Day, we cannot afford the luxury of resting on our laurels. Share this message with your friends and family so that we can defeat the nocturnal Democrats’ nefarious attacks against our natural right to self-defense.