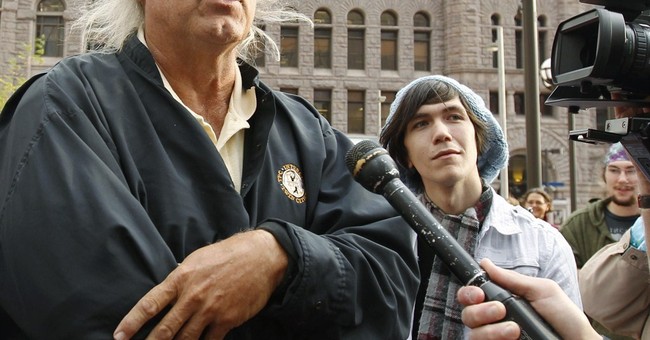 Jesse “The Body”? Who’s that? I’m a Minnesota girl and I only know Jesse the Baby.

In September of 2012, I listened to my home state’s former governor speak at Macalester College in St. Paul, MN. I felt embarrassed for my state. Ventura showed up in jeans, a tie-dyed T-shirt and long, straggly gray hair that looked like it hadn’t been combed or washed in days. No, he wasn’t going for “California casual” with jeans in a blazer. On top of his multi-colored t-shirt he donned, not a classy sport coat, but a 90’s-style color-block windbreaker. He was trying and failing to look young, cool and hipster as he spoke to college students.

Nearly two years later, Ventura has cut and washed his hair and polished his wardrobe. He’s swapped his rummage sale rags for a classy black suit and blue tie. His wardrobe may have changed but Ventura is still embarrassing me. He persists in making Minnesotans look like babies who drool when they draw out their vowels.

Last Friday, Ventura won a lawsuit against the widow of late Navy SEAL Chris Kyle. Jejune Jesse complained that Kyle defamed him and permanently ruined his reputation. The question is whether Ventura had a reputation worth defending to begin with.

Ventura has said: “Organized religion is a sham and a crutch for weak-minded people who need strength in numbers.” On his 50th birthday, Jesse Ventura showed up in with a crown of flowers on his head and a pink hula skirt swishing at his hips. When he was a pro wrestler, he wore a feather boa and apparently never outgrew the accessory. Dan Creed, who once managed the governor’s mansion, attested that Ventura would leave a pink boa strewn across his bed.

In his book, Kyle describes a 2006 fight in a California bar after the death of Navy SEAL Mike Monsoor. Kyle referred to Ventura only as a “celebrity” in his book, “American Sniper: The Autobiography of the Most Lethal Sniper in U.S. Military History.” Yet, during his book tour, Kyle revealed that the “celebrity” who he punched in the bar for saying that the U.S. Navy SEALs “deserved to lose a few” was indeed Ventura.

Oops. Life Lesson #999: Critique a pubescent man and be prepared to hear him bawl. And can Jesse bawl.

Ventura sued Kyle for defamation shortly after the release of “American Sniper.” About a year later, Kyle tragically died when he and his friend Chad Littlefield were shot in broad daylight at a shooting range in Texas. Their murderer was a young Marine veteran named Eddie Ray Routh who Kyle and Littlefield were trying to help cope with post-traumatic stress disorder. After Kyle’s death, Ventura persisted with his lawsuit by suing the executor of Kyle’s estate, his wife Taya Kyle.

Who sues a SEAL’s widow after her husband tragically dies? Moreover, who says “There are no winners in this trial” after winning $1.8 million as Ventura did last Friday?

No one in America was thinking about Ventura until he sued the Kyles. Ventura’s reputation and earning potential were hardly tarnished for perpetuity; Venture had already tarnished his own name for perpetuity. By 2012, the year he sued, Ventura and his wife reported $190,000 in gross income—down from the $3 million they reported in 2003.

Ventura’s career was at a standstill and now he has gained cash and the limelight while Kyle’s wife will never get her husband back. Ever. If Ventura weren’t so greedy perhaps he could see himself as a winner.

Kyle’s wife and children will get the last laugh. Her husband’s book is currently a number one bestseller on Amazon. Meanwhile Clint Eastwood is directing a movie (out in 2015) about Kyle’s life. If the movie does well, expect Ventura to go crying to his mommy.