De Blasio Is Full Of Blarney 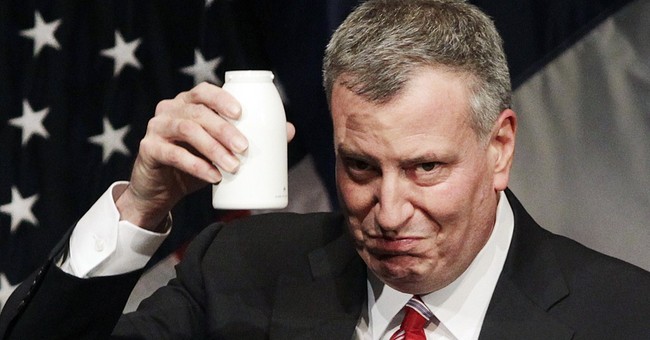 I wish my Irish eyes could be smilin’ on St. Patty’s Day. But New York Mayor Bill de Blasio has stoked my Irish temper. And that’s no blarney.

As an Irish lassie, I should be at the bar drinking green beer. Instead, I must be more austere. For Billy Boy is threatening to close New York’s charter schools by denying them the ability to “co-locate” or share real estate with public schools.

De Blasio’s story is that he is all about the children. He doesn’t lose sleep over angry union bosses. He could care less about the next election. Oh no. He has a big heart. He cares.

Which is why, after Vanderbilt Peabody College/Peabody Research Institute released a study in August of 2013 indicating that publicly funded universal pre-K could set children back cognitively—de Blasio pushed harder for universal pre-K.

In February, De Blasio’s deep love for children also motivated him to order youngsters to trudge to school while snow fell at a rate of three inches an hour and busses swerved across slippery roads.

Likewise, his heartfelt interest in children prompted him to give Chancellor Carmen Fariña the thumbs up as she warned schoolchildren that they would be considered tardy if they missed class during the snowstorm—and then proceeded to cancel her own evening meeting due to “inclement weather.”

De Blasio let Fariña ditch work for her date with Netflix—while forcing schoolchildren to attend classes in which the New York Post reports they “spent the day watching movies.” Again, it’s impossible to overemphasize that he made this decision because of his fundamental concern for children.

So, there’s no doubt that de Blasio began attacking flourishing charter schools in late February and early March because he had the children in mind. With his own son safely enrolled in the plush and prestigious Brooklyn Tech, de Blasio had ample time on his hands to help poor children succeed.

De Blasio set his laser focus on one of New York’s most successful schools—aptly called “Success Academy Harlem 4”—and began to shake things up. Many students at Success Academy are outscoring the entire state in math and the majority is outperforming their peers at neighboring public schools in both math and English. The school’s forte is helping lower-income children of color (10 percent Hispanic and 90 percent black) excel academically.

The problem with Success Academy, from de Blasio’s perspective, was that Success Academy had become too successful. He could not bear to see children overwhelmed or corrupted by progress. So, out of the goodness of his heart, he attempted to shutter Success Academy by barring it from sharing public school space.

Some people say de Blasio has ulterior motives since charter schools like Success Academy are generally non-union. Plus, de Blasio is been pushing hard for what even the New York Times calls an “unusual,” “longest-ever” 9-year contract with teacher’s unions—making some New Yorkers wonder whether he’s in bed with Big Education. Some parents blame de Blasio for robbing their children of access to intellectual advancement. At least one mother feels like her only option is to home school her children. But how could such a caring man as de Blasio; such a lover of children; such a knight in shining armor put his own political career above the future of America’s youth?

By now, me dear reader, ye may fear that I have been drinking green beer! Don’t ye worry. Here is the point I intend to make: de Blasio is full of blarney.