Kathryn Lopez
|
Posted: May 03, 2019 2:47 PM
Share   Tweet
The opinions expressed by columnists are their own and do not necessarily represent the views of Townhall.com. 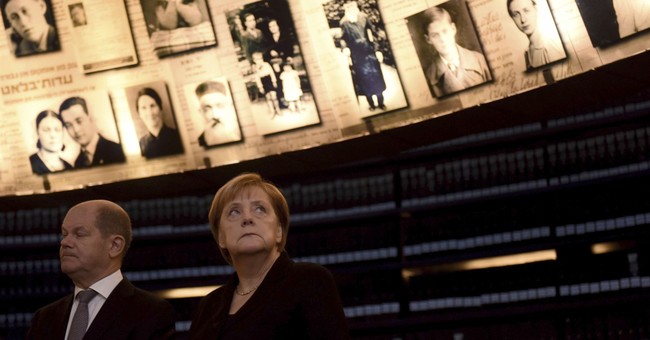 "Some kids are unwanted, so you either kill them now or kill them later."

That quote is from an Alabama state Democratic representative, John Rogers, speaking a few days ago during debate about an abortion bill.

He went on to say, "You bring them into the world unwanted, unloved, then send them to the electric chair."

He said this during the same week in which all of Israel had a period of silence to remember the millions who were exterminated during the Holocaust.

He said it while a play, "All Our Children," is running in lower Manhattan, at the Sheen Center, about Nazi Germany's systematic killing of 100,000 or so people with disabilities who were deemed "unworthy of life." Playwright Stephen Unwin called the program "the logical extension of the eugenics movement, which had attracted support from a wide range of people, many with impeccable liberal credentials, across Europe and the United States."

"By early 1941," Unwin explains, "5,000 children, many only a few months old, with a wide range of conditions -- Down syndrome, 'idiocy,' cerebral palsy and so on -- had been assessed, registered and murdered. Initially, their parents were asked for their consent, and a panel of three 'medical experts' were convened to agree on the course of action. In due course, however, deception and social pressure were deployed, and children were sent to so-called 'special sections,' apparently to receive medical treatment, but instead bussed off to their deaths."

I found it impossible to watch "All Our Children" without crying. Increasingly, I'm having the same reaction listening to Democratic politicians of all sorts seemingly falling over one another to outdo themselves in abortion extremism. We seem to have entered a new point in our discussion of the issue, in which euphemisms are giving way to a new boldness. But all the rhetorical evasions in the world can't mask the central question: Do we care to value and protect life or not?

No small part of the "All Our Children" story is about Clemens August Graf von Galen, the Catholic bishop of Munster, who spoke out against the Nazi policy of killing "unproductive citizens" (and spent years under house arrest for doing so). In one of his sermons, he said: "(W)e are dealing with human beings, with our neighbors, brothers and sisters, the poor and invalids ... unproductive -- perhaps! But have they, therefore, lost the right to live? Have you or I the right to exist only because we are 'productive'? If the principle is established that unproductive human beings may be killed, then God help all those invalids who, in order to produce wealth, have given their all and sacrificed their strength of body."

Sobering words, indeed, and unfortunately, they're still very relevant to our current cultural moment. We would do well to ponder their ramifications, regardless of our individual political beliefs.

"All Our Children" reminds us of what can happen when all life isn't valued. We can all do our parts to combat an encroaching culture of death -- we don't need to be playwrights or heroic priests. Currently, some of the excesses of Democratic lawmakers and candidates regarding abortion are routinely being dismissed as evidence of conservative hangups. You don't have to be a conservative pro-lifer to agree that vulnerable lives ought to be protected, that vulnerable mothers must be helped and cherished, and that we must think in terms of more love, not less.