Politics, Hope, And The Power Of Love

Kathryn Lopez
|
Posted: Aug 05, 2016 5:15 PM
Share   Tweet
The opinions expressed by columnists are their own and do not necessarily represent the views of Townhall.com. 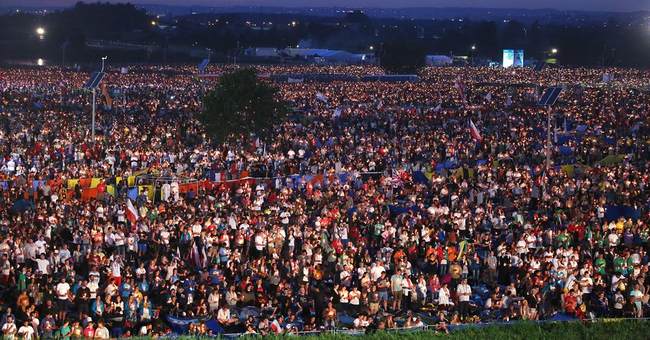 TORONTO -- I arrived in the Canadian capital from Krakow, after a week of being asked by anyone who spoke English about what is going to happen in the U.S. presidential election.

Carl Anderson of the Knights of Columbus offered some guidance during his yearly report at the annual convention of the largest fraternal organization in the world.

He talked about the targeting of Christians in the Middle East by ISIS terrorists, and the relief efforts the Knights have been leading to meet the basic needs of displaced people fleeing religious oppression and violence.

But that was not what much of the press was interested in. It is, after all, an election year.

Repeating something he said eight years ago, Anderson told those gathered: "The right to abortion is not just another political issue; it is in reality a legal regime that has resulted in more than 40 million deaths."

He asked: "What political issue could possibly outweigh this human devastation?"

People are angry and disgusted about politics. But is it of any wonder?

And yet, around the world, people look to us, still. And with some worry. Will the United States continue to be a world leader? Will we keep Vladimir Putin from acting out? These were some of the questions Poles were concerned about. The Little Sisters of the Poor fighting for their religious freedom at the Supreme Court was not on their radar so much as things closer to their border. And the implicit message as we talked was, clearly: You Americans have had a great thing going that has been of benefit to the world. Don't blow it. Don't disappoint us.

So of course, the leader of a preeminent Catholic organization would deride the state of our politics. Especially now. It's exactly because of Catholics and other religious believers not being as bold and courageous as they need to be on life issues that we are where we are today, mired in shrill rhetoric and facing two bad choices for president. Taking the Gospels and Catholic social teaching seriously in the civic life of America would help heal us and lead us to a more fruitful and healthy politics.

Anderson emphasized what Catholics cannot vote for -- "We will never succeed in building a culture of life if we continue to vote for politicians who support a culture of death " -- but did not endorse a candidate.

The next time I'm asked about the election -- abroad or at home -- I will try to stress the power we have to transform our home, preserve the gifts we have and help each other flourish. What Anderson said can be applied ecumenically: "Catholic voters have the power to transform our politics. Faithful Catholics can build a new politics that is not satisfied with the status quo but one that is dedicated to building up a new culture of life."

He added: "If we truly hope for a culture of life and a civilization of love, then we must first think, and then act, in new ways."

One of those ways is to be instruments of healing in the midst of violence and tension in our streets. Love doesn't stop at wanting to help the innocent to live. It's a way of life that helps foster gratitude, promote charity and inspire hope.

This is all why Pope Francis talks so incessantly about mercy: because it is needed; because it, at times, seems like a foreign concept; because our politics and culture are merciless and are in need of healing. No one can tell you who to vote for, but cynicism, anger, indifference, manipulation, and resignation will simply not do.