The Play's the Thing 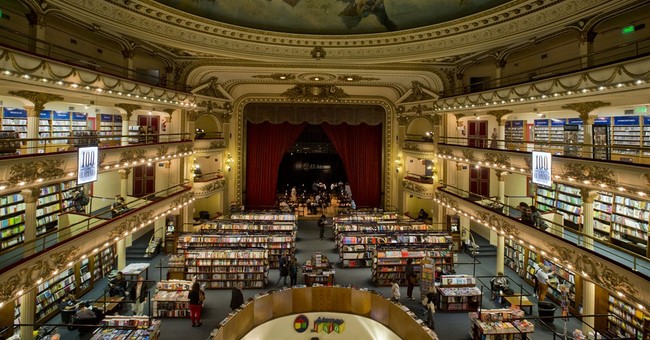 PASCO, Wash. -- In this small Washington state town, the students of Tri-Cities Prep, a Catholic high school, have found what many Americans have forgotten about in our immigrant heritage: the sacrifice and hope.

"The Guns of Ireland," a musical written by local writers Jeffrey David Payne and Mike Speegle and staged by TCP students, is about the 1798 Wexford Rebellion and the 1916 Easter Rising.

The audience and players are part of a solution, perhaps even as they think they are just enjoying a high-school musical. A student cast of names including Sauceda, Rodriquez and Zepeda sing, dance and act alongside Anglo classmates.

"The Guns of Ireland" seems like a vessel for creative and rooted healing.

Perhaps most beautifully presented are scenes paying tribute to women. The play portrays beleaguered women in all their dynamism, courage and sorrow -- humiliated and devastated and yet leaders. They point to community and a faith tradition that strengthens and supports the poor and weak, that uplifts and redeems society. During a week when a prominent New York Times columnist, just in time for Mother's Day, slammed the Catholic Church for, as his headline put it, undervaluing women, here was a tribute far beyond the caricature he laid out.

Facing inevitable farewells, two of the female leads sing: "We hope for love/And when it comes, the joy/It flows in endless waves/Then Ireland calls them to their graves/

How brave we all must be/They'll never build a statue of me."

This song, written and composed exclusively by Nina Powers for the play, stands as a tribute to quiet and graceful courage that carries on, that teaches and nourishes, just as "The Guns of Ireland" is doing for this group of teenagers, grappling with faith, history and the most intimate of human emotions in the most beautiful and appropriate of ways.

As the song puts it: "It's brave to die/Braver still to love when the men have gone/Brave to watch them die and still soldier on/We honor them in death and face life on our own."

The nobility of death for faith and country is not romanticized by any stretch of the imagination. To the contrary, the humanity of the oppressor is seen in view from beginning to end.

"If you can't forgive them, then they can't forgive us and you'll go back and forth with them across the generations, blood for blood -- and this will never end. The hate will get passed down in the womb," a character named Father Murphy puts it.

This rings true, doesn't it? In matters domestic and foreign.

During a British army exchange, a lady observes:

"What's so odd about the Irish, general, is not the way they're brave in the face of death. It's this accursed cheerfulness at the darkest times."

One thinks of the Christian martyrs of our day -- and the families that celebrate their willingness to die rather than renounce their faith.

As the students of Tri-Cities Prep sing: "But if I live, and should you die for Ireland/Let not your dying thoughts be just of me/But say a prayer to God for dear old Ireland/I know he'll hear and help to set her free."

This isn't just about Ireland. It's about our hearts; it's about our lives and our future. These Tri-Cities youths are not making political statements, but they are inspiring us to a better politics. With that song in their hearts they may just set the rest of us free again, to see what real freedom is and how its possibilities can save our lives and our souls, and yes, our country.

Madeline Leesman
Milley: China's Hypersonic Missile Test Close to a 'Sputnik' Moment
Matt Vespa
Oh, Goodie: Here's the Timeline Given Until ISIS-K Can Launch Attacks on the US
Matt Vespa
Will Alec Baldwin Be Charged In Fatal Accidental Shooting? Authorities Say All Options 'On the Table'
Matt Vespa