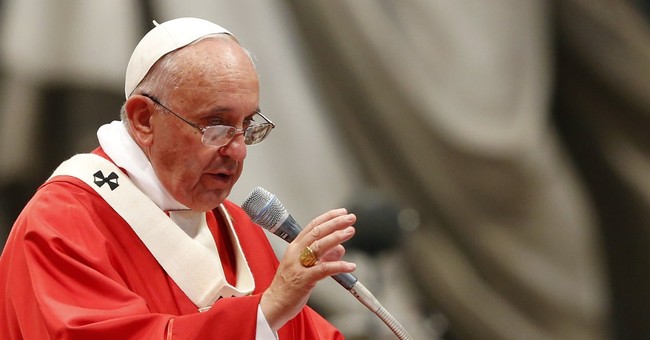 Trending
"Perhaps the Catholic church would volunteer to pony up some cash for the illegals' care then? Hmm?"

"Pope should stay out of it. Matter of civil laws, not church laws."

"Thinking that the pope should want the illegals to go to Argentina to get better soccer players for World Cup."

Those were just three Twitter responses I was tagged in, in response to a headline about Pope Francis calling so many of us out on our indifference.

Based on some of the reactions, you would have thought Pope Francis himself was giving unaccompanied minors rides in his Popemobile into the United States, encouraging the dangerous journey and chaos at the end of the road. Headlines certainly don't always help matters. The afore-quoted Tweeters were reacting to: "Pope Francis calls on U.S. to welcome illegal immigrants." His message though, wasn't a call to abolish borders and law, but to see the humanity, for goodness' sake.

What this shepherd of the leading charitable organization in the world said was that people of good will cannot tolerate a "throwaway culture"; this happens to be a leading theme of his papacy. We so often don't even look at the person next to us on an elevator. So, of course, women and children and men showing up on our border -- what is clearly both a humanitarian crisis and a political headache -- wanting a better life is abstract and foreign to most of us at best. In a message to a conference on migration in Mexico, Pope Francis addressed our current border situation: "I would ... like to draw attention to the tens of thousands of children who migrate alone, unaccompanied, to escape poverty and violence." They've largely made the trip, he wrote, from Central America and Mexico "under extreme conditions and in pursuit of a hope that in most cases turns out to be vain. They are increasing day by day." He described it as a humanitarian emergency that "requires, as a first urgent measure, these children be welcomed and protected."

Now before you agree with the Tweeters, read on. "These measures, however, will not be sufficient, unless they are accompanied by policies that inform people about the dangers of such a journey and, above all, that promote development in their countries of origin."

Instead of demanding the U.S. open its borders to whomever, whenever, the Pope implored, "this challenge demands the attention of the entire international community so that new forms of legal and secure migration may be adopted."

We live during a time when our senses are overloaded and our attention spans for other people's problems can be short. But the situation at our borders is about people we have a responsibility to as fellow human beings in a country that has much, even as we aren't always good stewards of the gifts.

We're talking about people who see -- or were told -- their recourse for hope in their lives was coming here. At the very least, we can show them love, which is not a government program or political platform. It is the people of Sacred Heart parish and the Archdiocese of Chicago and Americans opening their homes to help give a brother or sister a place to feel safe.

We fear, among other things, of course, that our country can't sustain this. That's certainly true, and this crisis is a wake-up call and a scandal, exposing layers of incompetence, lawlessness and indifference in our government and culture when it comes to immigration. It's an issue that's used as a political battering ram, as pastors who see the human fallout daily have long pled for civic responsibility and human decency.

"Solidarity means taking responsibility for those in trouble," St. John Paul II wrote in 1996. "For Christians, the migrant is not merely an individual to be respected in accordance with the norms established by law, but a person whose presence challenges them and whose needs become an obligation for their responsibility. 'What have you done to your brother?' The answer should not be limited to what is imposed by law, but should be made in the manner of solidarity."

Oh, Brother, help us, if we cannot see we cannot see through to the heart and the urgency. Our laws, our rhetoric, our indifference -- and our Twitter reflexes -- are not worthy of who we say we are as Americans.