Make Room For This View 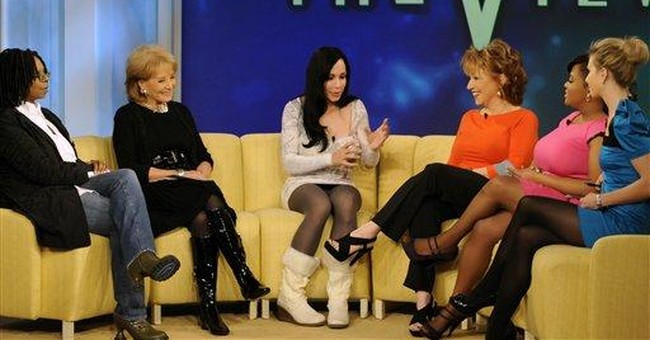 "One little man wrote this letter. And he can just go to hell."

Elisabeth Hasselbeck, one of the co-hosts of ABC's "The View," was talking about William Donahue, president of the Catholic League for Religious and Civil Rights. Donahue happens to be a knight of a man with a fearless courage of convictions. A man who loves and defends some of the most beautiful women among us. Ones who don't tend to have the megaphone that comes with starring on a daytime talk show.

The ladies of "The View" were understandably on the defense, having been criticized by Donahue in a press release after a recent show. They had expressed outrage about the excommunication of a religious sister who served as an ethics adviser at St. Joseph's Hospital and Medical Center in Phoenix, Ariz. The excommunication was not new, but it was in the news again because on Dec. 22, after extensive negotiations, Bishop Thomas J. Olmsted announced that St. Joseph's is no longer a Catholic hospital. The breaking point for this identity issue was a direct abortion that took place there in 2009 with the consent of the sister.

Hasselbeck, who is no stranger to life-defending moxie, was very clearly motivated in her anger, as some of the other women seemed to be, out of a sense of compassion. But in expressing their anger, they glossed over the details of the situation. In explaining the new status of the hospital, Olmsted said that "in the decision to abort, the equal dignity of mother and her baby were not both upheld; but that the baby was directly killed." That action was "a clear violation" of Catholic ethical and religious directives. In this painful case, "there was not a cancerous uterus or other grave malady that might justify an indirect and unintended termination of the life of the baby to treat the grave illness." But that "the baby was healthy and there were no problems with the pregnancy; rather, the mother had a disease that needed to be treated. But instead of treating the disease, St. Joseph's medical staff and ethics committee decided that the healthy, 11-week-old baby should be directly killed. This is contrary to the teaching of the Church."

"I thought they made exceptions in the case of extreme circumstances," Hasselbeck said during one of the now two segments on the issue. Absolutely, there is as much compassion inside a Catholic operating room as anywhere for the pregnant mom whose life is in danger. And she can absolutely be treated. But when the second patient is directly taken out of the picture, you don't have to call Rome to realize we have a problem.

As the bishop would also explain, the hospital and its parent, Catholic Healthcare West, were also found to be serial violators of Catholic ethical directives. And so St. Joseph's is no longer Catholic. Because, simply said, the bishop cannot assure those looking for a truly Catholic hospital that it is one By issuing a response to the segment on The View, Donahue introduced some facts that were missing from on air. He did what he does best, trying to do a little educating inside a mainstream fog. Responding to Donahue, co-host Joy Behar said that she resented Donahue's implication that "if you have doubt, that makes you anti-Catholic." But that's not Donahue's position at all. Donahue's Catholic League exists as a layman's attempt to defend against cultural and media defamation of and hostility to the Church he loves.

Behar declared, "If you criticize the dogma a little bit or you say 'maybe this institution is not perfect,' they want to excommunicate you." She's wrong about that. But if you are a Catholic official at a Catholic hospital and you say a direct abortion is licit when it's not, you and the hospital should expect consequences. It's a matter of human rights and authenticity. Those who say they're Catholic need to be clear about what that means. That's why Olmstead did what he did. And that's why Donahue will keep doing what he does.

Donahue has been called things a lot worse than "a little man." But the comment deserves a response because he's not that any more than he the "bully" that columnist Frank Rich recently called him.

In a society that claims to value tolerance above all else, Donahue calls out the lie. And in doing so he, more often than not, defends the defenders of the defenseless.

Donahue engages on fights most of us wouldn't bother with because he is consistently insistent on a little honesty, please. About facts. About agenda. He's a rhetorical knight keeping the road a little clearer for so many more soft-spoken Catholics who live their Catholicism in their service of the vulnerable. Who educate our children. Who counsel and spiritually feed us. Who are not misogynists with sexual hang-ups but with true love for God and man. In a culture where powerful forces -- including ones who consider themselves Catholic -- campaign for the strangling of that moral witness. Consider, for example, the New York Times pre-Christmas anti-Olmstead editorial insisting on mandating direct abortions in Catholic hospitals. That's a serious push and it's a chilling one. And that's one of many reasons Donahue stands tall athwart the chill. For conscience. For integrity. His temperament might not be yours, but we need men like Donahue. And we need to thank them now and again, too.