Bunning Does the Right Thing 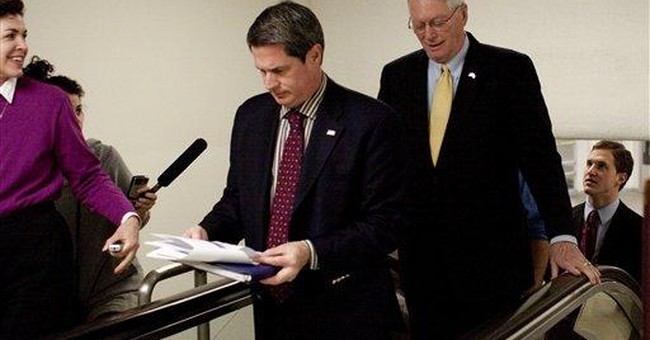 If I had a dollar for every conservative I heard say that -- sarcastically -- about Republican Sen. Jim Bunning of Kentucky . . . I could at least buy lunch at the GOP-established D.C. Caucus Room restaurant, with the wine flowing.

Bunning was making headlines for supposedly filibustering a bill to extend unemployment benefits. For days, I read and listened as he was accused of single-handedly holding the Senate and out-of-work Americans hostage. Bunning was doing this, if some of the media coverage was to be believed, because he didn't care about anything except whatever point he was selfishly trying to make. The Washington Post described him as "angry and alone, a one-man blockade against unemployment benefits, Medicare payments to doctors, satellite TV to rural Americans and paychecks to highway workers."

But Bunning's point was worth making. These unemployment payments are extra-budgetary. The federal government doesn't have the money for them; they're deficit spending. Media folk and others might feel quite comfortable condemning Bunning -- it's easy to paint him as a mean Republican seeking to hurt the unemployed -- but how about listening to him, instead?

As he put it: "If we cannot pay for a bill that all 100 senators support, how can we tell the American people with a straight face that we will ever pay for anything?"

That's a question that's going to drive more than a few tea parties and lead to more than one upset election.

Contrary to what the Democratic Party wants you to believe, Republicans occasionally do utter a word other than "No." Bunning, for one, proposed paying for the endless stream of unemployment benefits. And for that he was proclaimed an enemy of the people, by the media, by the Democrats and by members of his own party.

Maine Sen. Susan Collins, a frequent thorn in the side of her fellow Republicans (though this time she was part of a large crowd) declared that Bunning's position did "not represent a majority of the Republican caucus." She was unfortunately right. Bunning failed, and only 19 senators objected ultimately to the continued deficit spending.

This from a Congress that has pretended to be in favor of balanced budgets, enacting "pay-as-you-go" legislation only to consistently waive and ignore it.

Collins was no ally to Bunning, and far too many Republicans refused to come to his aid. But I'll tell you this much, for what it's worth: On Capitol Hill that week, I met many younger staffers who were cheering Bunning on. And I couldn't help but think of my first days in Washington, encountering a young Hill staffer named Paul Ryan from Wisconsin. Ryan, of course, is now a young congressman from Wisconsin, and has done enough homework and hard work on health-care reform and fiscal responsibility to earn the attention of even the Condescender in Chief, Barack Obama, who typically dismisses most critics.

Don't get too cynical. Instead, lend encouragement the next time a senator or congressman steps into the firing line to do something sensible and responsible that he'll be attacked for. I remember a priest once telling a group he was preaching to, "When your pastor does something good or inspiring, thank him. People often don't." It's the same in all walks of leadership life. Perhaps most of all in a legislative body with the type of approval ratings that would get most of us fired.

There are more politicians taking on the "pay-go" lie, and they could use some support. They'll take on the president's propaganda. They'll be elected in November. They'll be young staffers working for someone else, encouraged by a public that appreciates when their representatives do the right thing.