Stop, In the Name Of Love 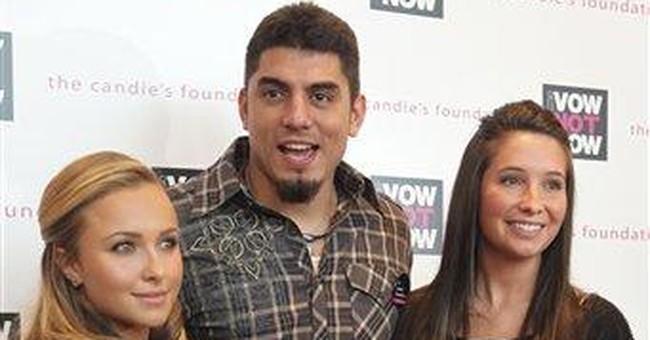 "I'm still holding out for Mr. Right, but with all the pressure my roommates place on me and the way they embarrass me, sometimes I think Mr. Okay will have to do."

That's not dialogue from a "Sex and the City" remake. It's Andrea Moscoe, 20, who is a "committed chick," according to Cosmopolitan magazine, preserving her virginity despite being in college and "living in a house with five sex-crazed girls." The women's glossy profiles several young virgins in its July issue.

Why would anyone not be having sex in this post-Victorian age? Brace yourself: Some young women consider sex an "intimate thing," according to the article. But holding out isn't easy; Cosmo finds their 20-year-old virgins on the brink of giving in.

Victoria Vikes, who at the ripe age of 23 is one of the older girls featured in the article, says, "Sometimes my virginity feels like a handicap. Dating is difficult enough without that hanging over my head. I might just settle for the next semi-decent guy who comes around."

Andrea and Victoria are representative of the women profiled. Most of these gals aren't even thinking the "l" or "m" words -- love and marriage. They simply want to wait in order to find a mate they will remember, or be "comfortable" with, or who will be "someone they trust."

Brooke Shields would tell them to just get on with it, already. In an issue of Health magazine, the "Blue Lagoon" actress and mother of two daughters named her biggest health-related regret: "I think I would have had sex a lot earlier! ... I think I would have lost my virginity earlier than I did at 22."

At the young age of 20, Miss Moscoe gets what Shields, at age 44, doesn't. Moscoe tells Cosmo: "My roommates always tell guys I'm dating about my virgin status, and tease me. I think it's because they are insecure and want the guys to get scared off or because they're jealous that I'm stronger than they've been."

And when Moscoe weakens and starts looking longingly at Mr. Okay -- or Mr. Right Now -- she ought to talk to some Newark public-school students. The nonprofit Best Friends Foundation sponsored an essay contest asking participants in its abstinence-education program to explain the program's significance in their lives. Hannah, a sixth-grader at Louise A. Spencer Elementary School, explained that the program taught her that she has "the right to say no to sex and drugs ... to respect myself and the ones around me ... to have trust, faith and self-esteem."

In other words, Hannah's self-worth isn't determined by her scores in the "Love Game," as the Lady Gaga song crudely terms what is far, far from real love. Quonia, a student at Chancellor Avenue School, also understands this important lesson. "There are plenty of times when boys have told me things that I wanted to hear just so I would have sex with them. But I didn't and I am proud to say that I'm in the eighth grade and I am not sexually active," she declares.

Best Friends' abstinence-only mission would be deemed "unrealistic" by many well-funded sex-ed wonks. But according to a 2005 study in the journal Adolescent & Family Health, students in D.C. public schools who participated in Best Friends' program were 6-1/2 times less likely to have sex than their peers. But while Best Friends challenges children and teens to say "no," it provides much to say "yes" to as well; showing inner-city kids they can have a full life that doesn't get its purpose from sex. Imagine: sex could be a beautiful expression of happiness and love instead of a casual, reckless or desperate search for a shabby substitute.

Maybe they should quote her in the next issue of a certain women's glossy. Hannah and her friends might be the inspiration that Cosmo girls need.

Did You Notice Kamala Harris At That Infrastructure Announcement?
Townhall
'The a** whooping of facts': Christopher Rufo fact-checks Joy Reid on Critical Race Theory in must-read thread
Twitchy
Biden Threatens to Nuke Americans but Manages to Blow Up a Big Democrat Narrative Instead
Redstate
The Systemic Con Behind Wokeism
PJ Media