Giving Thanks in Times of Trouble 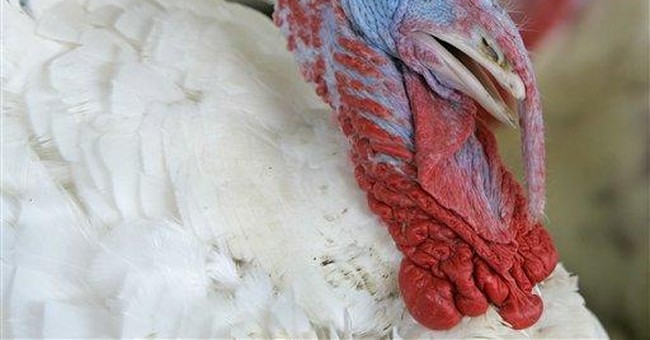 It was exactly one week until Thanksgiving as I watched the attorney general of the United States, Michael Mukasey, collapse a few feet away from me. He was nearing the end of a speech to the Federalist Society in Washington, D.C. The former New York judge was giving an impassioned defense of the Bush administration's efforts to rein in an activist judiciary (despite congressional pushback), its leadership in fighting the war on terror and the bold steps it has taken to keep Americans safe at home. He talked about his hopes that the Obama administration will take its responsibilities seriously, retaining some of the legal structures of its predecessor, contrary to what some of "the intemperate rhetoric would seem to suggest."

As it happens, during that same gracious and important speech, he was heckled and called a "tyrant" by one of the dinner guests.

It was the top of the month when the majority of voters in California approved a proposition that would protect the traditional definition of marriage in the state, in the face of renegade courts' past struggles to redefine this fundament of society. I'm grateful that even voters who most likely helped elect Barack Obama president can see the value in sacred, age-old ceremonies. I'm grateful that there are people like my friend Maggie Gallagher, who heads the National Organization for Marriage, and fights the good fight for the traditional idea of family, despite viciously unfair enemies and defeatist colleagues.

I'm grateful to live in a country where, although there are people who may run to TV news cameras bearing hateful, anti-Mormon signs and call in threats to Mormon temples because many of the Latter-Day faithful supported the proposition, there are also those who will fight for religious liberty, like the folks at the Becket Fund. There are politicians who will speak in its defense, like Mitt Romney. He may get attacked unfairly, in some cases because he is Mormon, but he has a genuine moral core and ethical calling that sets him above petty criticism.

I'm grateful to work at a magazine founded by one of the most generous employers and brilliant of men. Because of the life and work of the late William F. Buckley Jr., conservatives will never be seriously lost in the wilderness. I'm grateful for the happy warriors following in his footsteps, in print, on the radio and on the Internet, caring about the "right" ideas. I'm grateful to see resilient optimism on a temporarily losing side.

I'm grateful for people who, although they voted for the other guy, and are depressed and even angered by how the presidential election turned out this year, pray and wish the president-elect well, for the sake of the country.

I'm grateful for all of you who have medical skills. My mother can walk because of you. I am grateful for those who opt for low-salaried positions in religious schools because they know it takes good teachers -- at home and at school -- to raise a child with a moral conscience who will serve his fellow humans well. I'm grateful for those who fight for and err on the side of life. In Massachusetts, a teenage girl named Haleigh Poutre was allegedly beaten to near-death by her stepfather and determined to be a lost cause. Because someone bothered to fight for her right to stay on life support, she's alive and doing well today.

I'm grateful that Sarah Palin came on the national scene this year, holding her young son, Trig, shining a bright light on the children who are never allowed to be born in this country.

I'm grateful to those who make us laugh, think and escape through their creativity in books, TV and movies. I saw "The House Bunny" right before hauling off to the two conventions this summer and couldn't be more grateful for the break. It's a very silly film, but one with heart, a little soul and even a sneaky abstinence message for the road! I can write as many columns as I want, but culture is what moves people. " The House Bunny" may not start a cultural revolution, but Hollywood is a powerful vehicle, as moviemakers and consumers should always bear in mind. I am grateful to those who realize that with great power comes great responsibility.

I'm grateful to live in the greatest country in the world, where we sometimes even have civil debates. And where I sometimes even get civil e-mail. I'm grateful that Mukasey was standing long enough to give a spirited defense of an administration that's going to get a lot of grief as the Obama faction takes power. I'm grateful there are honest historians out there -- somewhere -- who will consider that there is a real reason we were not attacked again after Sept. 11. And that President Bush will get some credit for being a good leader and president.

This Thanksgiving, raise a glass for those who make our feasts in a free country possible.