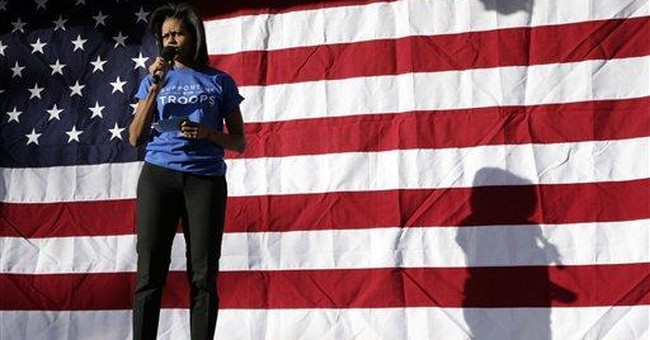 Michelle Obama did an odd thing during her speech on the opening night of the Democratic National Convention in Denver: She turned back the clock on feminism.

While praising Hillary Clinton for creating 18 million cracks in the glass ceiling, the wife of the Democratic presidential nominee heralded herself as what sounded like a traditional stay-at-home mother. (In fact, she works outside the home and gets paid well.)

But in that speech, she displayed all the feminine virtues and showed off her softer side. It was genius -- even if it was all just to win.

Previously she was known, especially to Sean Hannity's audience, for announcing that she is proud of her country for the first time in her life because her husband is running for president.

But on Monday night, in complete support of her husband's campaign, she praised the roles of mother, daughter and sister. In emotional terms, she lauded her husband's commitment to being a devoted father to their daughters. She emphasized the importance of fathers, noting how the absence of a father had affected her husband.

For just one moment in time, the Democratic Party's candidate for first lady put the unnatural -- but much too often touted -- values of the left in suspended animation. Instead of disparaging traditional family values, she praised them to the limit, for as much time as the party would let her.

Let's be clear: It's not a song she always sings. Speaking to a group from the Democratic National Committee's Gay and Lesbian Leadership Council, Mrs. Obama said, "... we must fight for the world as it should be. A world where we work together to reverse discriminatory laws." One of those "discriminatory laws" was The Defense of Marriage Act. Somehow, this did not make it into her primetime TV address.

A video introducing her before her speech starred her mother, gushing with pride for her daughter. Her brother -- who coaches football, not usually on the list of approved feminist sports -- talked protectively of his kid sister. Mrs. Obama challenged the packed Pepsi Center audience to keep their eyes dry as she remembered her late father and the values he had taught her and her brother.

It's a fascinating contradiction that liberal feminists live. Earlier that opening day, at an "Unconventional Women" event sponsored by a coalition of feminists' groups, members of Congress talked about the differences between men and women. Men, for instance, simply can't bring to the legislative table the same concerns that women do. They, apparently, are biologically incapable of realizing that men and women have different health needs. And so, congresswomen will, in the same breath, praise their own efforts on gender-parity healthcare reform (because there are real differences between men and women) and also complain about the lack of equal pay and the failure to ratify the Equal Rights Amendment; a relic left by the trash heap of history somewhere around leisure suits and disco.

Some women have commented that perhaps Michelle Obama was being "post-feminist." Following this Ivy League-law-school-educated career woman and loving mother's lead, women can once again be feminists while embracing the traditional roles of women.

I wouldn't go that far.

Like her husband, who has been known to talk about the importance of fatherhood, Michelle doesn't go far enough. I presume that's because even if she wanted to, she couldn't: The party wouldn't let her. It's the reason, I assume, that Barack Obama can't bring himself to do a full-on Bill Cosby and challenge men -- and specifically black men, because he can -- to be responsible fathers. He could talk passionately, opening up about what it was like to grow up without one.

The Obamas know what works -- good, solid, traditional families with a mom and a dad. They are also in the rare position of actually being able to say that. But they won't.

While some women whine that they won't see one of their own become president next year, they should really be challenging the Obamas to tell the honest truth about family values.