Huckabee No Savior for McCain 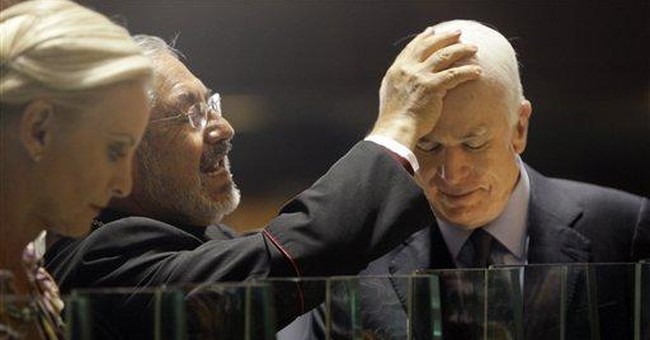 In Texas just before Independence Day, former Arkansas governor and Republican presidential contender Mike Huckabee co-sponsored a "Rediscovering God in America" pastors' conference. The event, Huckabee said, was "to remind and encourage us that the proper position for America when facing evil and confronting enemies is not to find excuses for defeat but to find the resources, the courage and the strength from God necessary to win." But if John McCain thinks Huckabee as veep will give divine strength to the GOP ticket in November -- he's wrong.

For some in the McCain campaign -- most notably, McCain himself -- a "social conservative" is such a foreign entity that they are flying blind trying to secure that key GOP constituency. Despite his pro-life voting record, Arizona Sen. McCain is on record this election cycle making it clear he has little interest in such issues. Knowing this, conservative evangelicals are not overjoyed at McCain's nomination.

The problem with Huckabee is that he is not conservative. When Huckabee won the Iowa caucus in January, conservative Club for Growth President Pat Toomey declared, "Huckabee's win in Iowa is a temporary setback for conservatism." The former Republican congressman from Pennsylvania continued, "It often seems like Huckabee goes out of his way to anger the other elements of the conservative movement instead of courting them, dismissing his critics who believe in economic freedom and a strong national defense as members of the Washington establishment, Wall Street millionaires and secular elitists."

Toomey is far from alone. Conservative talk-radio leader Rush Limbaugh declared Huckabee "not a conservative" during the primary fight. Although Huckabee struck an attractive populist tone, his solutions tend to be statist. It's no surprise he'd run a big-government campaign: He was a statist as governor of Arkansas. The Libertarian Cato Institute gave him a "D" rating on fiscal policy when he was in Little Rock; spending increased at three times the rate of inflation during his tenure there. Further, Huckabee is a protectionist and proved during the primary campaign to know very little about foreign policy. While McCain certainly has that ground covered, Huckabee can't pass the "plausible president" test a vice-presidential pick really ought to -- and will need to, especially this year on the Republican side, with a 72-year-old candidate at the top of the ticket.

And how, exactly, is McCain to make an issue of Barack Obama's naivete on the Iran issue if Huckabee also wants to meet with Mahmoud Ahmadinejad?

In the months since he's dropped out of the race for the Republican nomination, Huckabee has done himself no favors. First, there was his disgraceful, juvenile joke about Obama at the National Rifle Association convention. Then there was an exhortation to fellow Republicans not to "demonize" Obama. But no responsible Republicans are demonizing him, so why insinuate that they are? The unnecessary warning once again served to make conservatives wonder whether Huckabee actually knows -- much less is one of -- them.

In substance and style, Huckabee is bad news. Having run ads calling himself a "Christian leader," Huckabee ran on identity politics -- usually a mainstay of liberal Democrats. Although he had the third-highest number of votes in the Republican race this year, polls also showed him a tough sell with nonevangelical Republicans, who felt they had little in common with his mixed record as a conservative.

The Arkansas pol doesn't even offer an outside-the-Beltway thinking. He showed that recently by endorsing Alaska Republican Congressman Don Young's re-election bid. He, too, is a liberal-in-disguise, one with a penchant for government handouts (famously, the $223 million "Bridge to Nowhere"), and under an ethical cloud (and a federal investigation).

With McCain's own troubled past and record with conservatives, he doesn't need to add to the ideological muddle. Despite his impressive turnout in the primaries, Huckabee would be a bad choice to join the Republican ticket. Lead McCain not into temptation.