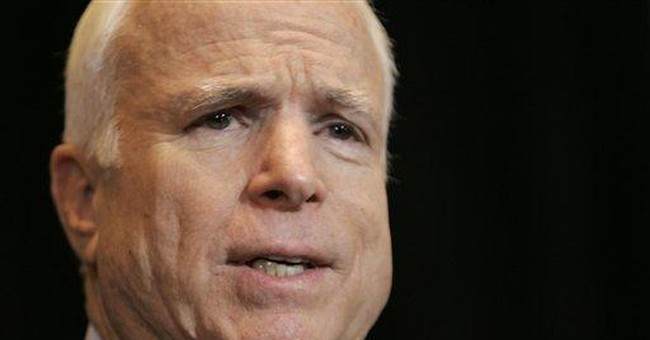 The presidential race is sure looking like it will be Democratic Sen. Barack Obama versus Republican Sen. John McCain. Team Obama is no doubt overjoyed, having already run with the "yesterday versus the future" rhetoric that is typical for a fight between a charismatic 46-year-old and a 71-year-old Vietnam War veteran. But Team McCain, despite its outreach problems even among the GOP's base, needn't despair. Obama, a senator in only his third year, can be beaten. If only McCain would try.

Just days after Chris Matthews reported experiencing a thrill up his leg when Obama spoke, the "Hardball" host lambasted a Texas legislator who braved the MSNBC talking-heads show to do his part in support of Obama's campaign.

Matthews was merciless: "What has he accomplished, sir? You say you support him. Sir, you have to give me his accomplishments. You've supported him for president. You are on national television. Name his legislative accomplishments. Barack Obama. Sir."

The poor local pol's answer was instructive (and accurate): "Well, I'm not going to be able to name you specific items of legislative accomplishments."

The local pol: "No, I'm not going to be able to do that tonight."

Matthews: "Well, that is a problem isn't it?"

It sure is. McCain has both an authority that comes with real experience in Washington and a good-old-boy likeability to anyone who's not working with him (he's known for outbursts in the Senate), plus he doesn't have the high negatives his colleague Sen. Hillary Clinton suffers from, perhaps fatally. McCain can adopt the "ready from day one" meme the former first lady has unconvincingly and patronizingly used with Democratic primary voters. He can do it with a legitimacy Clinton never has had.

He needs to make the fullest possible use of this obvious advantage. He needs to embrace the fact that he doesn't have a naive belief that he can wave a magic wand and remove our troops from Iraq the day he is inaugurated. He's a responsible leader, so he knows that left-wing promises to "end the war in Iraq" are euphemisms for losing the war in Iraq. However, he who campaigned for his early primaries on a "No Surrender Tour" needs to go beyond what has been his saving grace with conservative voters -- the fact that he was the leading advocate of the "surge" policy that Gen. David Petraeus has successfully executed in Iraq, at a time when that position was very unpopular in Washington. As Congress went into the Presidents' Day recess, McCain missed a great opportunity to show he's willing to be a leader. When Congress faced a deadline to continue a post-9/11 reform that allows intelligence officials to monitor foreign terrorists overseas, Congress went on vacation without getting a bill to the president's desk. As the House defiantly and recklessly refused to act, McCain could have taken the opportunity to show leadership on the domestic front of this war against us, using the deadline as a clarifying moment in both the election and the war.

After winning the Wisconsin primary the following week, McCain took aim at Obama. He declared: "I will fight every moment of every day in this campaign to make sure Americans are not deceived by an eloquent but empty call for change ... that promises no more than a holiday from history and a return to the false promises and failed policies of a tired philosophy that trusts in government more than the people. Our purpose is to keep this blessed country free, safe, prosperous and proud. And the changes we offer to the institutions and policies of government will reflect and rely upon the strength, industry, aspirations and decency of the people we serve."

For all his faults, Rudy Giuliani -- when it came to terrorist surveillance -- was clear and unrelenting. He talked like the prosecutor he once was, tracking down and convicting mobsters. Maybe McCain needs a talking to the next time Rudy does a campaign appearance for him. If McCain means what he says, he needs to fight the whole war. He can convince the nation he belongs in the White House, but he's going have to lead on security, both foreign and domestic, to do it.