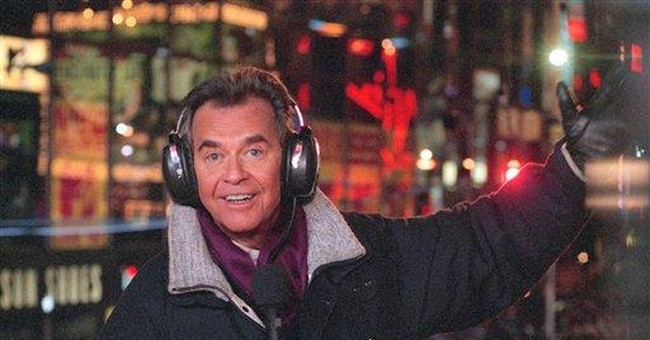 Summing up, let me just say that I reject, repudiate, renounce, denounce, dismiss and utterly regret 2008.

Which is not intended to convey offense toward anyone of Japanese descent, nor to serve as commentary on any but the preceding 12 months of the Gregorian calendar. Not that other calendars, including the Goddess Lunar Calendar, aren't perfectly good.

In fact, I categorically denounce any person or statement (or calendar) that disparages or causes distress to any living creature on this great planet or that serves to divide us from any other planet in this universe -- or any other -- and such creatures as, therein, may reside.

That being said, it is still nevertheless true that Barack Obama's middle name is Hussein.

I mention this not to cause trouble, because I categorically renounce trouble, but to cite one of the many odd utterings that defined 2008 as The Year of Denouncing and Repudiating.

Despite our professed respect for walking the walk, talking the talk is the real deal-breaker, as the past year has made clear. It is now required that anyone seeking public office be prepared to denounce any and all who have ever said anything remotely offensive to anyone. This is potentially quite a long list.

It is also a rather odd exercise, a sort of redemption-by-proxy whereby the innocent confessor, having committed no offense other than to enjoy an endorsement or association, seeks absolution through repudiation of the "guilty" party.

Thus, Barack Obama sought and was granted redemption by leaving his church and distancing himself from the Rev. Jeremiah Wright, his spiritual adviser for 20 years. The questions that mattered most were never really satisfactorily answered: Did Wright's now-famous rants represent his body of work? And, did Obama tolerate, not notice or not care about his preacher's offensive words?

But never mind. More important than the content of a 20-year history was the denunciation, though even that sometimes isn't enough. Judgment, as always, is in the eye of one's opponent.

Hillary Clinton challenged Obama's denunciation of Louis Farrakhan, saying that Obama should have rejected the Nation of Islam leader's endorsement. Obama said fine. He would "reject and denounce" if that would make Clinton feel better.

And then he made her secretary of state. And she did feel better.

Cunningham couldn't resist repeatedly mentioning Obama's middle name. Thrice he crowed "Hussein" as he stoked a Cincinnati crowd before a McCain appearance. After the rally, McCain expressed regret for "any comments that may have been made about (Hillary and Obama) who are honorable Americans."

McCain also was forced to reject Hagee's endorsement after learning of the minister's comments that Adolf Hitler was actually fulfilling God's will by advancing the Jews' return to Israel. Hagee repudiated his repudiation, saying that his comments were mischaracterized.

Next the Council on American-Islamic Relations insisted that McCain repudiate the endorsement of the Rev. Rod Parsley, an Ohio minister who has said that Islam is "an anti-Christ religion that intends through violence to conquer the world." McCain, who once had referred to Parsley as a "spiritual guide," caved under pressure and rejected his endorsement as well.

Other calls for repudiation came when Rep. John Lewis of Georgia condemned the GOP for "sowing the seeds of hatred and division," which, though not untrue, prompted conservative black leaders to denounce Lewis' remarks.

With no one left to denounce or repudiate, the American electorate repudiated everything else. Not just Bush's presidency and the GOP, but America's benighted past. Obama is Repudiation Personified. Given his cult status throughout the known world, it may be a matter of time before Washington becomes a western Mecca for Denunciations and Repudiations. Already the line is forming.

Given a likely future rich in such demands, Obama might consider creating a new Cabinet position -- a Department of Repudiations to evaluate requests and make recommendations.

Alternatively, the president-elect could denounce denunciations on demand and repudiate repudiations as the impotent posturings of a pandering past. He could punctuate his point by, say, inviting a controversial, divisive evangelical minister to deliver the inaugural invocation.