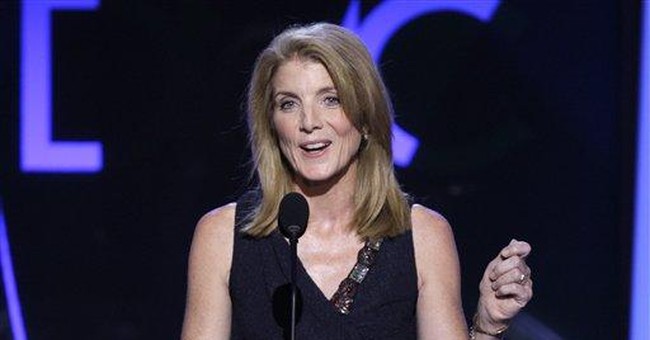 WASHINGTON -- But of course Caroline Kennedy will become the next senator from New York.

Does she deserve it? Not really.

Does that matter? Probably not.

Kennedy's likely appointment to fill the seat being vacated should Hillary Clinton be confirmed as secretary of state is the sort of fait accompli Americans claim to hate, yet seem to find irresistible.

It almost goes without saying that no one would pay Kennedy any attention were she not the beneficiary of a famous name -- and the daughter of a martyred president.

We don't do birthright in this country -- except when we do. John Quincy Adams and George W. Bush come to mind. We don't elect people on the basis of a recognizable name -- except when we do. Who, after all, was Hillary Clinton other than the wife of a governor and president before being elected to the U.S. Senate from a state where she established a token residency?

Even so, Clinton has proved herself in the Senate, winning friends and grudging respect across the aisle. She performed admirably as a presidential candidate, despite her murky memories about being under sniper attack in Bosnia.

We may protest that this is not enough, but we apparently don't really believe it. There is probably a psychological term for what ails us. Symptoms: Prefers familiarity to the unknown; demonstrates attraction to monarchical rule against democratic self-interest. Diagnosis: Americans don't really mind dynastic rule just so long as no one points it out.

The persistence of Bushes, Clintons and Kennedys the past half-century should inhibit the impulse to protest.

Not that no one has objected. Republicans have responded on cue. Caroline Kennedy is inexperienced, say party leaders who just weeks ago were saying the same thing about Obama. Rep. Pete King, a Long Island Republican who also has expressed interest in the Senate seat, says he's more determined than ever to run in 2010, when the governor's appointee would have to seek election.

"As far as a record of achievement, I strongly believe that I'm much more qualified, much more experienced," said King. "Nothing against Caroline Kennedy, but I don't think anyone has a right to a seat."

No argument here. It isn't fair. Others are doubtless more deserving/qualified. New York Attorney General Andrew Cuomo comes to mind. But then, would he have won his current post had not his father, Mario, been governor?

Democrats, too, have questioned whether Kennedy has the necessary experience and fire in the belly. On the other hand, how hard is it, really, to be a senator? Not very, though it is hard to be a great one. How effective one is often depends on skills and qualities not always measurable by resume.

Temperament and intelligence are the new tropes of which we seem most fond these days. Political Prozac is what we're after.

Kennedy offers all of the above. A gentle spirit who conveys humility despite her sterling origins, she is an attorney and author who until now has shunned publicity. She is an accomplished philanthropist. To her credit, she has raised three children out of the spotlight. No babies as props for this child of tragedy.

Do such things qualify her for the Senate? No. But they do speak to her character and approach to life. And it doesn't hurt that the president-elect has referred to Kennedy as "one of my dearest friends."

There is otherwise a certain logical symmetry to a Sen. Caroline Kennedy, even if her anointment offends everything we claim to value -- merit, struggle, and earned rather than inherited privilege. A Democratic woman replaces a Democratic woman and the Kennedy dynasty continues.

No one should find solace in the now-popular refrain that at least the seat isn't for sale, as in Illinois, where Gov. Rod Blagojevich allegedly tried to auction Barack Obama's U.S. Senate seat. Of course, Clinton's seat is for sale.

Caroline Kennedy, who brings to the table a powerful political name, a family fortune and a friendship with the new president, is merely the highest bidder in a silent auction.

It may be a classier act, but it's still the same play.