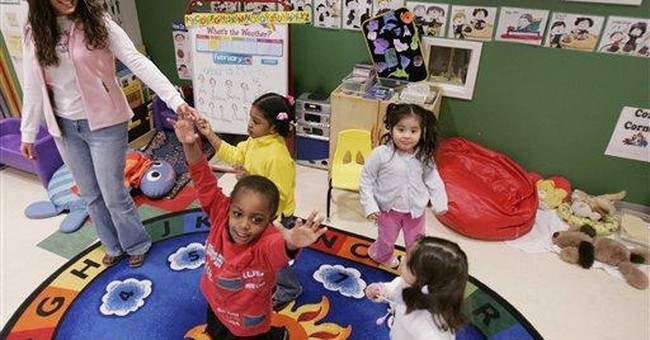 WASHINGTON -- The only thing more tedious than doing housework is reading about housework.

Yet with the gritty determination of a committed obsessive-compulsive, I plowed through an 8,000-word New York Times Magazine expose on the current state of gender equity in the American home: "When Mom and Dad Share It All."

Child care is even more lopsided.

Apparently, these ratios hold true across most demographics, regardless of whether couples are white-collar or blue-collar, upper class or middle class.

Writer Lisa Belkin does yeoman's work in trying to pierce the mystery of why these divisions of labor haven't changed with the times. She interviewed social scientists and earnest couples who are charting new territory with graphs and lists -- enough to furnish a multitasker's most exotic dreamscape.

But little truck is given to the obvious: Men and women are hard-wired differently. Of course, that sort of statement will get you run off of college campuses these days -- ask Lawrence Summers -- but common sense and experience often explain what science cannot.

Gender theorists who insist that only socialization is to blame for the unequal divisions of labor tend to search for any explanation other than simply that men and women may have different preferences.

One whom Belkin quotes points to cultural "messages" to explain the gap. When people see a pregnant woman and her husband, for instance, "How many people have asked her if she is going to go back to work after the baby? How many have asked him?"

Ah yes, now it's perfectly clear. We're supposed to deduce from this implied gender bias that men would stay home more often with their newborns if only society got it that men have babies, too.

Except they don't. Women do. It should go without saying that a mother, having just given birth -- which is somewhat more taxing than counting contractions with a stopwatch -- might be more likely to stay home with the little critter for a few weeks, though preferably much longer.

The same scientist blames social pressures for the perception among many men and women that the sexes simply have different housekeeping and parenting standards, as couples often concede after living together for about 10 minutes.

To what end these labored studies?

Trying to figure out how to balance careers and family is a daunting endeavor. Couples are indeed hassled by modern stresses and those working outside the home have to be part magician to keep all the moveable parts in place. But somehow couples do work these things out without the aid of manifestos and PowerPoint presentations.

Or so one would think.

Gender theorists, meanwhile, may be saddled with a doomed task, trying to fit the square peg of reality into the round hole of hope. Sometimes things just are what they are. And wishful theory is no match for nature's stubborn ambition.

At the University of Virginia, Steven E. Rhoads -- author of "Taking Sex Differences Seriously" -- led a study of 184 tenure-track academic couples and found that even the most presumably enlightened people within our culture fall into the same patterns because, well, they just do. Women -- including university professors -- "simply like child care more than men and are reluctant to cede many child care duties to their husbands," concluded the study's authors.

Harvard zoologist E.O. Wilson wrote in his book "In Search of Nature" that "what is" in human nature -- and what may explain our rut of domestic inequity -- probably goes back to our Pleistocene hunter-gatherer forebears.

None of which means we can't change, but it might take some time. Genetic bias isn't as malleable as gender bias and is intense enough, writes Wilson, "to cause a substantial division of labor even in the most free and most egalitarian of future societies."

In the meantime, couples might toss their calculators and flowcharts and enjoy the ride. It's short -- and, on good days, messy.