Masterpiece Cakeshop II: If You Can’t Say No, Your Yes Means Nothing

Karen Kataline
|
Posted: Aug 20, 2018 8:56 AM
Share   Tweet
The opinions expressed by columnists are their own and do not necessarily represent the views of Townhall.com. 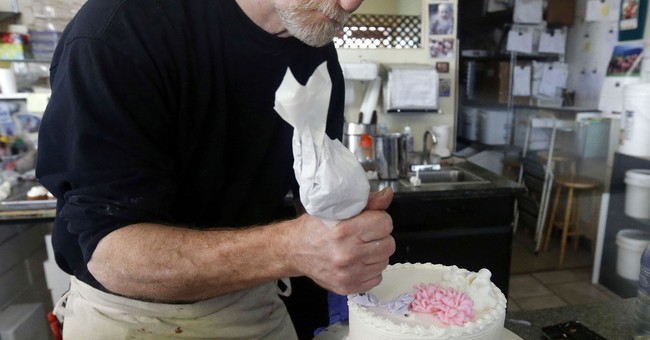 As an assertiveness trainer, I made up an axiom: "If you can't say no, your yes means nothing." Our belief that we aren't allowed to say no can be a form of self-imposed slavery. We have even bigger problems when our government typifies that belief.

Once again, the Colorado Civil Rights Division (CCRD) is targeting Jack Phillips, the owner of Masterpiece Cakeshop. The original drama lasted more than six years and concerned Phillips' refusal to create a custom wedding cake for a gay couple. The finale came in June 2018 with a 7-2 Supreme Court decision in Phillips' favor.

The sequel to this story debuted recently when news broke that the CCRD ordered Phillips into "compulsory mediation" for a new discrimination charge. The complainant this time is Autumn Scardina, a transgender attorney who requested a custom cake to celebrate his/her gender transition. Scardina has allegedly targeted this shop in the past with sexually explicit and satanic cake requests.

The relentless hatred of these intersectional inquisitors is clearer than ever. They cannot allow this man to go unpunished for disagreeing with their precepts of what he must think and believe--lest we all think it's allowed.

It is immaterial whether you like or agree with Jack Phillips, whether you are a Christian, or you would have chosen to bake that cake. If the CCRD succeeds in their vendetta, you will have to conform to their whims too.

Leftists are adamant, but that hardly means they're consistent. They regularly and openly exhibit their erratic orthodoxy: They dictate changes to the number and meaning of pronouns, but can't decide which ones they're planning to force us to use. Formerly they loved Russia and thought women were invincible; now they loathe Russia and think that women are as frail as hothouse flowers.

In the new CCRD complaint, Autumn Scardina emphasizes that s/he belongs to a "protected class." The Left used to embrace the equal protection clause, but now they prefer EEOC regulations that have established these "protected classes." The result is unequal protection under the law. It is suddenly okay to think some people are more equal than others. In fact, they are prepared to force you to think so.

These laws provide the perfect excuse for the perpetually-aggrieved Left to project their own hatred onto Phillips by claiming that he's the bigot. Why is it that the people who are the least fit to lord themselves over you are usually the ones who want to?

Leftists had no problem justifying the refusal of anti-Trump designers to create clothing for Melania before she bothered to ask. Jack Phillips, however, must be punished and even destroyed because he said no to creating a custom cake that would convey a message with which he disagrees. Why? Because Autumn Scardina belongs to a "protected class."

Along with people like Jack Phillips, such laws harm the very people they were supposedly created to protect. Remember when Liberals believed that being a non-conformist was a good thing?  That standing alone against the tide built character?  That people who thought differently could change an industry as did Steve Jobs or win a country's independence as did Gandhi?  Celebrating our uniqueness was the refrain of liberals and they were never shy to remind us of it.

I can hear them now: "You're equating anti-gay bigotry with Gandhi? Quick! Call the CCRD!"

Disapproval is not the same as hatred. People don't commit crimes against others simply because they disapprove of them. In fact, a case could be made that criminality increases when thoughts are made into faux crimes. The mentally unstable have particular trouble distinguishing between thoughts, feelings and actions. Let's not sanction the further blurring of those boundaries by our government.

We have sufficient and necessary laws which provide equal protection to all citizens in the event that a crime has been committed. One has to wonder why the Left regularly demeans, diminishes, and sometimes even opposes those laws.

The ability to tolerate disapproval is one of the rites of passage into adulthood. One-size-fits-all mandates for personal and business relationships encourage a generation of Americans to remain in their childhoods. If people are prevented from exploring their own beliefs and choices, they never have the opportunity to learn from the consequences of those choices.

The net effect of all of these decrees and directives is to stifle individualism. The Left has had an attack of honesty recently about their love for socialism. Is that what this cake case has really been all about?

We are living in times so twisted that some people believe their own freedom depends on the approval of others. Therefore, they think it's reasonable for the government to force you to give this approval to them. If they are not disabused of this notion in the courts, none of us will be much more than slaves.

Are we really free in America? For the answer to these and other questions, stay tuned for the next installment of Jack Phillips and the Masterpiece Cakeshop.