Justin Haskins
|
Posted: Oct 30, 2018 12:01 AM
Share   Tweet
The opinions expressed by columnists are their own and do not necessarily represent the views of Townhall.com. 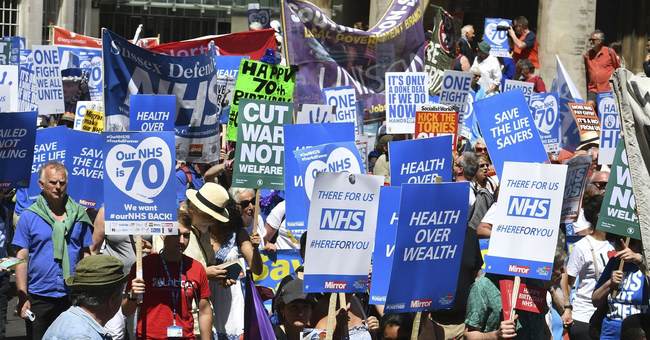 The 2018 midterms could be remembered as a turning point for America’s health care system.

Until recently, only the far left of the Democratic Party openly called for the United States to completely abandon capitalism in our health care system in favor of socialized medicine. Few remember that when the Democrats last had control of the House of Representatives, in 2010, most Democrats chose to reject pushing for a single-payer health care model, despite the fact they had control of both houses of Congress and the White House. Even then-President Barack Obama, a longtime supporter of enacting a single-payer scheme, told members of his party that it would be better, at least temporarily, to pursue a more moderate course.

Fast-forward to 2018. Emboldened by Sen. Bernie Sanders’ success in pushing his “Medicare for All” single-payer model while running for president in 2016, many congressional Democrats have radically changed their tune. Not only has single-payer health care become one of the defining issue for Democrats today, in many respects, it seems as though it’s the party’s only issue of significant importance—other than calling for the impeachment of President Donald Trump, of course.

This phenomenon isn’t limited to federal elections. Many gubernatorial candidates are saying it’s time for government to take over the health care marketplace. For instance, in “purple” Florida, Tallahassee Mayor Andrew Gillum, the Democrats’ choice to recapture Florida’s governorship, has been a vocal supporter of Sanders’ single-payer scheme, although he admits it would be difficult for Florida to enact single-payer on its own.

But while the cries for socialized medicine have grown louder in the United States, across the pond, England’s national health care program, the National Health Service, is facing huge difficulties liberals in America don’t want you to know about.

Earlier in October, reports emerged that the National Health Service’s forthcoming 10-year plan will include a policy change that will make group appointments with primary care doctors the “default” option for those with long-term health problems. Under the new model, patients will be expected to meet with doctors in groups of 15 to save money and time. “It is billed as an attempt to alleviate strain on family doctors, many of whom complain of being overworked,” a report by The Telegraph (U.K.) noted earlier in October.

During these group primary care visits, which will reportedly last about two hours each, patients will be expected to share their health care concerns as they would normally in more traditional one-on-one appointments.

Now, I know what you’re thinking: Who would ever want to discuss sex, obesity, hemorrhoids, or any other deeply personal health care problem in front of a group of 14 other strangers—or, even worse, neighbors? But fear not! The government masterminds in England have a solution: Groups will be formed based on common health problems, such as diabetes and erectile dysfunction, because, you know, all people with diabetes and erectile dysfunction are basically the same. And to ensure no one in the group discusses the ailments of others when the group primary care session ends, each person will be required to sign a confidentiality agreement pledging not to share what they heard with people who weren’t present for the appointment.

I can’t think of a more bizarre and insulting way to treat patients suffering from serious and sometimes embarrassing diseases than to force them to discuss their problems in front of a group of their peers, but this is the sort of thing that happens when the good of collective matters more than the rights of the individual.

This isn’t the only controversy facing the NHS, either. For several years, critics of the health care system have complained that it’s wildly underfunded and, as a result, suffering from long wait times for patients. Over the past eight years, NHS’s funding has increased by just 1 percent per year, significantly lower than the NHS’s 3.9 percent average annual increase occurring since 1955.

According to a June report by The Guardian (U.K.), “Simon Stevens, the chief executive of NHS England, told ministers the NHS needed to start receiving 4%-a-year budget increases as soon as possible, given the service’s increasing inability to meet key patient treatment waiting times and desire to make real progress in key areas, such as cancer, mental health and primary care.”

No one denies the United States has plenty of health care problems of its own, and the Obamacare model imposed on Americans by the Democrats in 2010 has only made things significantly worse. But the solutions to those flaws in our current system can’t be found in the government-controlled systems of Canada or Europe because government almost always creates more problems than it solves, with very few exceptions.

This isn’t revolutionary thinking. Why would we put the same people who can’t operate the Postal Service, Amtrak, or the DMV in charge of the health care system? If it can’t figure out how to deliver letters and packages without running massive deficits, why would we expect it to run the much more complicated health care system effectively?