Judge Andrew Napolitano
|
Posted: Jul 05, 2018 12:01 AM
Share   Tweet
The opinions expressed by columnists are their own and do not necessarily represent the views of Townhall.com. 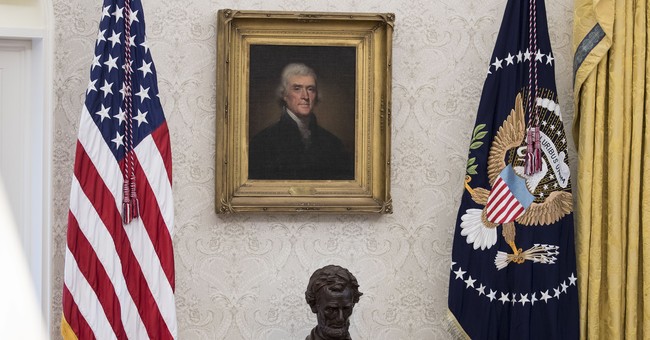 The Declaration of Independence - which was signed on July 3, 1776, for public release on July 4 - was Thomas Jefferson's masterpiece. Jefferson himself wrote much about the declaration in the 50 years that followed.

Not the least of what he wrote offered his view that the declaration and the values that it articulated were truly radical - meaning they reflected 180-degree changes at the very core of societal attitudes in America. The idea that farmers and merchants and lawyers could secede from a kingdom and fight and win a war against the king's army was the end result of the multigenerational movement that was articulated in the declaration.

The two central values of the declaration are the origins of human liberty and the legitimacy of popular government.

Even those who question or reject the existence of the Creator -- was Jefferson himself among them? -- can embrace natural rights, because they can accept that our exercise of human reason leads us all to make similar claims. These claims -- free speech, free association, free exercise or non-exercise of religion, self-defense, privacy, and fairness, to name a few -- are rights that we all exercise without giving a second thought to the fact that they are natural and come from within us.

The view of the individual as the repository of natural rights was not accepted by any governments in 1776. In fact, all rejected it and used violence to suppress it. To the minds of those in government in the mid-18th century, the king was divine and could do no wrong, and parliament existed not as the people's representatives but to help the king raise money and to give him a read on the pulse of landowners and nobility.

Jefferson and his colleagues had no difficulty breaking from this type of ancient regime. Unlike the French, who destroyed their monarchy, the American colonists seceded from theirs -- and they did so embracing natural rights. Regrettably, they did not recognize natural rights for African slaves or for women. We all know and profoundly lament the sorry history of those errors.

The idea that each human being possesses inherent natural rights by virtue of one's humanity is not just an academic argument. It has real-life consequences, which Jefferson recognized. Those consequences are implicated when government seeks to curtail rights for what it claims is the protection of another's individual rights, the common good or the good of the government itself.

Surrendering rights is also implicated in the second radical idea that underscores the Declaration of Independence. It is the concept that no government is valid unless it enjoys the consent of the governed. This, too, was unheard of in 1776, because British kings did not claim consent of the governed as the basis for legitimacy.

Yet consent of the governed is perfectly consistent with natural law. Under natural law, what is yours is yours and what is mine is mine. If I attempt to take your land or car or cellphone, you can stop me, either directly or through the government we have both consented to. If one of us has not consented to the government's existence, it can still enforce natural rights as the agent of the person whose rights are being violated -- just as it does for bank depositors when it captures a bank robber.

This idea of consent of the governed was a serious issue in the days and years following July 4, 1776, because about one-third of the adults living in the United States in the last quarter of the 18th century remained loyal to the king of England after the Revolution, and they did not consent to the new popular form of government that took the British government's place. The new government was thrust upon them without their consent.

The last letter Jefferson wrote was to his enemy-turned-friend John Adams, in anticipation of the 50th anniversary of the declaration - a day on which both Jefferson and Adams would die. In that letter, Jefferson argued that the greatest achievement of the declaration was its arousing men to burst free from the chains imposed upon them by superstition and myth by bringing about a recognition of their individual rights and an embrace of self-government.

Today the Jeffersonian ideals of individual natural rights and government's legitimacy's being conditioned upon the individual consent of the governed have themselves become myths.

In Jefferson's day, the voters knew all that the government did, and it knew nothing about them. Today government operates largely in secrecy, and it knows our every move and captures our every communication.