Judge Andrew Napolitano
|
Posted: Mar 23, 2017 12:01 AM
Share   Tweet
The opinions expressed by columnists are their own and do not necessarily represent the views of Townhall.com. 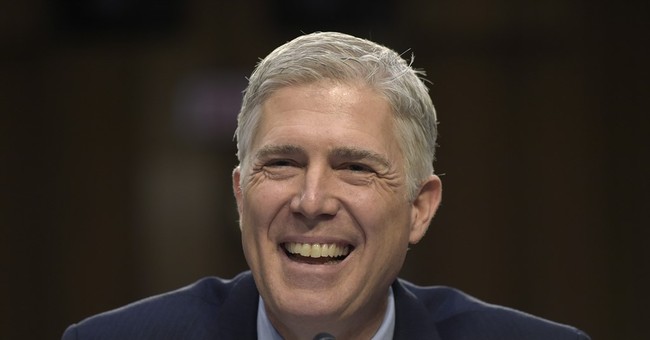 I have spent this past week watching the Senate Judiciary Committee interrogating U.S. Circuit Judge Neil Gorsuch. Judge Gorsuch is President Donald Trump's nominee to fill the vacancy on the U.S. Supreme Court. The vacancy was created by the death of Justice Antonin Scalia more than 13 months ago. The Supreme Court is currently generally divided between four liberals and four conservatives. As a justice, Gorsuch would probably break many ideological ties.

During the hearings, Republican senators are doing their best to associate Judge Gorsuch with the popular-in-death Justice Scalia, and Democratic senators are doing their best to try to pin down Gorsuch by making him commit publicly to positions on hot-button issues, such as abortion, gun rights and the use of unrestricted money in political campaigns. Gorsuch has accepted the Republican sobriquets and declined to answer Democratic inquiries with specificity. So, are the hearings of any real value?

Prior to the partisan efforts to block the nominations of the late Judge Robert Bork and now-Justice Clarence Thomas to the Supreme Court, the Senate's "advice and consent" role was mainly limited to a cursory examination of a nominee's qualifications for office. The Bork hearings succeeded in derailing his nomination by portraying his philosophical views as outside the mainstream of legal thought. The Thomas hearings, which failed to block the nomination, centered on the nominee's alleged personal shortcomings, which were directly challenged and mainly refuted.

My point here is that since these two hearings in 1987 and 1991, the Senate Judiciary Committee has felt unleashed to probe and prod into any area it sees fit, and the nominees have become unleashed to answer only the questions that they think will advance their nominations.

In the Gorsuch hearings this week, the nominee has argued that should he commit to certain positions on issues, it would not be fair to litigants who might come before him as a circuit judge if his nomination were not to be confirmed or before him in the Supreme Court if it were, as those litigants would have a proper belief that he prejudged their cases. "It would be grossly improper," he argued, for him to commit in advance to how he'd vote on any issue. He's correct.

It should come as no surprise that Gorsuch is a traditionalist. The folks who offered his candidacy to the president -- and I played a small role in that process -- spent weeks examining all his public writings, as well as his speeches and lectures, so as to enable them to conclude safely that his 10-year track record as an appellate judge could fairly be a barometer of his likely behavior as a Supreme Court justice. In the process of that examination, the researchers found many similarities in ideas, tone, attitudes and word choice to Justice Scalia.

The essence of that similarity is an idea called originalism. Though there are many variants of originalism, it generally advances the idea that the meaning of the Constitution was fixed at the time it was ratified and therefore its words mean the same today as they did to those who ratified it; and the same is the case for its 27 amendments.

This fidelity to original public understanding drives judges to the text of the Constitution and the laws -- not the principles that underlie the text, not the politics that produced the text, not the social ills the text seeks to cure but the words chosen by the drafters of the Constitution or of a statute, as the case may be. This is not just an obscure academic argument. Originalism, if followed religiously, leaves judges and justices to the narrow role of interpreting the plain text of the Constitution or laws as they were understood when enacted, irrespective of the consequences.

Originalists believe that social progress and new legal structures should come about by the acts of Congress and the president, who are elected for that purpose, rather than by the rulings of unelected, unaccountable judges. If every judge were an originalist, the effect would be that much wonderful social progress in human affairs that could come about through the decisions of courageous jurists -- such as public school desegregation and personal privacy and mobility in years past -- might not come about.

Yet originalists argue that federal jurists are the least equipped to advance social progress; they are often old, are never elected and have no accountability to the public.

Thus, it is on this philosophical fulcrum, more than on any other, that senators should examine Judge Gorsuch's thinking. In this context, they can also ask him whether our rights come from the government or from our humanity. They can ask how he views fundamental liberties. Can the court pick and choose which rights are highly protected from government interference and thus are difficult for the government to regulate and which are not? If privacy and travel -- neither of which is mentioned by name in the Constitution -- are fundamental liberties, why isn't freedom of contract, which is mentioned by name?

On these issues alone -- originalism and fundamental liberties -- the senators could find from his answers a blueprint to his thinking, and Judge Gorsuch could reply in meaningful ways without prejudging any cases.

But the Senate is a political body, and its members are politicians. One of the reasons Justice Scalia gave for rejecting as an interpretive tool the statements made by members of Congress when they passed any legislation under scrutiny is the truism that politicians have only one goal in their work, no matter what they are saying -- to get re-elected. The senators examining Judge Gorsuch are probably more concerned with that than with doing the right thing for the court. I hope that in this respect, I am wrong, as I have been before.