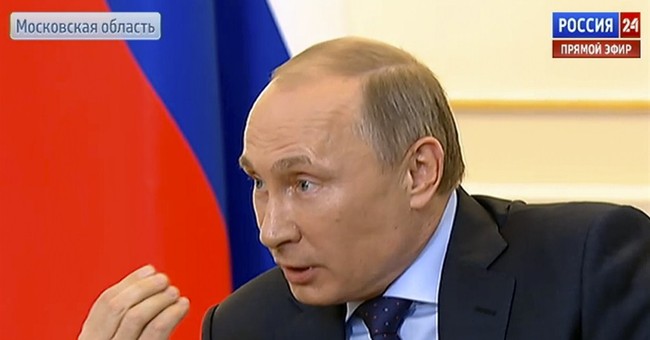 What happens when the United States government participates meaningfully in toppling foreign governments in the name of spreading democracy? That behavior usually results in unintended consequences and often produces disasters.

When the United States invaded Iraq in 2003, initially to search for weapons of mass destruction that we now know the Bush administration knew did not exist there, and eventually for regime change, the U.S. succeeded in changing profoundly the Iraqi government. But in the process, we lost 4,500 American troops, suffered 45,000 substantial injuries, borrowed and spent and have not paid back more than $2 trillion, caused the deaths of 650,000 Iraqis, displaced 2.5 million Iraqis, and unleashed into Iraq our public enemy, al-Qaida. Al-Qaida was not in Iraq before we invaded. Today, it controls one-third of that now unstable country.

In 2010, President Obama decided he no longer liked America's favorite Middle Eastern dictator, President Hosni Mubarak of Egypt, even though he and his four immediate predecessors gave the Mubarak government about $4 billion annually. So our agents fomented revolution in the streets while Obama suggested openly that it was time for Mubarak to leave office. Then the hoped-for and promised free elections took place, and avowed enemy of the West and Islamic fanatic Mohammed Morsi became the first popularly elected president in Egyptian history. Then the U.S. decided it did not want him in power no matter the lawfulness and moral legitimacy of his election, and so the Obama administration encouraged a military coup.

Morsi was arrested by his own military commanders and is currently on trial for permitting his soldiers under those same commanders to kill nine people who were resisting the coup, even though the American-backed military plotters -- who now rule Egypt and are prosecuting Morsi -- have killed thousands of Egyptian civilians who attempted to resist the removal of Morsi from office. The result is a military dictatorship and murderous resistance far more odious than in the Mubarak years.

And in Ukraine in 2004, the Bush administration fomented the so-called Orange Revolution. This, too, was done by our diplomats and intelligence community, whose agents agitated demonstrators in the streets and liberally distributed American dollars to them. This resulted in a free election, which resulted in subsequent free elections, until the most recent of those produced a president who -- as an ex-communist -- was more drawn to Russia than to the U.S. or Europe.

When the Ukraine government needed cash and Russia offered it a better deal than the European Union, our imperial diplomats and lawless intelligence gurus were embarrassed. So, the U.S. fomented another revolution in the streets of Kiev. One of our diplomats, Victoria Nuland, acknowledged as much in a tapped and taped (complete with expletives) and eventually viral cellphone conversation. Then, Viktor Yanukovich, the popularly and lawfully elected Ukraine president, was toppled and fled to Moscow. The new unelected Ukraine president has received American recognition and help. Earlier this week, the U.S. offered him $1 billion in immediate cash.

Enter Vladimir Putin. He is the popularly elected president of Russia who has designs on reconstituting the old Soviet Union. Putin is also an ex-KGB agent; he is a torturer, a murderer, a tyrant and a monster. He often has lamented the demise of the former Soviet Union. Ukraine was a part of that union until the evil empire dissolved in 1991. It was the most economically productive part of that union. Today it enjoys a mostly free market and is highly entrepreneurial, though partly a welfare state. Roughly two-thirds of Ukraine identifies with Europe and one-third with Russia.

After Yanukovich showed up at Putin's doorstep in Moscow, Putin flexed his muscles by sending 16,000 Russian troops, in uniforms without insignias and wearing black masks (you cannot make this up), over the border to occupy Crimea, a province of Ukraine, which had been part of Russia and the Soviet Union until 1954.

Putin's invasion is profoundly unlawful, as it constitutes the introduction of military troops into a sovereign territory without governmental invitation or consent, and the absence of identifying insignia puts this invasion outside the protections of the Geneva Conventions and the rules of war. Hence the Russian troops are legally fair game for Ukrainian troops and civilian militias. But don't expect that to happen. Russia has two times the number of tanks as Ukraine, 10 times the troops and 12 times the air power.

As well, don't expect the Russians to leave. Most residents of Crimea are Russian speaking and actually welcome their invaders (again, you cannot make this up). And Putin's track record in foreign incursions shows a pattern of retaining conquered territories. When he invaded Georgia in 2008, he kept two provinces, which are still occupied with more than 40,000 idle and costly Russian troops.

The U.S. and Europe are in no position to resist the Russian invasion, nor should they. Europe receives roughly 30 percent of its oil, natural gas and coal from Russia. If the U.S. tightens the economic screws on Russia, American banks will suffer, and the Russian oligarchs and Russian people will suffer, but no group will suffer as much as Europeans who have grown dependent on Russian fuel. And Putin is unmoved by personal embarrassment or human suffering.

The stated purpose of the Russian invasion is to protect predominantly ethnic Russians in Crimea from the mob-induced fate of Yanukovich. At first blush, this seems nonsense. But consider the view from Moscow of the American-induced expulsion of the popularly elected and Russian-oriented Ukraine president. And then consider this: What would the U.S. do if the Chinese had fomented a revolution in Mexico and installed a Chinese-friendly government there that solicited Chinese loans and invited the Chinese to help govern? Would the U.S. protect English-speaking American-friendly folks along the Texas-Mexico border?

And how is anyone in the U.S. harmed by Putin's lawlessness? Should the United Sates government roam the world seeking monsters to slay, or should it learn from its recent grave mistakes? Nearly two centuries ago, President John Quincy Adams warned his successors against the foreign policies that would be manifest in the Bush/Obama years. "Americans should not go abroad to slay dragons that they do not understand in the name of spreading democracy."

But the government is an old dog that cannot learn new tricks.