The Gaslighting of the American People

Josh Hammer
|
Posted: Nov 13, 2020 12:01 AM
Share   Tweet
The opinions expressed by columnists are their own and do not necessarily represent the views of Townhall.com. 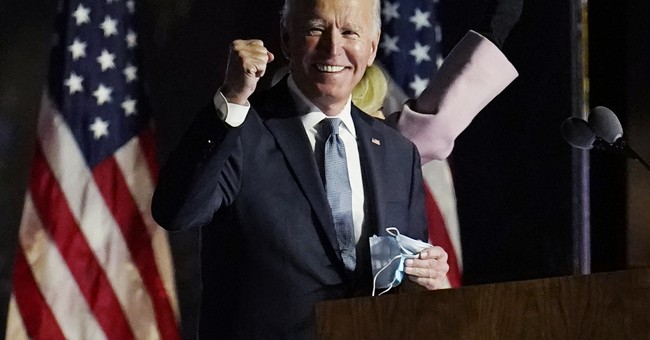 Members of the Electoral College do not formally congregate to elect the next president of the United States until Dec. 14, but as far as the media, Hollywood and the Fortune 500 are concerned, former Vice President Joe Biden is already president-elect. This, notwithstanding the fact that President Donald Trump's reelection campaign, having alleged various abnormalities and irregularities in this unusual midpandemic voting process, is currently pursuing legal recourse across myriad closely contested battleground states.

The Constitution, of course, does not specify the media, Hollywood and the Fortune 500 as the determiners of our presidential election. We have a rule of law, and we have specific legally prescribed mechanisms and deadlines in place. But supporters of Trump are nonetheless being told to sit down, shut up and not ask any questions. Just submit to your new ruler, we are told by supercilious elites.

But Trump supporters might be readily forgiven for not submitting to their prospective new rulers with alacrity. In fact, the pansocietal effort we are now watching unfold before our eyes is the culmination of four years of a sustained, systemic gaslighting of the American people.

It is no small irony that those now united in bellowing from the hilltops about the dangers of not accepting election outcomes and delegitimizing election results are the same people who never accepted the legitimacy of Trump's presidency to begin with. Who can forget how, on the day after Inauguration Day 2017, leftists followed the lead of Jew-haters such as Linda Sarsour and Tamika Mallory in planning a rival event, intended to overshadow the inauguration, which was the first Women's March? Who can forget how leftists have invariably clamored about how Trump is a nefarious Russian agent, a Manchurian candidate and a Vladimir Putin stooge, who was only "elected" due to a biased FBI director's "October surprise" announcement (laughable) and Russian bots manipulating voters on social media (even more laughable)?

For the past four years, leftist activists and the Democratic Party have tried their very best to out Trump in any way possible, including hallucinogenic dreams of a 25th Amendment invocation and a totally unhinged, baseless and petty impeachment push. They have stymied the administration's attempts to effectuate substantive good governance initiatives through a veritable hodgepodge of obstructive probes, investigations and manufactured scandals. The most prominent of these, the Russiagate collusion hoax, cast a media frenzy-driven pall over the first two years of the administration and ended up as a complete bust. Democrats' risible impeachment push, based on a brief phone call between Trump and the Ukrainian premier, was so quickly discredited that it became a total nonissue -- if anything, an affirmative hindrance for Democrats -- in the 2020 election.

Meanwhile, the media at every turn has sought to portray Trump as a racist white supremacist reprobate, notwithstanding the fact he has an Orthodox Jewish daughter and Jewish grandchildren. The media and Democrats have repeatedly lied about what Trump did and did not say after the violence in Charlottesville, Virginia, in August 2017, and have routinely lumped together all Trump supporters as a bunch of backwoods yahoos -- "deplorables," to borrow Hillary Clinton's infamous phrasing -- who pine for those ostensible halcyon days of (actual) systemic racism pervading the nation. The media has often railed against the alleged violent tendencies of gun-toting Trump supporters, but as the anarchy of Portland, Oregon, helped make clear a few months ago, the most conspicuous threat in this nation is that posed to conservatives by the Democratic Party's rabid, vindictive antifa-Black Lives Matter wing.

But it gets even worse. In this unprecedented of elections, many states illegally changed their basic election/voting-related laws midstream -- and invariably had those illicit attempts to deprive state legislatures of their plenary power over election regulation bestowed legitimacy by state and federal courts alike. Democrats and Never-Trump Republicans hosted war game exercises where they mused longingly about a military coup. The Democratic attorney general in a key swing state, Pennsylvania, boasted before Election Day about how Biden would surely prevail.

The political polling industry, which apparently failed to correct any of its errors from the 2016 election, was so catastrophically off that one must seriously wonder whether any pollsters may have deliberately misled prospective voters in a psychological attempt to artificially depress GOP turnout. In Wisconsin, which Biden ultimately carried by less than 1%, the ABC/Washington Post poll less than a week before election day had Biden up a whopping 17 points. It is difficult to contemplate how a pollster can be that off the mark.

And now, after four years of relentlessly fighting a president they never accepted, engaging in the most sordid of unsubstantiated character assassination campaigns against that president's second Supreme Court nominee, and peculiarly low rejection rates for mail-in ballots after much higher rejection rates in the primaries, while the president pursues the remedial legal actions to which he is entitled, they have the temerity to tell us all to pipe down and get on board with calling Biden "president-elect."

Free republics do not long survive in a state like this -- not when the entire country's ruling class, and all its sundry leading institutions, are in a de facto state of war with half of the citizenry. Stop gaslighting us -- and do it now.