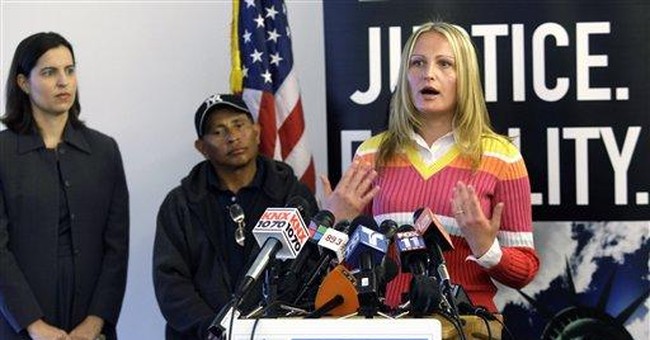 General Douglas MacArthur famously noted that "old soldiers never die; they just fade away." Sometimes, though, before they fade away, they get angry. And a case being argued in the Supreme Court Wednesday has veterans seeing red, white, and blue-but mostly red.

Unsurprisingly, the case will go to the court courtesy of an ACLU lawsuit.

The object at the center of the case is a small, unadorned cross sitting in a remote part of the Mojave Desert Preserve in Southeast California. A veterans' group erected this memorial cross on private land in 1934 to honor the dead of all wars.

Driving by this secluded location today, however, you'll see a curious-looking plywood box hiding the memorial, the way someone might cover a condemned building. That box is there because one person filed suit, with the help of ACLU attorneys, claiming he was "offended" by the memorial cross. One offended man has somehow trumped the wishes of millions of veterans.

If a federal appeals court has its way, the box and the memorial soon will be gone forever. Fortunately, the U.S. Supreme Court will review the ruling at the request of the Department of Justice, and in this case, millions of veterans, speaking through The American Legion and Veterans of Foreign Wars, have added their voices in support. In fact, the American Legion Department of California and the Alliance Defense Fund have joined forces and filed a brief in support of the Department of Justice, asking the Supreme Court to dismiss the lawsuit.

The U.S. Government recently acquired the land on which the memorial sits when the site became part of the Mojave Federal Preserve. After the ACLU lawsuit was filed, Congress worked with veterans to honor their wishes and preserve the monument. It took an act of Congress to rescue the memorial from a federal court decision ordering its destruction. As part of its action, Congress voted to give an acre of land containing the memorial back to the veterans who maintained it for decades, in exchange for five acres deeded to the government. Giving up one acre to get five, and honoring veterans in the process, seemed like a good deal.

But not to the ACLU and its "offended" client.

To them, even this reasonable arrangement was intolerable. They pressed forward with their lawsuit saying the memorial must not be allowed to stand and the land transfer must be overturned; their hostility to a passive symbol of this sort is simply too great.

However, as bad as this case is, veterans know much more is at stake in this case than one memorial in the California desert.

Military memorials commonly use the cross as part of a display to honor those who paid the ultimate sacrifice to defend our nation. While the cross is a religious symbol, the military has also used it as a symbol of courage, sacrifice, and honor. For example, the nation's second highest military award is the Distinguished Service Cross. Visitors to the hallowed grounds of Arlington National Cemetery can see several commemorative crosses, like the Canadian Cross of Sacrifice, a gift from former Canadian Prime Minister MacKenzie King that was dedicated at Arlington in 1927.

If the Supreme Court does not overturn the appeals court, religious symbols that have graced monuments for many decades may become a thing of the past. Memorials to military veterans, police officers, firefighters, and other heroes will be whitewashed, covered up, or torn out to appease the politically correct agenda of intolerant extremists.

Veterans are being asked to surrender to the thin-skinned sensitivity of an individual who has managed to be offended by a small memorial, literally in the middle of a desert. Is this truly an offense worthy of a lawsuit? Apparently, the fanatical agenda of the ACLU to expunge religious symbols has really come this far, and now the Supreme Court has the opportunity to weigh in.

One person's offense should not diminish the sacrifice made by America's heroes and their families. Why would we not wish to allow the men and women who have served and defended this nation to choose how they wish to honor their dead? Even if old soldiers "fade away," their memory should not.

Reagan McCarthy
Trump Says If Biden or Harris Won't Visit the Border to See Their Crisis, Then He Will
Julio Rosas

A Group Of Parents Sent Their Kids' Face Masks to A Lab for Analysis. Here's What They Found
Townhall
'Why would Trump do this?' Joe Biden smiles as US journalists yell at and fight with each other before getting shoved by Russian security [pic, video]
Twitchy
Tucker Carlson Raises a Very Serious Alarm Bell About Ashli Babbitt's Murder and the Enemy Within
Redstate
The Morning Briefing: The Chrissy Teigen Cancel Choir Is Singing a Beautiful Tune
PJ Media