Jonathan Williams
|
Posted: Nov 11, 2016 10:11 AM
Share   Tweet
The opinions expressed by columnists are their own and do not necessarily represent the views of Townhall.com. 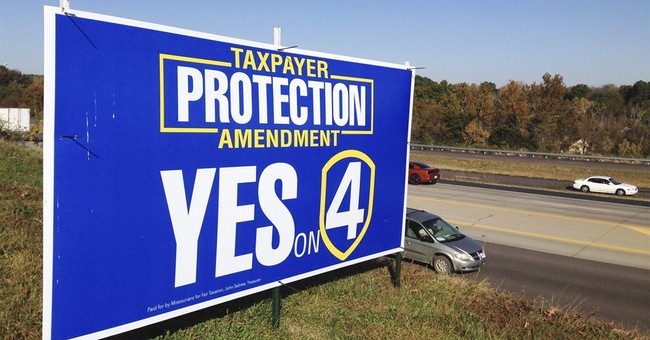 Plenty of ink has been spilled discussing the national races and political control of Congress this week. However, various measures decided by voters at the state level this week could arguably have more immediate impact on the lives of Americans. Here are a few initial thoughts on some of the most significant tax policy measures.

One of the most damaging tax increase proposals suffered a crushing defeat in liberal Oregon by a 41-59 percent margin. Measure 97 would have enacted a new 2.5 percent gross receipts tax on businesses with significant sales in the state. As ALEC has noted many times in the past, businesses don’t pay taxes, people do. This proposed tax increase would have raised taxes on hardworking taxpayers by an estimated $6 billion and grown state government by 25 percent over a two-year budget cycle. With Oregon already ranking a dismal 41 in the Rich States, Poor States: ALEC-Laffer State Economic Competitiveness Index, taxpayers dodged a major bullet with the defeat of Measure 97.

Moving on to several discouraging outcomes for taxpayers: California voters chose to keep the nation’s highest personal income tax rate of 13.3 percent, which was scheduled to be temporary when originally passed. California voters also approved a significant increase of $2.00 per pack in the state’s cigarette tax. A previous ALEC report outlined the many public policy problems with discriminatory taxation like this.

In Maine, proponents of a measure (Question 2) to create a “surcharge” and increase the personal income tax by three full percentage points have declared victory. The vote total appears to be razor tight, currently at 50-50. A previous analysis from the ALEC Center for State Fiscal Reform showed what the approval of Question 2 would mean for economic competitiveness in Maine:

“Passage of the income tax increase would push the state from 38 to 44 in economic outlook, putting Maine back into company with uncompetitive and opportunity-starved states like New Jersey, New York, Connecticut and California. The measure will not only affect individuals reporting income in the state, but also many small businesses, which are set up as pass-through entities whereby profits are passed on to individuals as income. According to the Tax Foundation, pass-through businesses now earn more net business income than C-corporations, and in Maine alone, an estimated 11,450 businesses will be harmed by the measure.”

Unfortunately for the hardworking taxpayers of Maine, Question 2 will lead to a reversal of several years of economic progress and likely move the state back into the bottom 10 for economic outlook.

On a positive note for taxpayers, many other measures to increase taxes across the states failed this week:

While most of the attention this week has been focused on national election results, the ballot measures decided this week at the ballot box will have a lasting impact on hardworking taxpayers across the nation. Fortunately, outside of painful new taxes in California and Maine, taxpayers can generally be thankful for many victories on significant state tax issues.