Will the Real Nazi Antisemites Please Stand Up

Jonathan Feldstein
|
Posted: May 03, 2022 8:54 AM
Share   Tweet
The opinions expressed by columnists are their own and do not necessarily represent the views of Townhall.com. 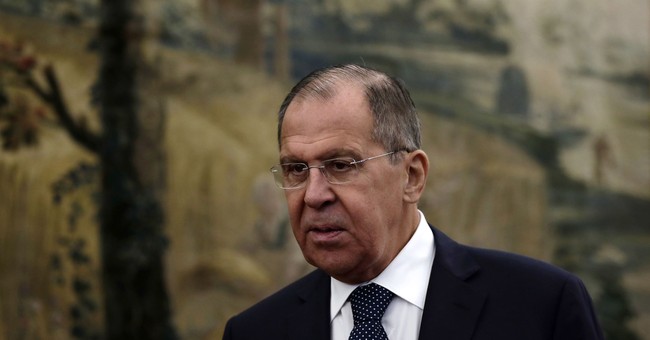 Russian Foreign Minister Sergei Lavrov has demonstrated that he seems to be both. In comments to an Italian news agency, Lavrov spoke about Russia’s invasion of Ukraine, doubling down and adding fuel to the fire of allegations of the invasion being to eliminate Nazis from Ukraine.

Lavrov started off by calling Ukrainian President Volodymyr Zelensky a Nazi. It’s important to note that Zelensky himself is Jewish. Then, Lavrov went over the top.  He “proved” his statement by noting (incorrectly) that even Hitler had Jewish blood, as if to justify Russia’s invasion and his penultimate slander, “For a long time now we’ve been hearing the wise Jewish people say that the biggest antisemites are the Jews themselves.”

By Lavrov’s antisemitic logic, if Hitler had Jewish blood and defined Naziism, then surely Zelensky who is a Jew is also a Nazi.

Ah, yes.  The cabal of “wise Jewish people” who say that the biggest antisemites are Jewish.   It reminds me of a “rule” in my fraternity where one could say anything about anyone as long as it was prefaced by, “I heard that.”  Except that Lavrov is not a stupid college student, and he happened to violate some of the most egregious forms of antisemitic libels.

Deliberately or not, Lavrov unmasked a huge history of antisemitism that’s a long part of Russian history, including in Ukraine.  Not that anyone who knows their history doesn’t know that under the Czars and under the Soviets, this was a part of the world most hostile and dangerous for Jews to live, and easy to be persecuted and slaughtered.  It seems that the slogan attributed to the movement to free Jews from the Soviet Union remains true: “Russia is not healthy for Jews and other living things.”

The Czars and Soviet leaders from Stalin through Andropov must be laughing in their graves, beaming with pride to see their antisemitic tradition being carried on to the next generation.

Under the Czars, Jews were largely confined to what’s known as “the pale of settlement,” parts of southern Russia, Ukraine, and other future/former Soviet provinces.  It was like a ghetto, for an entire region.  It didn’t limit antisemitism in the rest of the Russian empire, but just made it easier for pogroms and other forms of persecution having the Jews concentrated together.  Whenever possible, Jews would flee. But its not like they could just get a ticket on a train or boat to safety.  That’s why so many were murdered, even before the actual Nazis arrived.

Hundreds of thousands of Jews (or more) were murdered in Russia and Ukraine under the Nazis, often with the help of their Russian and especially Ukrainian neighbors who willingly participated as eager collaborators.  Jews still couldn’t leave, though after the war were able to migrate to Soviet cities outside the pale.

While “officially” the USSR was anti-antisemitic, that was just a ruse.   Jews were identified as such in their Soviet ID card which made discrimination and quotas easy to enforce, even if “officially” such discrimination was anti-Soviet.  Jews were prevented from practicing their faith, studying or publishing in Hebrew, and victims of some of the most outrageous civil crimes just for being Jews.  Soviet Jews could not leave, and those who had the audacity to apply to the Soviets for permission to do so were subject to additional persecution, legal threats, and imprisonment.

Stalin’s persecution of the Jews was infamous as he launched the notorious antisemitic purge through the “Doctors Plot,” along with deporting Jews to Siberia.  Jews grew up under Stalin knowing that they were not only not safe physically, but that any neighbor could turn them in on any number of trumped-up allegations, for any reason, including that antisemitism was just acceptable.

Zelensky is not a Nazi, and he’s also not an antisemite.  However, being fair, his hands are not clean as he has stoked rudimentary antisemitism himself.  Applying a gross double standard, he has appealed to Israel and Jews through guilt, that we have a special obligation to defend Ukraine.  He’s used the absurd notion and lie that Ukrainians (always) defended Jews.  Being fully honest, minus a handful of Righteous Gentiles, nobody can ever say that about Ukraine and Ukrainians with a straight face.  But Zelensky did.

He also singles out Israel, albeit that Ukraine doesn’t have such a great voting record in international forums in support of Israel.  Double standard?  Zelensky gets away with it because he’s Jewish and seen as the underdog, defending his country under horrific attack.  Ukraine deserves support, despite but not because of their history vis-a-vis Israel and the Jews. His passive stoking of antisemitism is also part of the problem.

Yes, Jewish communities survived and established deep roots there, though there is no real positive history of or for the Jewish people in Ukraine. In fact, Ukraine is the geographic and national intersection where generations of conflict have arisen, whether about the Jews or, in most cases, not, and when conflict comes, the Jews get stuck in the middle, and then blamed and inevitably persecuted.

I’ve taken exception to the proclivity of some nonprofit efforts to raise money just for the 200,000 jews of Ukraine, less than five percent of the population.  The horrors and suffering for all 44 million Ukrainians are unspeakable.  Until now, the Jews have not been singled out per se, making them no better and no worse than all Ukrainians and, in my estimation, no more or less in need of unique support.