Jonathan Feldstein
|
Posted: Jan 19, 2021 9:28 AM
Share   Tweet
The opinions expressed by columnists are their own and do not necessarily represent the views of Townhall.com. 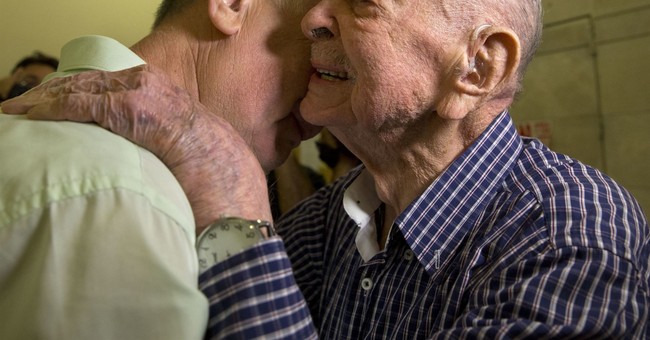 Just a year ago, Jerusalem was inundated by world leaders commemorating the 75th anniversary of the liberation of Auschwitz. At the time, it was announced that in Israel there were only 192,000 remaining Holocaust survivors, 15,000 fewer than the year before because of the high death rate among the aging survivors. At this rate, within 12 years, there will be no more living survivors among us.

By all accounts, the survivors’ situation has become much more perilous in the last year. The pandemic has increased isolation and fear, creating a level of trauma that most have not felt since they were young, and struggling with daily threats just to survive the Nazis and their collaborators. Though Israel leads the world in vaccination against COVID, many have died. It will take time before elderly survivors are able to return to life as it had been a year ago. For many, life will never be normal again, whatever “normal” is for a survivor.

In order to provide comfort and support, The Genesis 123 Foundation has launched “Hug a Holocaust Survivor,” a project to enable people around the world to send letters of encouragement, support, and unconditional love to survivors. The program focuses on Christian participants, as many fewer Christians have had any direct personal interaction with Jewish survivors. These letters will be an important respite for the survivors to let them know, perhaps more than ever before, that people around the world care. We all would hug them if we could, so this is a new and incredibly meaningful virtual hug program.

The letter writing idea was initiated with a church in Canada, whose elderly members are also suffering isolation and loneliness due to the pandemic. A website was launched where people are able to send their greetings electronically, and can be translated into Hebrew, Russian, and even Yiddish, no matter in what language they are sent. Participants are asked to make at least a $2 donation in lieu of postage, which will support programs that help Holocaust survivors.

With the mission to build bridges between Jews and Christians, there’s a critical added need that the Genesis 123 Foundation seeks to address. For most elderly Jewish survivors, the only experience they had with Christianity was negative, rife with hate and anti-Semitism. Jews in Europe grew up fearing the church.

“Hug a Holocaust Survivor” allows the healing of a rift for which many Christians today repent, given the hate and other crimes committed in the name of “the church,” and in the name of Jesus. Knowing that support is coming from Christians who love Israel and the Jewish people unconditionally will create a tremendous amount of healing.

Making the need for these letters and all forms of interaction all the more urgent, as Israel’s Holocaust survivors age, they have increased medical needs. For those living on fixed incomes, this strains their resources and makes many have to choose between basics such as medicine, heat, and food. This situation is exacerbated given that some 25 percent of survivors live below the poverty line.

Rev. Linda Chandler, a Genesis 123 Foundation board member who has studied the Holocaust, emphasized the urgency and imperative for Christians to support this appeal: “As Christians, it’s a sacred obligation to help care for and comfort these people who suffered unspeakable horrors as young men and women. As they age, and get sick and die at a faster rate, it is an opportunity that will only exist for a short time. Because so many suffered ‘church’ sponsored anti-Semitism, it’s an opportunity to show them true Christian love and repent for the sins of those who misrepresented our theology.

“Not only are survivors at a particularly high risk of contracting and succumbing to COVID as many have.  Survivors are prevented from the warm embrace of their own children and grandchildren as much of Israel has been living in lockdown.  The loneliness creates a level of PTSD that many have not felt in decades. Having visited survivors personally and seeing how important that is for them, our letters will help ease their loneliness and bless them.”

Materially, the many social services that Holocaust survivors receive are also threatened because of a lack of resources due to the pandemic’s economic devastation. Many of the programs for survivors are as much social as anything else. Now, most of these programs cannot take place in person which exacerbates the loneliness and suffering.

In response, proceeds of donations received will help provide for needs where they are not being met. Working with existing organizations in Israel to provide survivors with what they need, Genesis 123 is appealing for broad based participation.

Ultimately, while the “Hug a Holocaust Survivor” program addresses a very real and immediate need, the Genesis 123 Foundation has a bigger vision. It is calling upon churches, synagogues, and all religious institutions to join to partner for the long term. Plans are under way and everyone is encouraged to create the Holocaust Survivor Relief Fund that will provide for an array of survivors’ needs for the next 15 years. The vision is to provide any unmet basic needs from food and medicine, to heat and warm clothes, as long as there are living Holocaust survivors among us.

Rev. Chandler added, “We know that people are struggling now with their own needs. We are not asking for a specific commitment now, but we do call upon everyone to declare their intention to do so. God willing, we will show abundant love that will bless these precious people who suffered so much so they live their remaining years in comfort, without any fears. But minimally, we pray that everyone will send their letters today to bless them.”