Tel Aviv: The Foundation for the Building of Modern Israel

Jonathan Feldstein
|
Posted: Apr 16, 2020 10:44 AM
Share   Tweet
The opinions expressed by columnists are their own and do not necessarily represent the views of Townhall.com. 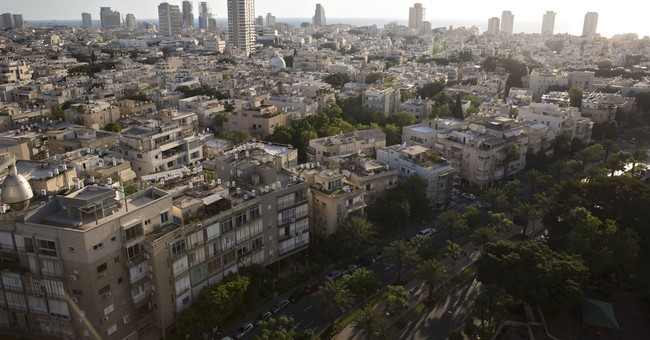 On the 20th of the Hebrew month of Nissan, in the year 5669 from Creation (corresponding with April 11, 1909), 66 families came together on the sand dunes north of the ancient biblical port city of Jaffa to establish the first modern Jewish city in the Land of Israel. They held a lottery to distribute the plots of land. Using seashells drawn out of a hat containing the names on white shells, and the lot number on black shells, thus they established the city.

Prior to this, following the first and second exiles, Jewish communities remained in Israel but had not established new cities until the first decade of the 20th century.

In the city’s charter they stated that they wanted Tel Aviv to be the New York of Israel, the gateway into the old-new land, borrowing the term from the early Zionist founding father and visionary Theodor Herzl’s book Altneuland (Old New Land). Herzl envisioned a modern society as the home of the Jewish people, based on Jewish history and as a refuge for Jews suffering anti-Semitism. He envisioned that that Israel would be a light and inspiration to the nations, a leader among equals.

Altneuland was translated to Hebrew with the name Tel Aviv, which literally means The Hill of Spring.  A “Tel” is an ancient archeological mound with layers of civilizations built upon one another, representing something very old and connected to the past. “Aviv,” spring, represents rebirth and renewal, a new beginning and vision for the future. “Tel Aviv” embodies building for the future on the foundation of the past.

Tel Aviv’s founders understood this was not just a fitting name, but a prophetic one. It was fitting that the city that most embodied this idea espoused by Herzl to revive Jewish life in the Land of Israel, becoming the first modern Jewish city after 2000 years of exile, was established by Jewish Immigrants from the four corners of the world speaking a common language, Hebrew, the language of our forefathers in our ancient homeland. Tel Aviv was the cornerstone for something new, modern, and vibrant, and was thus named after the book written by Herzl. It was all the more fitting given that this took place just five years after Herzl’s death at 44, giving life to his vision.

The site of the lottery took place on the plot that was allotted to the Dizengoff family, and where they ultimately built their home. The patriarch, Meir Dizengoff would become the first mayor of Tel Aviv. This was the cornerstone. Out of the sleepy barren sand dunes developed an incredible metropolis, a modern city built by Jews who had gathered from throughout the diaspora to rebuild their ancestral homeland.

Following the death of his beloved wife, Meir Dizengoff donated his home to the city to be used for the first art museum of Tel Aviv.  Today, that lot’s address now sits on the prestigious Rothschild Boulevard. The same building was used in 1948, as the site for the declaration of independence of the State of Israel. Another cornerstone of modern Israel. Today, it’s known as Independence Hall and open for tourists to learn about and experience the drama and emotion of Israel’s Declaration of Independence on May 14, 1948.

It is incredible to see how far Tel Aviv has come in such a short time. While Herzl was largely secular, even with him the idea of the Jewish rebirth of the Land of Israel was the fulfillment of God’s promise to restore His people to their Land.  As envisioned by Herzl, Tel Aviv was not just the kernel of the establishment of the first Jewish city in the Land of Israel in 2000 years, it was the foundation upon which his vision, and the hopes and prayers of the Jewish people for millennia, was built. Along with the rich Jewish history that connects the people to the Land inseparably, it is the foundation upon which the State of Israel and all its 9 million citizens thrive as a light unto the nations today.

Like New York, Tel Aviv is a vibrant city that never sleeps. It is a cultural, financial, business and tourist hub of the country, around which many adjacent cities have been developed making for one dense metropolitan area. Ground (and underground) work is being done to build Tel Aviv’s first light rail. Recently, a high-speed train was launched connecting Tel Aviv to Jerusalem, Israel’s capital, in just 40 minutes. Last year Tel Aviv hosted the worldwide Eurovision song competition and is recognized as a cosmopolitan city with an incredible mosaic of cultures, ethnicities, religions, cuisine, fashion, architecture, and art. It has an exciting night life, deep culture of sports with teams that compete internationally, and world class hotels, amazing beaches, and other attractions that make it a popular destination for Israelis and foreigners alike.

While Tel Aviv is on lockdown now like much of the rest of the world, this is an important and historic milestone to remember. When you’re able to make travel plans in the future, don’t miss the opportunity to come visit and experience Tel Aviv yourself soon. And while you’re at it, don’t forget Jerusalem, the Galilee, and countless other wondrous biblical and historical sites.