Supporting Christian Arabs in the IDF

Jonathan Feldstein
|
Posted: Feb 12, 2020 10:01 AM
Share   Tweet
The opinions expressed by columnists are their own and do not necessarily represent the views of Townhall.com. 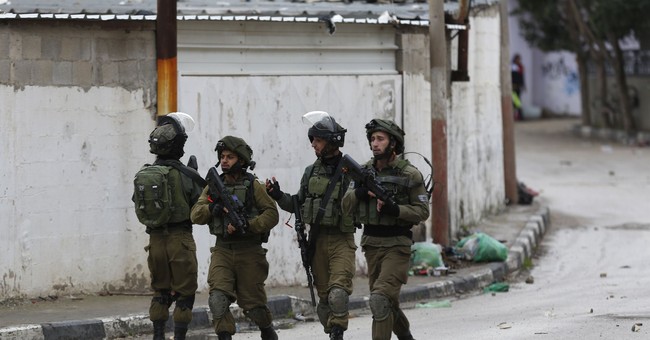 In a first-ever for Israel and the IDF, recently a Christian Israeli Arab enlisted an Israeli Air Force (IAF) cadet. Nationally, only 10 percent of cadets who begin the prestigious course graduate and earn their pilot wings. Yet, for this Christian Arab, whose name cannot be revealed for security reasons, just passing the rigorous medical, physical, and psychological tests is a historic achievement to be celebrated, with wide implications throughout Israeli society.

“This is a proud day for Israel’s army,” stated Dr. John A.I. Grossman, Chairman of LIBI, a welfare fund of the IDF. “While the international community continues to make false claims against Israel’s army, we see again and again how inclusive it really is.”

Only Israeli Jews, Druze, and Circassians are legally required to enlist in the IDF. Israeli Arabs, both Christians and Moslems, serve voluntarily. For years it's been common for Israeli Bedouin Arabs to serve. But in the past decade there’s been a growing trend of Christian Israeli Arabs to volunteer.

While many Arabs serve in elite combat and other units, recently Israel’s first Bedouin soldier was promoted to the rank of Colonel. Previously, Druze cadets completed the IAF cadets’ course and served as pilots.

While a growing trend in the past decade, Christian Arab enlistment faces many challenges. First Christian Arabs live in and among predominantly Moslem communities where there is often animosity towards anything “Israeli” or that represents the state and its institutions, and particularly the army.  Christian Arabs are motivated to serve as proud Israelis, a minority within a minority, and to distinguish themselves from the often-hostile environment and attitudes among Moslem Arabs. Christian Arabs are often treated as second class citizens and discriminated among the wider Moslem Arab community so placing themselves squarely in the corner of being proud Israeli citizens makes sense, albeit with the challenges. Some 20% of Israeli society is Arab and fewer than 10 percent are Christian.

Recently the Genesis 123 Foundation – Run for Zion, participated in a meeting among Christian Arabs who promote and participate in IDF service.  The organization, to remain anonymous because of pushback and threats it receives from Moslems, strives to integrate Christian Arabs into Israeli society via military service.  Their logo, overlaying a Star of David and a cross, draws fire among the wider Moslem Arab community “just” for use of the star as a symbol of the State. Yet the organizers and some 2000 Christian volunteers are determined to integrate and serve.

Challenges are not limited to within the Arab community.   With the relatively small portion of Arabs (Druze, Bedouin and Circassians) who have served for decades being a minority within a minority, there’s suspicion and lack of understanding among Jewish soldiers in meeting Christian Arabs for the first time.  Many Israelis don’t understand that Christian and Moslem Arabs are different, the challenges that Christians face within Moslem society, or the determination that they have to want to serve the State.

Underscoring the challenges and threats, the Israeli press has reported that a Christian Arab soldier received death threats on his Facebook page from Moslem Arabs who oppose Arabs serving in the IDF. They posted, “We know who you are, where you serve, and where your parents live. When you finish your patrol of the old city, we will wait for you at the mosque, where we will stab you.” Other Christian Arabs who volunteer for the military have faced incitement and harassment, including being called traitors.  One Christian combat soldier spoke to the Genesis 123 Foundation representatives about how since he enlisted, he lost most of his (Arab) friends.

Other challenges in Christian Arab service begin at home and continue beyond their military service.  Christian Arab parents, even those not hostile to Israel as a Jewish state, often have a hard time with the seeming paradox of their sons serving in an army that is in conflict with the wider Arab world.  They also are threatened, directly or indirectly, by their Moslem neighbors who oppose the normalization and integration into Israeli society that military service represents.  While many parents know that military service provides opportunities for social, educational, and economic mobility, they also know that challenges are inevitable.

For some older Christian Arab soldiers who are parents themselves, they and their children face discrimination within the wider Arab society.  In some instances, children of Christian Arab soldiers are barred from pre-school programs because their fathers are seen as an enemy.  In other cases, veterans who apply for jobs are blackballed in Arab companies.

Not only is the military good for the future of Arabs but having soldiers in the IDF fluent in Arabic is a significant perk. One Arab soldier noted that following basic training he served in Jenin, a hostile Palestinian Arab city. “You can imagine how surprised they were when I spoke Arabic with them,” he said.

Lone soldiers in Israel are typically young men and women who have immigrated on their own, or come from at-risk backgrounds where they don’t have family to support them. These cross an array of Israeli society including ultra-Orthodox men in whose communities military service in place of full-time Torah study is frowned upon.  Israel provides unique additional benefits to these soldiers. However Christian Arabs are typically not included among them.  For that reason, its all the more important to support them.

Arab Israelis make up around one-fifth of Israel’s population. Israeli society respects those who serve and provides broad social and economic benefits for veterans. Businesses often prefer hiring veterans both from a nationalist perspective and because of the valuable skills they develop in the army. Veterans are considered more responsible and mature, having a deeper bond with the Land and embrace the value of service to the country.

Author's Note: Join the Genesis 123 Foundation – Run for Zion to provide support for Christian Arabs who serve in the IDF and bless them. Visit https://www.runforzion.com/BlessingChristians to make a donation, or contact info@runforzion.com to see how you and your church can get involved more directly.