Jonathan Feldstein
|
Posted: Jan 19, 2019 12:01 AM
Share   Tweet
The opinions expressed by columnists are their own and do not necessarily represent the views of Townhall.com. 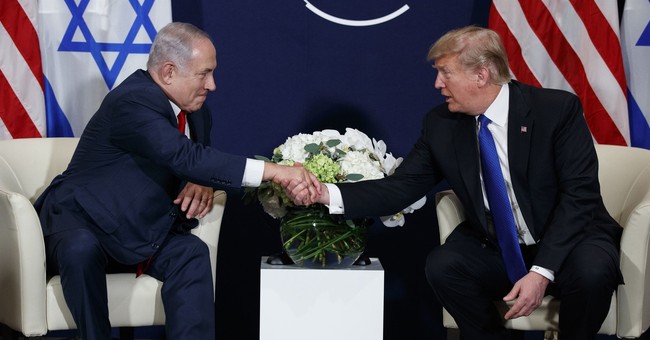 While ultimately the Israeli voters will make their choice on April 9, there are any number of external factors that could influence the election’s outcome, including things like a war and increased terror, the anticipated Trump Peace Plan, diplomatic achievements including high profile state visits, and countries moving their embassies could play significant factors, among others.

Regarding the Trump Peace Plan, it’s anticipated that they will wait until the summer, after Israel has formed a new government, to reveal it and make an effort to close “the deal of the century.” Not doing so will put Netanyahu in the position of supporting or rejecting it before the election.  It will also make a peace plan part of coalition agreement negotiations before he forms the next government, possibly including partners which would reject it.   Presenting the plan before the election would have a consequence, but not doing so is also deemed a wink to Netanyahu so as not to impede his being reelected and forming a new government.

As the incumbent, Netanyahu has the benefit of making and hosting international state visits between now and the election. It's anticipated he will do so, something he’s very good at, and from which he will derive the benefits of the achievements that go with them including trade, tourism, diplomacy, and more.  A few well-timed visits of heads of state to Israel (look toward Brazil and possibly an Arab leader) would underscore Netanyahu to be the statesman he is often credited as.

If a few more countries move their embassies to Jerusalem, this will be celebrated as a major achievement, again scoring points for Netanyahu. It will be hard for any other political party to counter this.

It’s not uncommon preceding an election to see a rise in terrorism where terror groups try to flex their muscle. This is as much related to Israeli domestic considerations as it is internal fighting and posturing among themselves. It’s also how terror groups assert their relevance and control over the populations they dominate. Specifically, fighting between respective Palestinian Arab terror groups Fatah and Hamas could also spill over and lead to Israel getting hit as Israel is the punching bag of both and fighting Israel is how they gain credibility within Palestinian Arab society.

The irony in this is that if they truly wanted peace they would refrain from terror because a rise in terror will typically see a tilt to the right in terms of the election. And it’s the Israeli left that is considered more likely to go out of its way to make peace, at least as part of its platform and campaign.

Security threats in Lebanon, Syria, and from Iran in particular could explode and lead to an all-out war, even if on a small scale. Likely that would tip the balance to the right. But if there were to be something cataclysmic, it could go the other way.

The ultimate game changer would be the appearance of a serious Palestinian Arab leader ready to sit down and make peace.  While it’s less likely that peace will break out than war will break out, were that to happen it would put Netanyahu, as the presumptive winner, on the spot to respond in kind.  That could alienate the more right-wing parties and faction within Likud, and put a wind in the sail of the center-left parties who tend to be viewed as pro-peace at the expense of defense.

Other things to look for

There is an interesting theory that the April 2019 election will become an Israeli version of midterm elections as in the U.S.  Of course, Israel has no such thing. While no Israeli government has served a full term in office due to a variety of reasons, the thinking goes that a 2019 vote is just a warm up for a 2020 vote. There are a few reasons why this might be the case.

If President Trump unveils his peace plan after the next government is formed, this could trigger new elections because certain likely partners in the new government will protest and or quit the coalition.   If that happens, and unless Netanyahu would be able to bring center-left parties into a new coalition to form a majority without elections, that could be inevitable. If the Trump Peace Plan were truly embraced by the Arab world, it might be hard for the center-left parties to stay out of the government and pass up a true chance for peace even with their animosity toward Netanyahu.

Netanyahu’s possible indictment could also play a factor.   There are many steps. First the attorney general would need to recommend an indictment. Then the Prime Minister would have time to have a hearing to confront the accusations and accusers, and only then a determination as to whether an indictment would be made.  Presumably much of this would take place after the April election.  Depending on the outcome and the nature of the charges against Netanyahu, there could be a demand that he resign.  This could be part of a plea deal with the attorney general, by popular demand by the nation, or a simple vote of no confidence where the coalition he puts together falls apart. In any case, if Netanyahu falls, there could be another election in 2020 both for his successor in the Likud party (several presumptive candidates are waiting to step in) and within the country.

What to Pray For

As to the question that friends have asked, what should you pray for? Like Israeli elections themselves, there are many dimensions to this.

First, I encourage you to pray that no matter the nastiness or the outcome, Israel’s enemies won’t be emboldened and feel there’s an opportunity to increase terror or engage in an all-out war. Please pray that Israel’s security, and resolve to confront its enemies remain strong.

Please pray that political divisiveness will not be worse than before, and that it will not create or widen rifts that already exist politically, and throughout Israeli society.  Even after a heated political campaign highlighting differences, Israeli leaders and the people who vote for them need to remain united.

Pray that a government will be formed, and its leaders will be called and inspired by God to lead and serve, and have the capacities to do so. Pray that He who governs the universe will enable the right people to serve at a time such as this.

Pray that God will continue and strengthen His divine protection over Israel as he has done since Abraham answered His call, both to keep Israel secure and to affirm His dominion in the world.

Pray that as unlikely as it was that 600,000 Jews in 1948 were able to form a country that thrives today with nearly 9 million, through His covering of Israel those who do not know Him will come to learn and worship His greatness.

Finally, please pray for the Arab and Lebanese people in particular. Pray that their leaders and the terrorists who have hijacked their societies are inspired to do good for their people and stop making the destruction of Israel their raison d’etre. Pray that God will change their hearts, both that they should know Him, and that they should bless His chosen people. And pray that if there is another war and Israel needs to respond in a devastating way to eliminate the storehouses of weapons hidden among civilian homes, schools, and mosques, that at least the outcome of this will be peace, as devastating as it may be. Pray that those who live above or next to these weapons will get out in time and even guide Israel to destroy the weapons and leave as many civilians unharmed as possible.

As complicated and even nasty as Israel’s election season is, the biblical significance is no less so. This is all about God’s restoration of the Jewish people to the Land He deeded Abraham and his decedents.  We have been through many incarnations of governments including kings, prophets, interim governments, and now seven decades of a thriving albeit complex democracy.

As detailed as this overview has been, there are numerous possible things that could happen, many noted above and many more not yet thought of, that could take place.  Each of these will have an immediate impact and ripple effect the nature of which cannot be fully projected.  Even if the outcome is as clear cut as explained in Part 1, one thing is certain, between now and April 9 it will be anything but boring.

Footnote: If you have thoughts or questions about things raised here, or things not mentioned at all, or wish to have updates as the campaign goes along, please feel free to reach out directly. If you’d like a list of relevant articles to add depth to your understanding, please let me know. I may not be able to answer all the questions in real time but will be glad to do so where I can and incorporate these into updates in the future. Thanks for your interest. firstpersonisrael@gmail.com

Jonathan Feldstein was born and educated in the U.S. and immigrated to Israel in 2004. He is married and the father of six and became a grandfather in 2018. Throughout his life and career, he has been blessed by the calling to fellowship with Christian supporters of Israel and serve as a bridge between Jews and Christians. He shares insights and experiences of living as an Orthodox Jew in Israel, writing for prominent Christian and conservative web sites and appearing on many Christian TV and radio programs.  He is the president of Run for Zion and the Genesis 123 Foundation. He can be reached at firstpersonisrael@gmail.com and via www.runforzion.com.