Jonathan Feldstein
|
Posted: May 27, 2018 12:01 AM
Share   Tweet
The opinions expressed by columnists are their own and do not necessarily represent the views of Townhall.com. 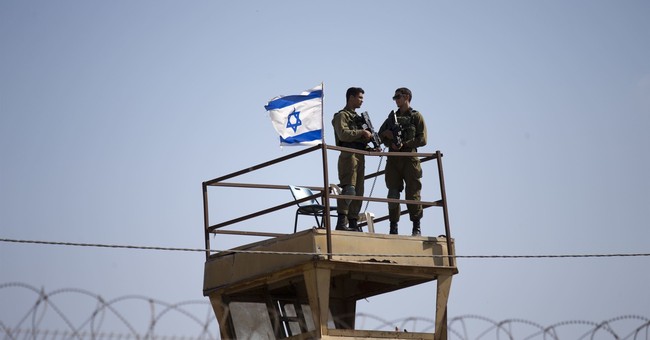 Each year I try to think of how to depict Memorial Day in Israel in a way that’s meaningful and juxtapose it in relation to how it’s observed in the US. Many thoughts race through my head. And each year I see Memorial Day through a different prism.

This year’s prism is through adopting a chayalboded, a lone soldier, who moved to Israel from the US alone. His home is our home, and while we don’t get to see him every day because he’s in the army, his experiences trickle down and provide a perspective through which we look at military service differently, with added appreciation and respect, particularly vis a vis someone who had other choices and who chose to make his life here, defending his people, far from his family.

I look at this Memorial Day through the prism of two soldiers who died in the past months. Neither of the ones who I am thinking of died in combat, but both were connected to people with whom we are close, so the grief trickles down immediately. There are no six degrees of separation.

One of these young men was the son of neighbors. After his death they described how the army was not only not to blame, but actually fulfilled and completed his life. In their grief, they were grateful.

As I get older and so do my friends, there are many more celebrations of our children joining the army, being recruited by elite units, getting promoted, and trying out for these elite units. Our children joining the army is a fact of life here, but the older you and your friends get, the more it becomes real, and the more you think about it with tremendous pride, but still thoughts of “what if” that we suppress.

This year, I know that by this time next year, my oldest son will be in the army. He wants to be in an elite combat unit. He’s preparing himself this year, physically and spiritually. I’m proud of him, his growth, his sense of commitment and responsibility. But part of me still thinks of him as the 5 year old boy who moved to Israel and who commented after the accidental death of another soldier from our community who was the older brother of his friend, “Don’t worry Ima and Abba, I’m not going to jump out of airplanes when I am in the army.”

This year, as every year, there was a minute of silence on the night ushering in Memorial Day, and two minutes the following morning. Both begin state memorial ceremonies that are televised natinoally, but thousands of other memorials take place. This year we memorialized 26,780 soldiers and terror victims who lost their lives. We try to comfort their families.

This year, as every year, TV and radio programming is all, and only, related to somber reflection. As sad as it is, it’s uplifting to hear stories of brave soldiers, tragedies of terror victims, and how they each lived valuable, meaningful, and impactful lives. It allows us to pay our respect by having a personal sense of the loss so many experience individually. But the longer I’m in Israel the more I am connected to personal stories of loss. During the long minutes of silence we observe, I think about the growing number of casualties, and the growing number of those to whom I am connected, at least indirectly.

During the televised ceremony at Israel’s national military cemetery, I was struck by three of the VIPs sitting next to one another. Prime Minister Netanyahu lost his brother in 1976 as a hero of Operation Entebbe, and is not just sensitive to, but a representative of, the bereaved families. He sat next to President Rivlin whose family has been in Israel for hundreds of years, an anchor of Jewish life in Israel. Next to the President was Speaker of the Knesset, Yuli Edelstein, who was a former Soviet Prisoner of Zion, and came to Israel after being released from a Soviet gulag in May 1987. In so many ways, they represent the mosaic of the people who live in Israel.

And in so many ways more than any other day of the year, Memorial Day is the day that brings Israelis together because it’s hard to find one who’s not been touched by tragedy, and certainly not to find one who doesn’t live in fear of it.

During that ceremony, the Prime Minister told a story of a man who lost his life in the War of Independence whose great grandson, from my community, was killed in our 2014 war in Gaza. It was sad enough then, that a young man my daughter’s age had just died in combat. Hearing that two generations of this family have been bereaved is shocking, and not something we wish to pass along.

The ceremony took place in a new memorial to the nearly 24,000 soldiers who have died, with the name of every one inscribed on a stone that make up the walls. I’d never seen the building before. What was shocking is that it was built with what appears to be at least another 24,000 blank stones, ready to be inscribed for future casualties. It’s hard to plan for that and yet remain hopeful. The reality is that this is our reality. It probably will be that way for the rest of my life, at least.

In Israel, unlike the US, it is not the start of summer holidays, sales, or a time to wish anyone a “Happy Memorial Day.” May your Memorial Day be one of meaningful reflection and appreciation.