In War, Time Is Less Expensive Than Human Life

Jonah Goldberg
|
Posted: Sep 13, 2019 12:01 AM
Share   Tweet
The opinions expressed by columnists are their own and do not necessarily represent the views of Townhall.com. 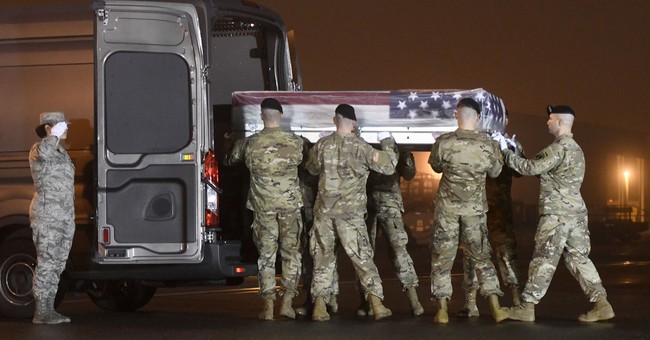 The drama leading up to and surrounding the 18th anniversary of the 9/11 terror attacks was an unfortunate distraction. President Trump invited the Taliban to meet at Camp David for "peace talks" -- against the wishes of the democratically elected government in Afghanistan and Trump's own national security adviser, John Bolton. The talks were canceled after a Taliban strike that killed one American. Bolton's job was canceled when he declined to defend the president's bad decision to invite the Taliban in the first place.

But behind the shouting there is a serious debate over what we should do about our presence in Afghanistan. One argument for pulling out is less serious than it appears at first blush: The war has gone on too long.

In the world of TV punditry, the claim that this is "America's longest war" often substitutes for an argument. It's what people mean when they say that America must stop engaging in "endless wars." Trump has said, "Great nations do not fight endless wars."

A pedant might note that history is replete with conflicts that lasted far longer. The Dutch-Sicily war lasted 335 years. Wars between England and France spanned more than seven centuries. The Islamic conquest of Afghanistan itself went on for more than two centuries. In fact, according to an accounting by the Congressional Research Service, America's longest state of war -- in terms of recognized military service -- wasn't with Afghans but with Native Americans. The American Indian Wars lasted from 1817 to 1898.

The more relevant objection is that the length of a war isn't necessarily the most important metric. This is a point Trump has made himself: "As I've said, and I'll say it any number of times -- and this is not using nuclear -- we could win that war in a week if we wanted to fight it, but I'm not looking to kill 10 million people."

That's an exaggeration, but let's assume Trump is correct. Most reasonable people can see how saving time at the expense of near-genocidal bloodshed isn't a desirable trade-off. Time is by no means a costless resource, but given the alternatives, it's often the best choice.

In a sense, we've been in a state of war with North Korea for nearly 70 years. We never signed a peace treaty, and we left troops on the Korean Peninsula to enforce an armistice. In terms of time, that's a big expense, but it's cheap when measured in the more important currency of human life. Similarly, the Cold War was not simply a metaphorical war. We spent American blood and treasure for nearly half a century containing the Soviet Union around the globe. But we opted not to have a direct confrontation because we thought biding our time was a better alternative than a direct confrontation costing millions of lives.

Imagine firefighters spending months battling an inferno in Yellowstone. At what point would you say, "This has gone on too long, it's time to call it quits"?

If you have cancer, you might stop receiving treatment if there's no hope. But, "You've been fighting cancer for a long time now, let's end this endless war" isn't a great argument absent other considerations.

Many compare Afghanistan to the Vietnam War, which until recently held the title of America's longest war. And the comparison has some merit in terms of the mission creep, local corruption and the political dilemma of pulling out of a war without a clear victor (though American fatalities in Afghanistan have been a fraction of what they were in Vietnam). The major difference is that there was little chance of the North Vietnamese using their victory to mount attacks on the American homeland.

The Taliban has never recognized the legitimacy of the Afghan government, and it has never truly separated from al-Qaeda -- in part because the two groups are politically, economically and ideologically intertwined. Even if it were to break with al-Qaeda, there's the vexing problem that the Taliban can't be trusted.

Fully pulling out of Afghanistan would solve one problem: our understandable impatience with a war. But it wouldn't solve the problem that prompted us to send troops there in the first place: the Taliban's capacity to harbor and support terrorists bent on killing Americans.

Problems without solutions aren't problems; they're facts, even if you put a clock on them.