Jonah Goldberg
|
Posted: Sep 26, 2018 12:01 AM
Share   Tweet
The opinions expressed by columnists are their own and do not necessarily represent the views of Townhall.com. 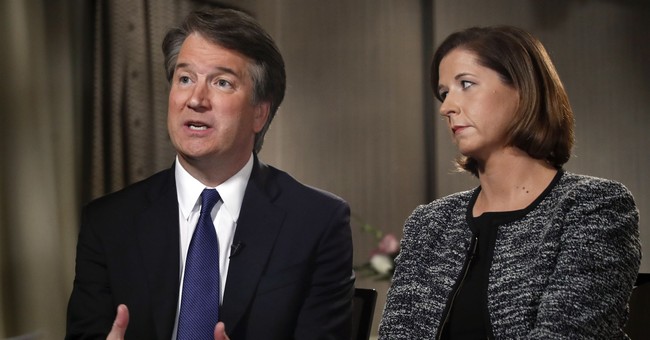 This has become grotesque.

President Trump loves to yell "witch hunt!" at the Russian collusion investigation, but even if he is cleared of all wrongdoing, "witch hunt" is the wrong term. Special counsel Robert Mueller is looking for actual evidence that can withstand scrutiny in a court of law.

Real witch hunts aren't about evidence but rather belief. Inconvenient facts are discarded, and the convenient ones are larded with innuendo and rumor and thrown at the feet of the accused like so much kindling for the auto-da-fe.

Before The New Yorker published an article in which another woman, Deborah Ramirez, conjures a memory of Brett Kavanaugh, this time about him exposing himself, the party line from Democrats and much of the media was that anyone who accuses a man of sexual assault must be assumed to be telling the truth.

Kavanaugh's first accuser is Christine Blasey Ford, who says Kavanaugh tried to rape her 36 years ago in a house she cannot identify, at a time she cannot specify, at a party none of her named witnesses can corroborate. Even the dear friend Ford said was present, Leland Keyser, says she never knew Kavanaugh and does not remember attending the party. She does say she believes Ford though.

And belief is all that matters.

"The truth is, I believe her," said Sen. Kirsten Gillibrand (D-N.Y.). "She has a credible allegation against Judge Kavanaugh."

But even credibility requires more than simply saying the right words or incanting the required shibboleths.

This is misleading on many levels. First, the only senator on the Judiciary Committee to dismiss Ford's claim was Sen. Dianne Feinstein, who sat on it for weeks until it was ripe enough to weaponize. The Republicans instantly offered to give Ford a hearing, in private or in public or even in California.

Second, we don't presume the person whose car is stolen is lying. But we do presume the individual accused of stealing it is innocent until evidence says otherwise.

But when proof is subordinated to mere belief, the standard for evidence is reduced to whatever bolsters the belief. That's why Sen. Mazie Hirono (D-Hawaii) could say with a straight face on CNN that she believes Judge Kavanaugh attempted rape 36 years ago because of the way he decides cases. Countless others have imputed guilt to Kavanaugh because other men "like him" have done bad things. Journalist Frank Rich tweeted, "Kavanaugh's bragging about coaching girls' basketball is troubling in retrospect."

This is the kind of hysteria that drove The New Yorker to "report" that Kavanaugh exposed himself at a party the authors cannot even confirm he attended. (Nor could other news outlets that declined to publish the allegation.)

The accuser, who had never mentioned the story until Kavanaugh was nominated, came forward only after Democratic operatives contacted her, but she "was reluctant to characterize Kavanaugh's role in the alleged incident with certainty." When she asked her friends about the events in question, no one could corroborate it. So, she spent six days "assessing her memories" and decided it must have happened. The only "corroboration" offered is from an anonymous "witness" who wasn't there, but claims to remember someone else saying it happened. In other words: a rumor.

Make no mistake, there are witches out there (or, more accurately, warlocks). We know men have done horrific things. We know that coming forward is difficult for victims, and that they should be treated respectfully. But as G.K. Chesterton observed: "It is one thing to believe in witches, and quite another to believe in witch-smellers."

Wanting evidence from a specific accuser is not a "threat to democracy," as Feinstein claims. It's essential to it. And merely believing otherwise doesn't change that fact.